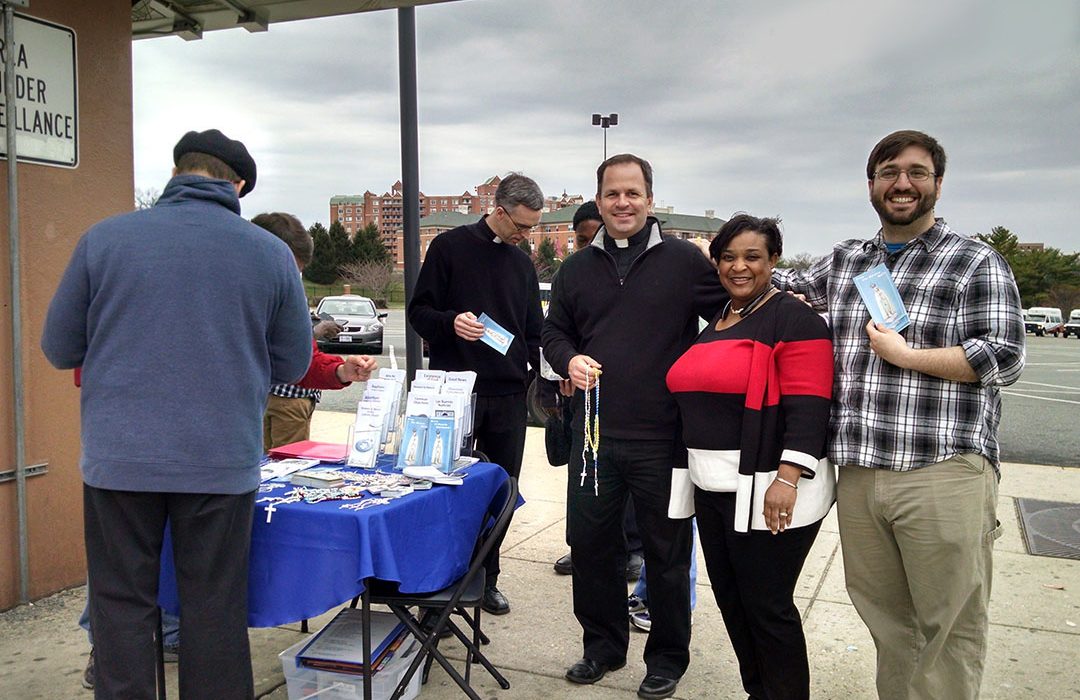 Street evangelization may sound like a foreign idea to some Catholics. However; headquartered here in Indiana, there is an organization attempting to change that. With an international headquarters in Bloomington, the St. Paul Street Evangelization project is developing an outreach to bring the Gospel and the Catholic faith to a public that often has little accurate information about Catholicism.

St. Paul Street Evangelization is a grassroots, nonprofit organization dedicated to responding to the mandate of Jesus to preach the Gospel to all nations by taking the faith to the streets. Christ’s call to evangelize was made to every Catholic Christian, and the Second Vatican Council reiterated this need, urging each of the baptized to bring the Gospel, found fully in the Catholic Church, to today’s culture. As an on-the-street Catholic organization, St. Paul Street Evangelization provides an avenue for sharing the person of Jesus Christ and the truth and beauty of the Catholic faith with people hungry to receive it.

The organization had its beginning in 2012 when founder Steve Dawson, a Catholic from the Detroit area, was stationed in Bloomington with the Franciscan Friars of the Immaculate. Dawson has written several pamphlets and booklets, and his connection with the Bloomington community proved instrumental in the organization’s beginning and establishment. Today, St. Paul Street Evangelization claims 295 teams, or chapters, including 18 outside of the United States. The SPSE website, http://streetevangelization.com, provides dates and locations throughout the Midwest where training and informational education can be obtained, as well as information on how a group as small as two or more Catholics may form a local team.

The basic procedure of an SPSE team is to set up in an area or at an event where there is foot traffic. Teams of two people are positioned for the purpose of answering questions and providing pamphlets or literature to the public. Group members do not force themselves on anyone, but are available for those who might have an interest in knowing more about the Catholic faith. 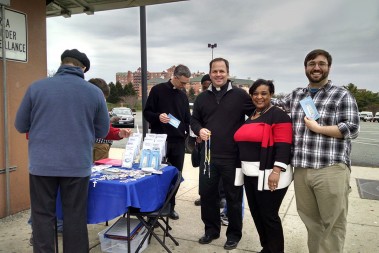 Father Christopher Goodwin, from the Apostolic Nunciature, left, and Father Gregory Shaffer, pastor of Assumption Parish, Washington, D.C., to the right, are pictured following a recent SPSE evangelization outing in that diocese. Father Goodwin is spiritual advisor to a Gaithersburg, Md. SPSE team; Father Shaffer began his own SPSE team in southeast D.C., which is doing well.

Team members often report engaging in conversation with one-time Catholics who have fallen away from the church, or for one reason or another do not actively participate in the church. SPSE representatives do not participate in high profile arguments in an attempt to defend the church with anyone who might want to provoke such behavior.

Participation in street evangelization often proves to be a very worthwhile activity for lay Catholics, who frequently gain an inner desire to learn more about their own faith. It creates a win-win situation, as SPSE members strengthen their own beliefs by sharing the faith with others.

The Fort Wayne-South Bend diocese currently has three active SPSE chapters. One is located in Warsaw, another in Goshen and organizational efforts are underway to activate a chapter in South Bend. The Warsaw chapter is headed by Ida List and calls itself a Parish Evangelization Team, or PET. Those involved participate on the first Friday of the month in downtown Warsaw, usually on Courthouse Square, from 5-8 p.m.; at the Kosciusko County Fair; and they have been available for a few hours on Saturdays at Winona Lake Park. Part of their mission is to greet people by asking if they are in need of any prayers: Intentions are then placed in the parish prayer basket and presented at a Saturday or Sunday Mass.

The SPSE Goshen chapter team leader is Alice Wheeler, while the South Bend chapter is currently being organized by Don Harty. Harty just signed up in January and has recently completed the required training before leading the South Bend outreach. He said he has been impressed with the training, which included appropriate responses for interaction with the public that an SPSE leader might experience.

For further information, visit the website and click on the “Get Involved” and “Locations” tabs for contact information for the chapters that are currently active in within the diocese. Additional resources, an online store and donation opportunities, are found there too. To reach the SPSE by phone, call (657) 777-2963.

St. Paul Street Evangelization outreach has gained considerable traction since its founding just five years ago, and it welcomes inquiry into just what is involved in starting a chapter in any locale. The main ingredients include just two or more members of the Catholic faith and a desire to share the Gospel with others.