A good deal of early Catholic history in northeastern Indiana revolves around the building of the iconic Wabash-Erie Canal in the 19th century. Fort Wayne has two streets named for prominent Catholic Francis Comparet, who hosted priests ministering to the area’s canal workers during the time that the Diocese of Vincennes had jurisdiction over the city. Comparet even notified the diocese that an estimated 2,000 Catholic canalmen had gone roughly six months without access to the sacraments.

Catholicism in Lagro has a similar story to that of neighboring Fort Wayne. According to the local church, many Irish immigrants came to work on the Wabash-Erie Canal’s path through the area. After the canal opened in 1837, many of the immigrants stayed in Lagro. These Irish Catholics needed the sacraments – and therefore needed a church. 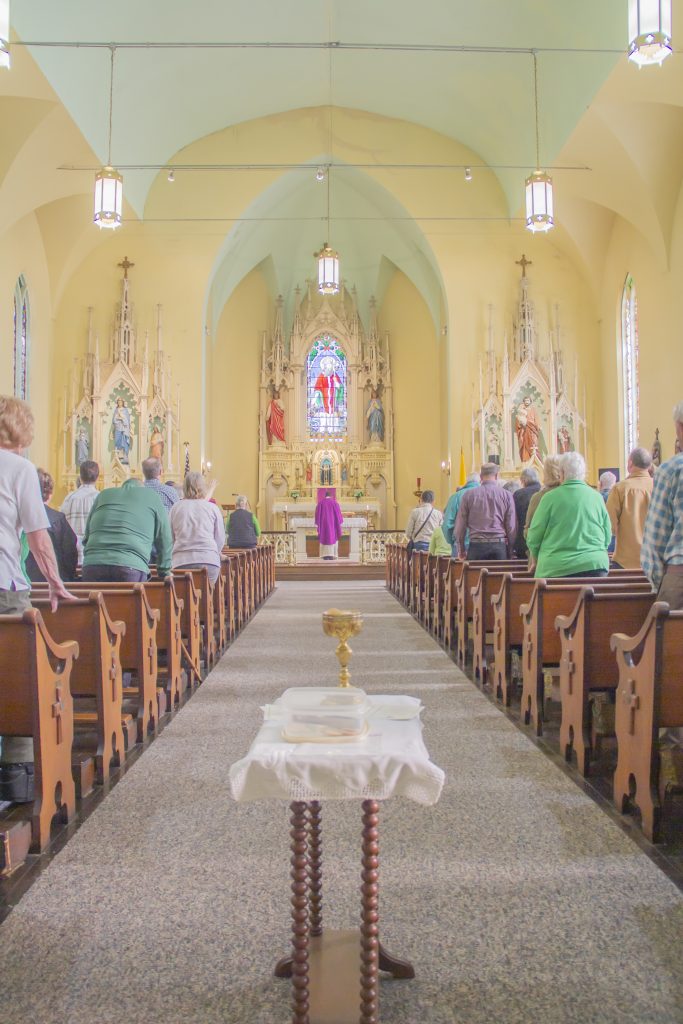 Father Levi Nkwocha talked about the story of St. Patrick in his homily. He also commented that the green dress of the congregation contributed to the celebratory spirit of the annual Irish holiday.

Much of the history of the church building and former parish of St. Patrick in Lagro can be found in an application submitted to the National Park Service (NPS) for recognition in the National Register of Historic Places, which St. Patrick Oratory was granted in the late 1990s.

The church was founded in 1838 on two lots donated by Thomas Fitzgibbon, a contractor for the Wabash-Erie Canal. According to “Worthy of the Gospel of Christ,” the historical account of the Diocese of Fort Wayne-South Bend written by Joseph White, parish records for St. Patrick date back to 1846. Two decades later, Father John Ryan directed that the church building be enlarged. This enlargement included the purchase and installation of the “first bell in the Wabash Valley.”

Ten years later, Father Matthew E. Campion became the pastor of St. Patrick. Father Campion realized that a new church needed to be constructed. The cornerstone for this new and present building was laid June 15, 1870, with dedication taking place on St. Patrick’s Day in 1873. At this time, the church served approximately 300 families.

The building has gone through a handful of changes over the decades. Tie rods were added to support the ceiling around 1938. Initially painted with religious scenes, the ceiling has since been painted over in a solid color.

The organ and gallery of St. Patrick can be accessed by using the hand-carved, curving stairway behind the pews. The gallery extends through the entire width of the building. 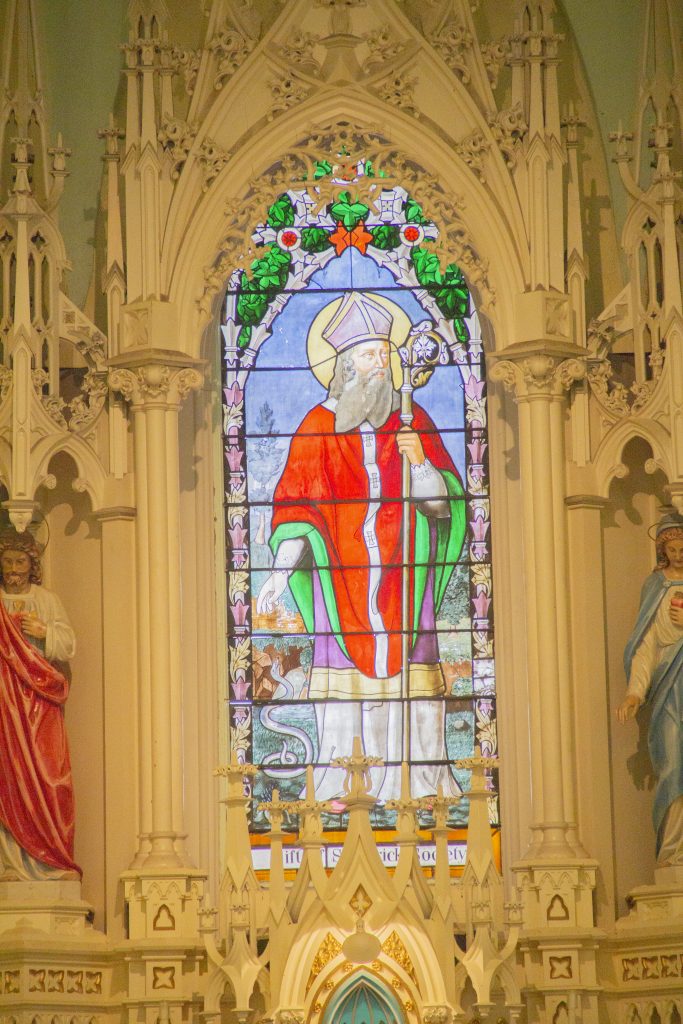 The building’s architectural style stands out in the region. Father Campion built the church in Victorian Gothic style with some additional Romanesque ornamentation. This unique combination of styles, the NPS application states, may have resulted from the pastor’s lack of architectural experience.

As of 1982, the building was one of three regional Victorian Gothic churches rated “outstanding” by Wabash County, with St. Patrick being the oldest of the trio.

The last resident pastor, Father James Rose, left in 1980. In 1997, Bishop John D’Arcy disbanded the parish and made the church into an oratory.

The church’s status as an ‘oratory’ is not particularly common in the diocese. The Code of Canon Law defines an oratory as “a place for divine worship designated by permission of the ordinary for the benefit of some community or group of the faithful who gather in it and to which other members of the faithful can also come with the consent of the competent superior.” This means that an oratory is not a parish church, like one that people would attend every Sunday to fulfill their weekly obligation.

The diocese maintains two oratories: St. Patrick Oratory in Lagro, and St. Mary of the Angels Oratory in Hudson. Oratories do not celebrate Mass regularly, and people will gather 10 times this year to celebrate Mass at St. Patrick. March 17 marked the first Mass celebrated at the building in 2022, and was the 149th anniversary of the building’s dedication. March 17 was also the feast day of the oratory’s patron saint. 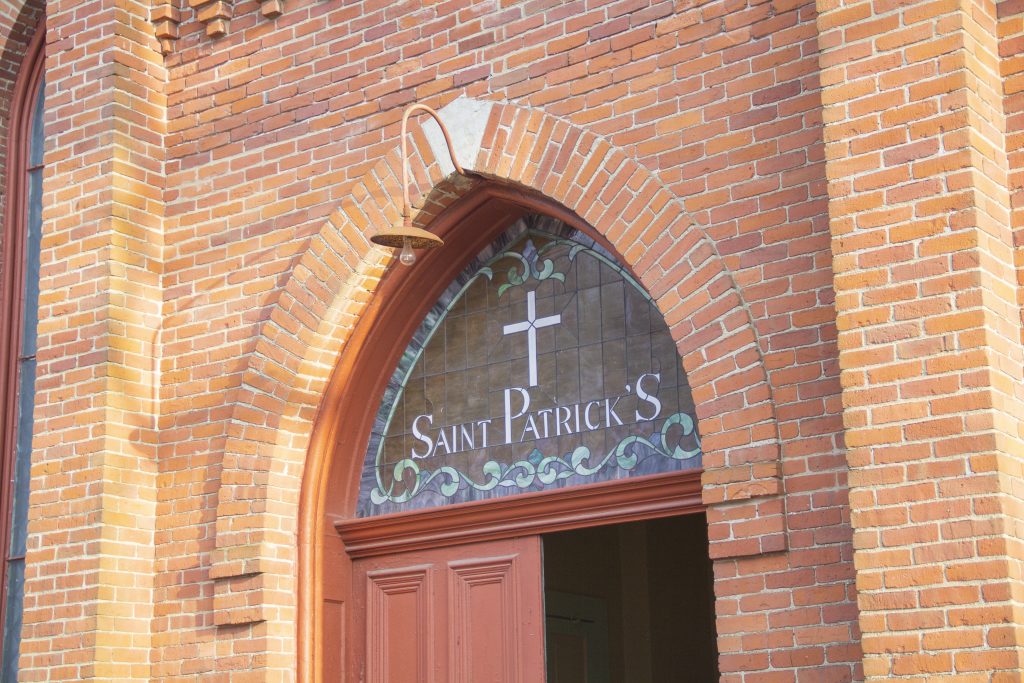 Celebrating the oratory’s first Mass of 2022, Father Levi Nkwocha talked about the story of St. Patrick in his homily. He also commented that the green dress of the congregation contributed to the celebratory spirit of the annual Irish holiday.

St. Patrick Oratory will celebrate Mass nine more times in 2022, on the first Sunday of every month at 11 a.m. Each occasion serves as an opportunity for area Catholics to experience Mass in a building with a rich history, in a town built on the legendary Wabash-Erie Canal.