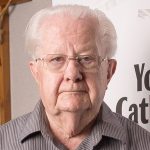 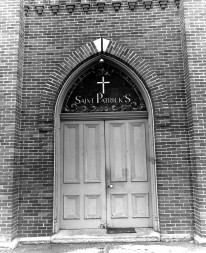 St. Patrick, Lagro, is the first in the diocese to honor the saint.

Can you name them … the locations of six Catholic churches in the Diocese of Fort Wayne-South Bend honoring St. Patrick?

In Arcola, a small community west of Fort Wayne, Father Julian Benoit, pioneer priest, first said Mass in private homes. Established as a parish in 1862, the Poor Handmaids of Jesus Christ arrived to teach there three years later.
If heavenly rewards are based on earthly services rendered, one cannot begin to imagine the celestial rapture still enjoyed by Sister M. Bonaventure Heinsmann who, in addition to being superior of the primitive outpost, taught music, was sacristan, did the church wash and visited the sick in their homes.

Known as the Mother Church of South Bend, St. Patrick Parish listed Touhey, Cooney, Quinlan and Clifford as charter members in 1858, but Germans, Poles, Hungarians and Belgians first worshiped there before spinning off to form their own parishes.

Considering what those settlers did to provide a house of worship for themselves, by hauling stone and timber by ox cart and digging in with pick and shovel for the foundation, their determination and devotion seems unmatched. Moreover, this was done by men who had spent the day building a railroad and worked for 75 cents a day. As they dug and lugged in the evenings, their children stood by with lanterns lighting the scene.

St. Patrick Parish in Walkerton, established in 1856, was first served by Holy Cross priests from Notre Dame who arrived by horseback with Mass in a saddlebag. At the time, the congregation was known as St. Henry’s, but by 1870 when the parish of 19 families built a 45 x 22 foot church for $800, the members, registered as Quirk, Quinn, Murphy, Muldoon, Finnegan, Fitzgerald, and Frank Krankowitz, who got one vote, were inspired to rename their congregation in honor of St. Patrick.

In a section of Fort Wayne so predominantly Hibernian that it was called Irish Town, St. Patrick Parish, established in 1889, was served for its first 73 years by pastors named O’Leary, Delaney and Monahan.
At one time the enrollment of its grade school reached nearly 700 and had a faculty of 18 Sisters of Providence. Through their example and those of its pastors and assistants, many religious vocations began at St. Patrick’s, with 60 joining the Sisters of Providence, 16 became women religious in other orders, and 35 sons of St. Patrick became priests or brothers.

Today, membership there is 85 percent Mexican-American, with the balance made up of Anglos and Vietnamese with Masses regularly offered in English, Spanish and Vietnamese. And although the shamrocks there continue to symbolize the Trinity, now quite appropriately, also emblematize the universality of Christ’s Church with three cultures harmoniously blended in one belief.

Nineteen centuries after Christ was born in a stable, He was present and worshiped as the Blessed Sacrament in another stable in Ligonier. “The Stable” is a term affectionately used for a former carriage house and barn which was one of the houses of worship that has served the Catholics of Ligonier and still comes up in conversation among senior parishioners.

When St. Patrick, Ligonier was founded under the direction of Bishop John Henry Luers, Masses were held for about seven families in the home of Henry Zonker and then in a log cabin type church on Martin Street where in winter, parishioners were warmed by a potbelly stove. Depending upon the weather, folks arrived on foot, on horseback, or in buggies, wagons and sleighs. Going to Mass called for planning and effort with no guarantee that a priest would be present; once or twice a month was a good average.

A significant chapter in the development of the Midwest as the faith was planted there is related to the building of the Wabash and Erie Canal, particularly in Lagro, where the first of the six churches named for St. Patrick was founded in 1838.

The canal diggers were Irish, with some settling in Lagro and become the charter members and builders of the first Catholic church.

Today, like ancient ruins, remnants of the Jim Kerr canal lock remain not far from St. Patrick’s, which is now an oratory, with a Mass said at 12:30 p.m. on the first Sunday of each month, and is administered by St. Bernard Parish, Wabash.

Although the pioneer spirit, style and sacrifice are etched in the history of each of the St. Patrick parishes, none captures the drama or determination of those early Hoosier Catholics as well as the story of “St. Patrick’s Bell” in Lagro.
It was there in the spring of 1848, that a young man named Pasque, owner of a good team of oxen and a strong wagon, was dispatched to Toledo, Ohio, with cash in hand to purchase a church bell.

Fording streams, camping and seeking shelter and food with settlers, Pasque and his team made their way with slow heavy steps.

In Toledo, no such bell could be found, and Pasque was directed to a foundry in Bethlehem, Pa., where once again he was disappointed and moved on to Buffalo, N.Y., where a suitable bell was found.

Back in Lagro, gazing at a vacant belfry, some quietly observed that perhaps Father Ryan had shown poor judgment by trusting “the young man” with the bell fund which had taken years to accrue.

Their muttering turned to cheers when nearly a year after his departure, the weary team and their drover showed up with the bell which soon could be heard miles away.

From the majesty of St. Patrick Cathedral in New York City and the luster of the luminaries who appear there to remote places like Lagro, where St. Patrick’s had its golden age in the distant past, the love of the Irish for the faith and their patron continues to inspire, highlighted in gold and green through the ages.