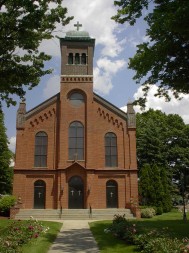 AVILLA — St. Mary of the Assumption Catholic Church in the village of Avilla has long been the spiritual home of hundreds of Indiana Catholics in Noble County. It was established in 1853, thanks to the work of missionary priests Father Stephen Badin and Father Simon Lalumine, who ministered to the fledgling Catholic community in that area.

Founding priest Father Edward Faller led eight families in worship in a small frame building which he had constructed on land donated by John Geiser, and ten years later, opened the only Catholic elementary school in the county.

However, parish records credit Father Dominick Duehmig, a zealous pioneer missionary priest who became St. Mary’s pastor in 1876, for erecting the church which stands today. It was originally constructed for $8,600 and was nearly 5,000 sq. ft. in size.

Under his 37-year administration, the parish grew and thrived and became known as the Mother Church of the surrounding area. He was also instrumental in persuading the Sisters of St. Francis of the Sacred Heart to come to America and locate at Avilla where they taught in the elementary school and cared for the aged in what later became Sacred Heart Home. 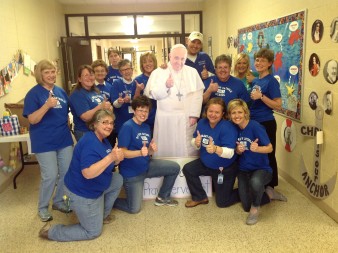 St. Mary’s School continues to this day as the only Catholic elementary school in Noble, LaGrange and Steuben counties and draws students from Blessed Sacrament parish in Albion, Immaculate Conception parishes in Kendallville, Ege and Auburn, St. Joseph parishes in LaGrange and Garrett, St. Anthony in Angola, St. John Bosco in Churubusco and St. Gaspar in Rome City.

One hundred sixty-three students are currently enrolled in pre-kindergarten through eighth grade, and it is clear that their parents understand the importance of the school’s Catholic identity and want that education in the faith for their children.

First year principal Jane Sandor outlines those faith-centered activities. Each day staff members gather for prayer and reflection, then join students for morning prayer in the school gym. This year’s spiritual focus has been on the virtue of hope, she says, and the Act of Hope is recited daily. Physical well-being of the body as a temple of the Holy Spirit is nurtured, as well, with participation in a “mileage club” as part of students’ physical education. A rigorous curriculum with a multidisciplinary approach used in many subject areas and at all grade levels brings students’ mental acuity to its highest level.

Sandor notes that the distinction of being the only Catholic elementary school in three counties brings with it a three-fold responsibility: One, maintain the strong traditions evidenced by the longevity of the parish and school, two, maintain a fervent and rich faith life, and three, provide the leadership for growth.

Various parish ministries also help to strengthen St. Mary’s, like the Altar and Rosary Society headed up by Henrietta Harris. With a membership of more than 50, the group sponsors a Christmas bazaar in conjunction with a local restaurant in December and holds a spring bake sale before Easter. This year the latter netted nearly $500, which Harris says is “good for us.” She is a long-time member of the parish, as were her parents and grandparents before her. “It’s part of my heart,” she says fondly.

Katie Herendeen, RCIA director, instructs those who wish to enter the Church. Some candidates are those planning to marry at St. Mary’s but many are parents of students who attend the school. It’s a ministry she finds very fulfilling. She enjoys the parish community and says, “I like the intimacy of a smaller church.”

Barb Braley wears more than one hat at St. Mary’s. She is the church organist at the 8 a.m. Sunday Mass, a job she took on as “a temporary thing” 20 years ago, she says, laughing. She is also CCD religious education director for kindergarteners through 12th graders. Along with six other teachers, she educates 36 students in the faith each week and prepares them for the sacraments. Recently 16 children received their First Holy Communion and several received the Sacrament of Confirmation, all in one week. She calls St. Mary’s a busy parish and “a great place to come visit.”

Father Daniel Chuckwuleta, a native of Nigeria, has been assigned to St. Mary’s as pastor the past four years. He loves its school and is said to share the faith beautifully through his excellent homilies at children’s Masses. The most important quality of the parish is its sense of Christian community, he says.

Principal Sandor believes that tradition is important at St. Mary’s. Though she is speaking of the school, her observations apply to the entire parish, as well. “It has withstood the test of time because of the strong faith traditions and the ever present multi-generational influences.”

St. Mary of the Assumption is strongly rooted in that faith which has been preserved through the decades by many generations of northeast Indiana Catholics.