“What do women do at St. Margaret’s House?” a reporter once asked its founder, Episcopalian Deacon Sarah Tracy. 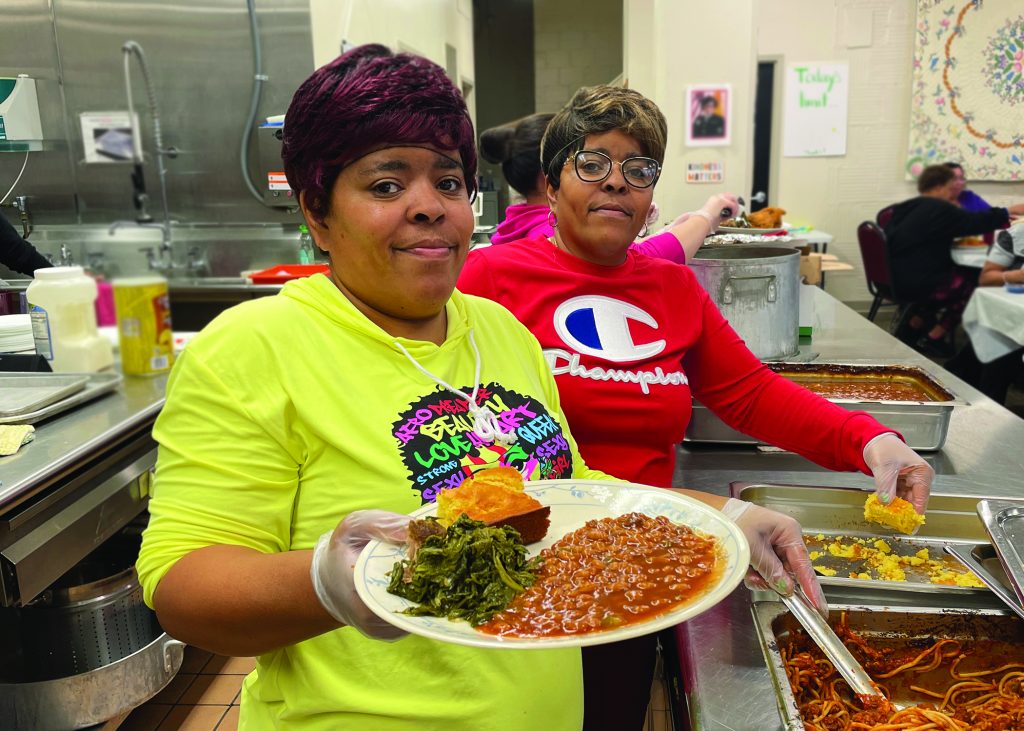 Photos provided by Cathy Hall
Stacey and Tracey Denson enjoy serving a special lunch at St. Margaret’s House in South Bend during Women’s History Month earlier this year (and yes, they are twins).

Greeters record the names of every woman who walks through the door, and everyone is valued for her unique gifts and experiences, not categorized in terms of her problems and needs. Guests, staff, and volunteers form a lively community that specializes in supportive hugs. For the 25th anniversary in 2015, several doors were covered with portraits of every guest during that entire time. More recently, Saint Joseph High School Fine Arts Teacher Mary K. Kagel took stunning photos of every willing guest. These have been transferred to fabric, decorated with embroidery, and framed. A staff member remarked, “It’s amazing how transformative it is when you look for the beauty in each woman.”

During a tour of the once-dingy and dilapidated industrial building refurbished to make a cheery, welcoming home space, one could see children playing, a woman sleeping soundly on a couch, a college student organizing donated toiletries, friends sitting at a table catching up with each other, an artist putting the finishing touches on a silk scarf, older ladies preparing to dish up a hot lunch, and a potential volunteer learning about the many ministries of St. Margaret’s House, named for the 11th-century Scottish queen and mother of eight who was a skilled needlewoman with a heart for the poor. St. Margaret’s House operates as a day center for women and children in dire poverty. 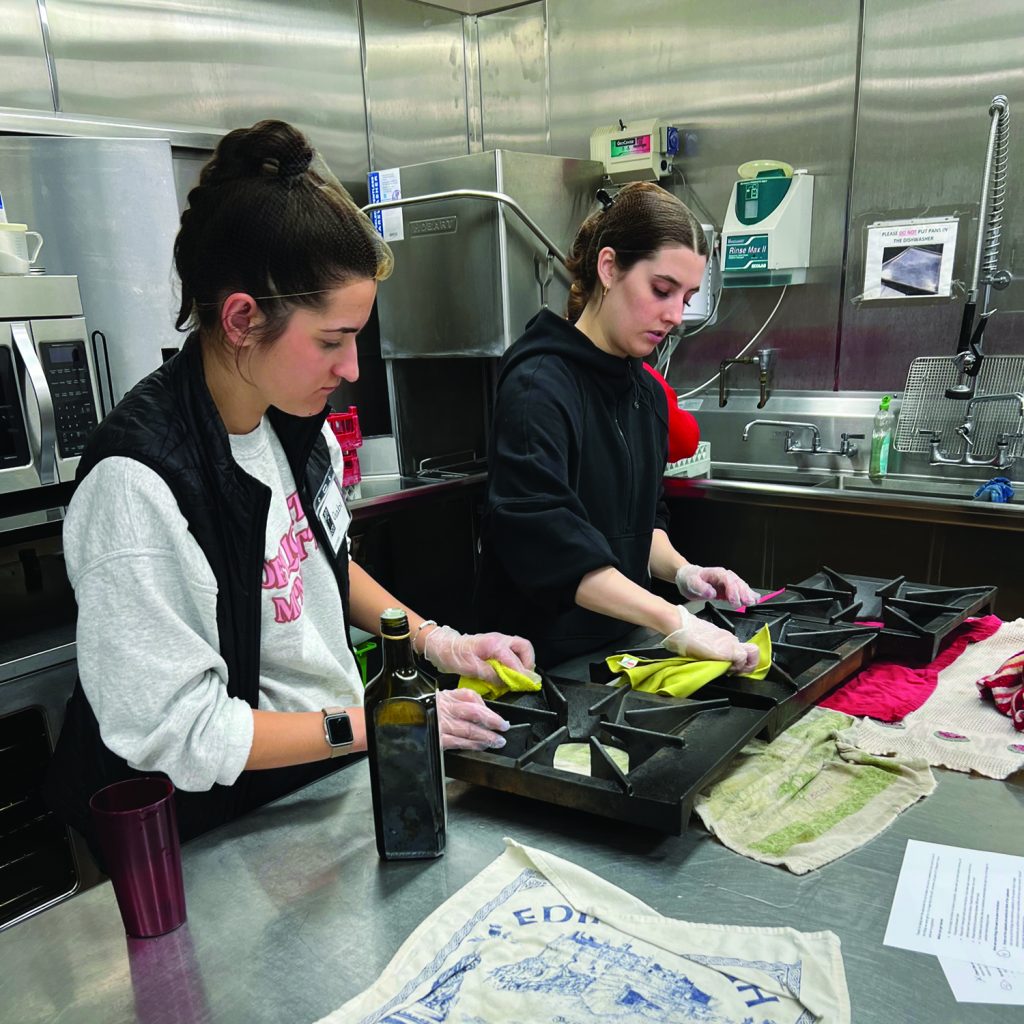 Deacon Tracy’s vision for St. Margaret’s House came from seeing women hanging around downtown during the day with nowhere to go and nothing to do. She enlisted aid from friends to clean a small area in an unused building and bring sandwiches to hand out at lunchtime. Despite widespread distribution of flyers, it was more than two weeks after opening the doors in June of 1990 before anyone came. But the first woman brave enough to walk in, a single mother who needed to do her laundry, felt so welcome that four days later, she was asking if she could become a regular volunteer.

Open from 10 a.m. until 4 p.m. every weekday, St. Margaret’s House has guest services staff who spend time after lunch with each new woman, learning about her interests and telling her about in-house services, classes, and gatherings. Some women make 117 N. Lafayette their mailing address. Referrals are made to other agencies that can assist with everything from emergency housing to legal representation. St. Margaret’s House has long and strong connections with the YWCA of Northern Indiana’s shelter for abused women, the Christ Child Society, Motels4Now, Hope Ministries, and many other agencies. 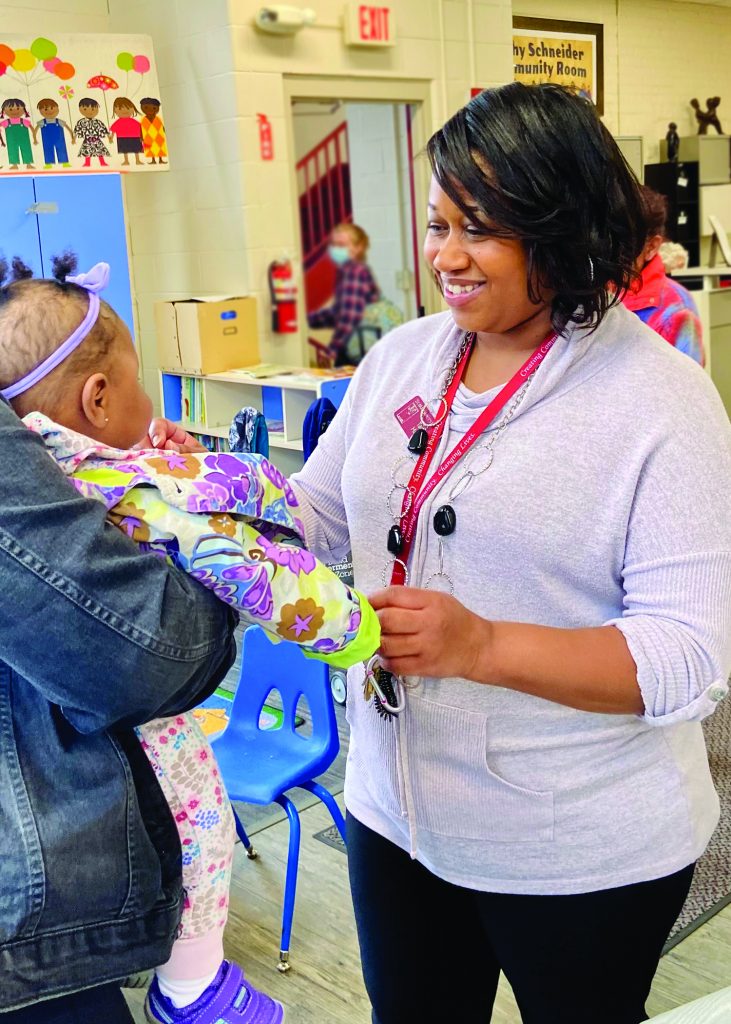 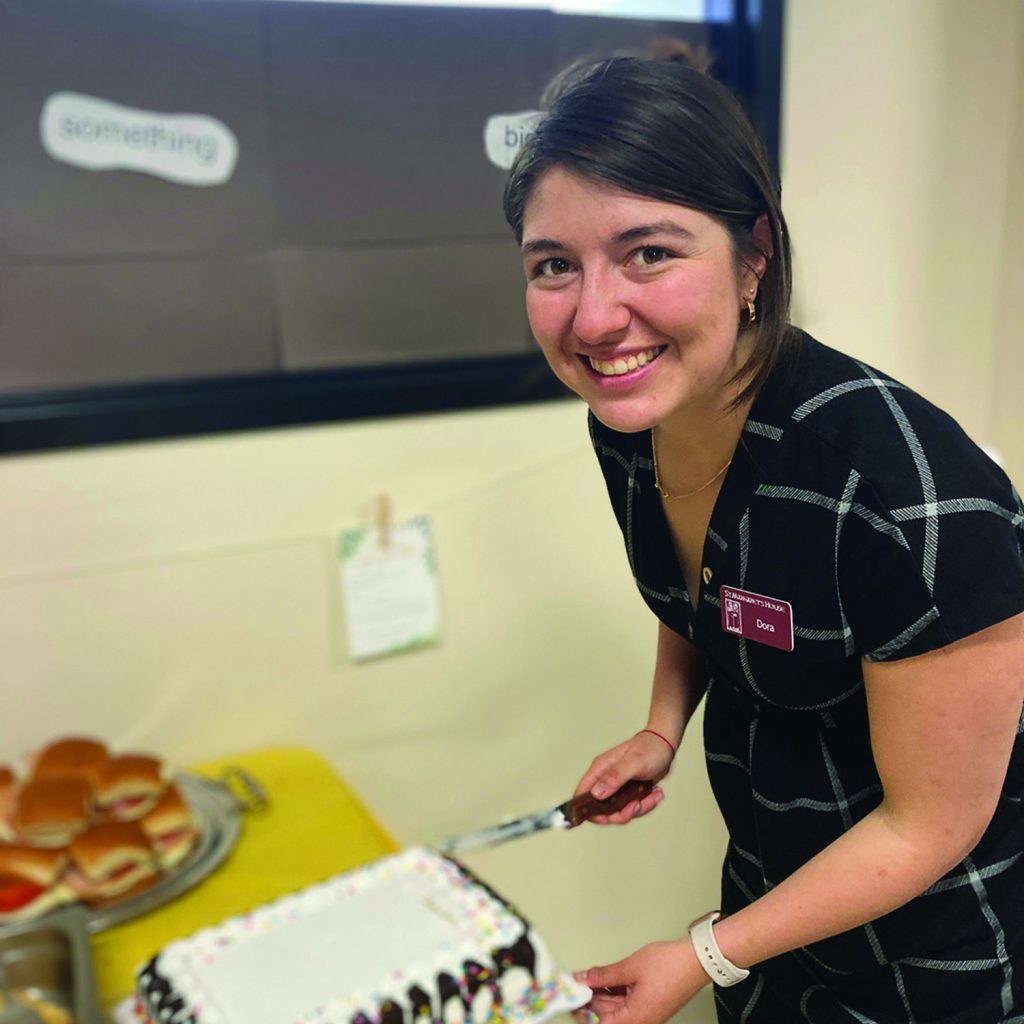 Although the founders and the empty building belonged to the Episcopal Cathedral of St. James in downtown South Bend, it wasn’t long before local Catholics became involved in the center’s mission. The current Executive Director, Katie Elliot, and several of the 14-member paid staff are Catholic, and parishes including St. Pius X in Granger and South Bend parishes Sacred Heart, St. Jude, St. Augustine, Christ the King, Corpus Christi, and St. Thérèse Little Flower have long supported the outreach with their prayers, financial gifts, labor, and material goods, as have the Sisters of the Holy Cross. The children of St. Margaret’s House have a brighter Christmas because of several parish Giving Trees. St. Patrick Parish opened its doors as an emergency warming space during a very cold spell. Saint Joseph and Marian High School students volunteer regularly at the shelter. Third graders at St. Joseph Grade School have adopted this as their project for the year. They tour in small groups and gather the items most in need at a given time, whether books, mittens, or deodorant. They send things for Valentine’s Day, and make personalized placemats for the annual Thanksgiving feast. Two young ladies who first learned about St. Margaret’s House in third grade are now very involved as university students.

Before lunch, everyone gathers in the dining room. It is a time for announcements and sharing victories, needs, and prayer requests. One day, one woman wanted to know where she could vote. Another shared that her granddaughter’s murderer had finally been apprehended, news greeted with many hugs. A third launched into a heartfelt grace before lunch. 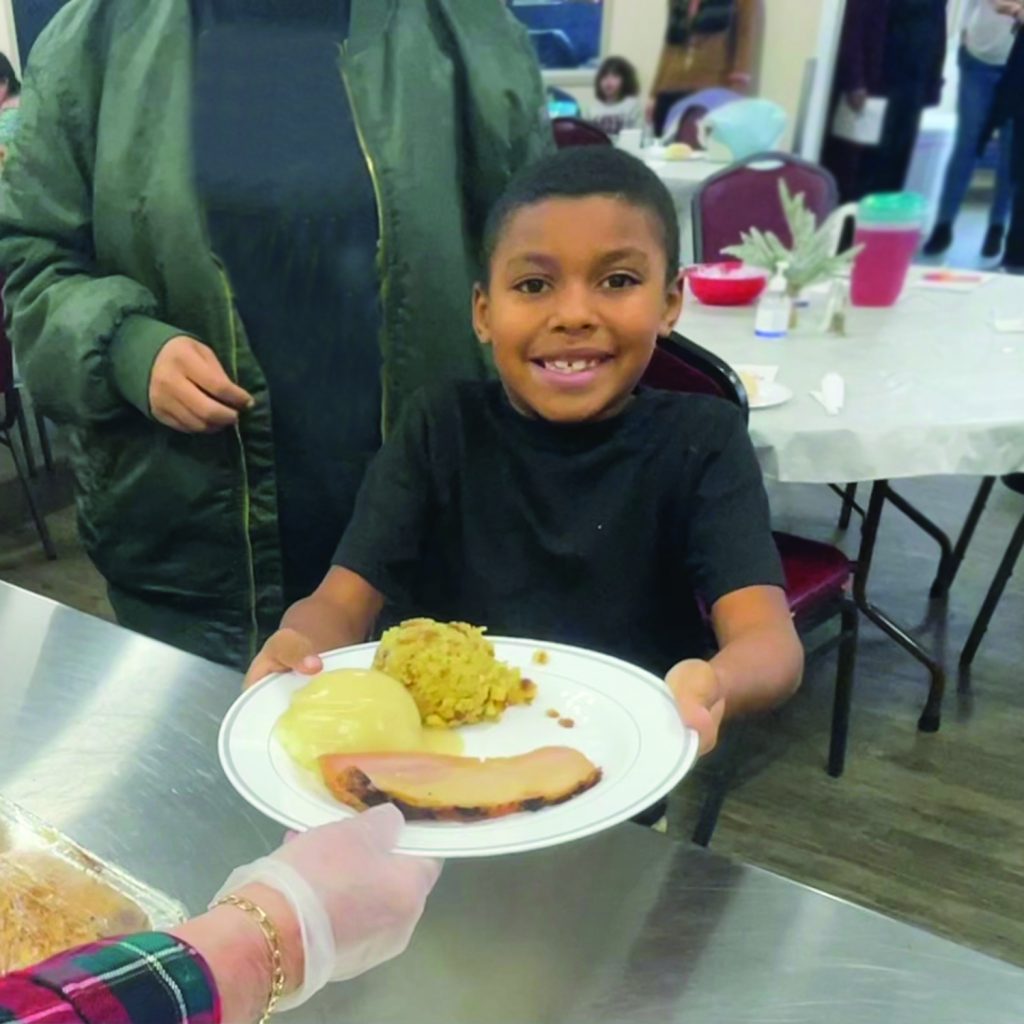 St. Margaret’s House has evolved organically. It was the guests’ idea to assign chores. As one remarked, “I’m important. I fill the salt and pepper shakers.” Faithfulness to her job for a month entitles each woman to receive a bag of toiletries and “shop” in the clothing boutique.

In-kind donations come from countless individuals and also from Whole Foods and the Food Bank of Northern Indiana. Goodwill picks up donations St. Margaret’s House can’t use, like men’s clothing, in exchange for vouchers women can use for items too large to carry through the streets or on the bus that brings most women to St. Margaret’s House.

In the art room, master artists supervise the creation of silk scarves that are sold on Etsy as well as at local craft bazaars. A world map on the wall in this room has marks for places all over the world where those scarves are now worn. Guests often find art activities healing.

At St. Margaret’s House, women can bathe, shower, or launder clothes. Yoga and movement/dance sessions are popular. Community-building “circles” build trust and friendship. The 28-week S.E.L.F. program addresses safety, emotional awareness, and dealing with loss so that women can move on to hope for the future. 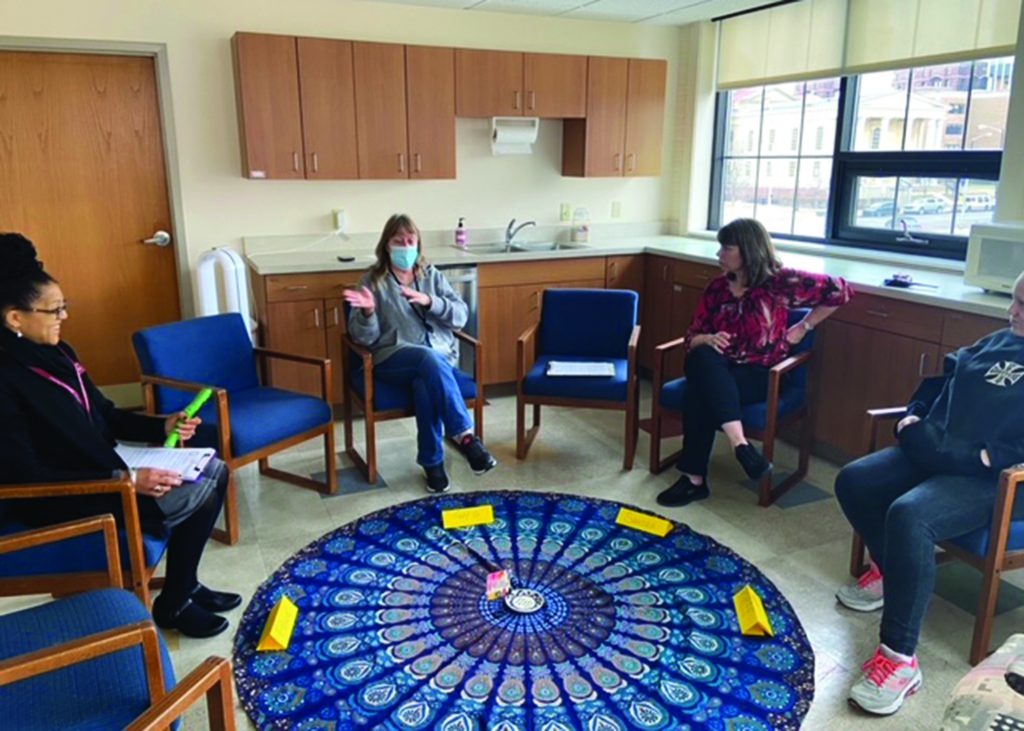 St. Margaret’s House guests and staff members talk during a community building circle, one of the many programs offered to guests.

St. Margaret’s House is open to any woman and her children, no questions asked. There is no proselytizing, but the ministry is firmly anchored in the Gospel values of Matthew 25: giving food and drink to the hungry and thirsty, welcoming the stranger and clothing the naked — literally. Director of Marketing Cathy Hall remembers a time when she quickly covered a woman who emerged from the shower without realizing there were repairmen on the floor; men aren’t usually allowed, even teenage sons unless it is summer vacation. 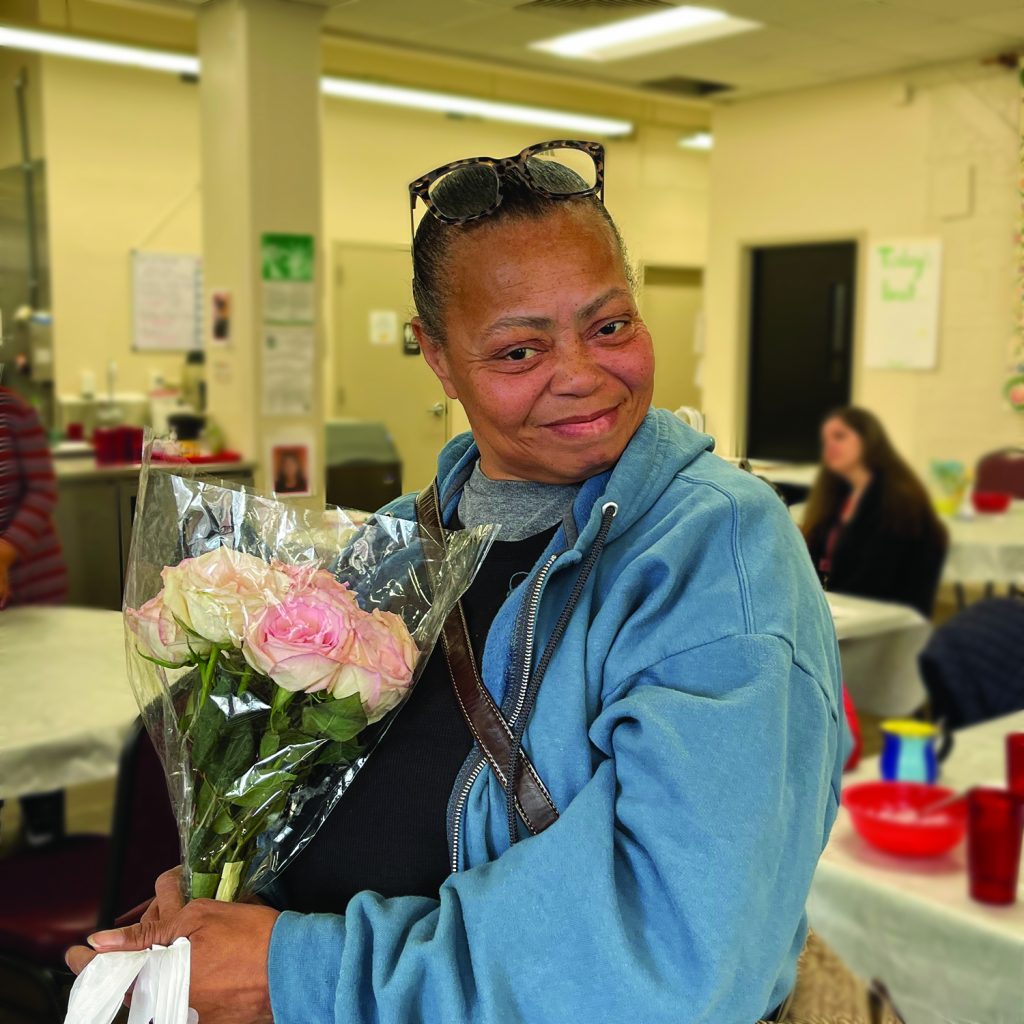 Iris Plump enjoys a bouquet of flowers donated by Trader Joe’s as part of a partnership with St. Margaret’s House.

Besides regular contributions from many churches, fundraising events have included an annual winter walk, which has sometimes included city officials in high heels “walking a mile in her shoes”, and a May “Undie 500” that brought in 3,000 pairs of new underwear. “The Common Thread” this fall featured storytelling by volunteers and guests alike, sharing how this community has impacted their lives. Guests credit it for everything from sobriety to regaining custody of their children, and volunteers and staff agree.

“I first came with the intention of helping others,” admits Hall, “but then we started sharing our lives.”

In 2021, 161 volunteers served 1,200 guests and 29,000 meals; with the easing of COVID restrictions, those numbers are trending upward. The 80 women and children who drop in every day are grateful for the warm welcome they receive. So are the volunteers.