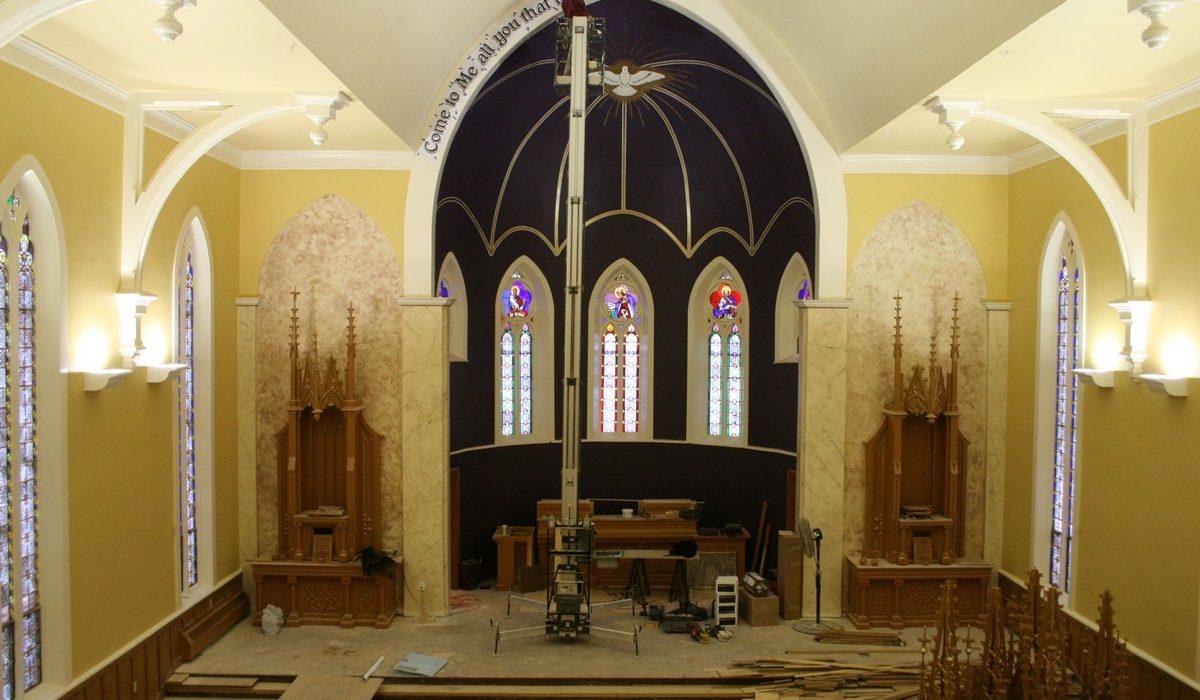 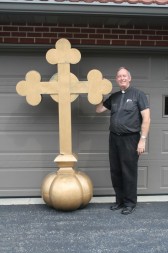 Father Steve Colchin, pastor of St. Louis Besancon Parish in New Haven, stands with the cross that was regilded and placed on the church on Oct. 2, 2013, as part of the renovation project.

NEW HAVEN — The parishioners of St. Louis are patiently awaiting their return to a newly renovated church. Since June 9, 2013, the faithful of Besancon have been celebrating Mass in their recreation hall as their hallowed space undergoes a stunning transformation.

On the feast of St. Louis the year prior, a capital campaign kicked off to raise funds for the much-needed project coined “CRP” or Church Restoration Project. In his fundraising pitch, lifetime member of the parish, Darrel Dodane, reminded fellow parishioners of the sacrifice that the early founders made to build the church and how he felt it was the responsibility of current members to preserve St. Louis for future generations.

Father Steve Colchin, who has served as pastor at St. Louis since 1997, was very pleased with the overwhelming response from family and friends of the parish, saying, “Because of the generous support of so many, we were able to meet our goal of $675,000 quickly.” Soon after, architects and decorators were hired, various subcommittees were formed, months of meetings transpired and the process began. It is estimated that the church was last painted nearly 40 years ago and the stained glass windows were restored two decades ago.

The total restoration of the structure, built in 1871, includes extensive exterior work as well as a major interior makeover. One of the first undertakings was repainting the steeple and re-gilding the gold cross, which reaches high to the eastern Allen County sky. A new “Decra” roof was put on to match the three other major buildings on the parish grounds. The shamrocking on the outside of the church was repaired and repainted and all new storm windows were installed. 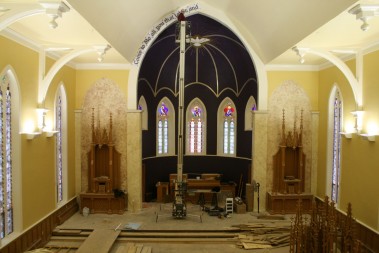 Most recently completed, the exquisite apse dome is now graced with a dove, symbolizing the Holy Spirit and the verse from Scripture: “Come to me, all who labor and are burdened, and I will refresh you,” another special feature noticed in old photographs and brought back from years gone by.

The roof of the sacristy was also lowered approximately 20 inches to allow the change to a hip roof on the back. In addition, all new doors were installed. The front steel doors were each made three inches wider as Father Steve Colchin has always quipped, “Two fat men and a casket could not get through.”

Among the many changes inside, a row of pews was removed from the rear to allow for a funeral viewing area. The former cry-room was converted to a fully handicap accessible restroom and a reconciliation room. A new, slightly larger cry-room was placed on the other side. The extremely steep steps to the choir loft were flattened and the south wall was completely reinsulated. All of the pews were removed and refinished in a rich oak stain.

Altars were graciously gifted from Bishop Leonard Blair (former Toledo bishop and now archbishop of Hartford, Conn.) and St. Anthony Parish in Toledo, Ohio. Home to early French settlers, it has been a goal of the committees at St. Louis to incorporate all of the old, along with the new, during the renovation. The former Altar of Repose is now the Altar of Sacrifice and the columns are being used in the ambo.

The old capitols from the top of the holy water font were also modified. Now all the columns will be Corinthian style adding a look of sheer beauty and elegance to the purple eggplant paint scheme paired with three shades of gold. All new lights and fans were also added.

Another eye-catching highlight includes the exposure of the center window featuring St. Louis for the first-time ever in the history of the church. Donated by former St. Louis pastor and diocesan legend, Father Julian Benoit, the window had previously been hidden for over a century. “Uncovering the window was one of the major goals of our CRP,” detailed Father Colchin.

Like all projects, a few unexpected setbacks have occurred adding to the length of the renovation of the small country church. “Early on, we discovered rotted 12-foot floor joists that had to be replaced,” explained Father Colchin. Other minor issues along the way and the bitter cold this winter have slowed the process, but for the most part, all has gone smoothly and a Mass of rededication with Bishop Kevin C. Rhoades will be planned for some time in the early spring. 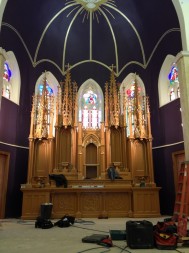 Left on the list, is the installation of the pews and the combination of porcelain tile and carpeted flooring. As the completion draws near, hundreds of volunteer hours from countless parishioners have brought the spectacular project to this point. Services were rendered from architect, Sam Jones of the Troyer Group in Mishawaka, local interior decorator Jo Dommer, local artist Rick Fisher and the Jack Laurie Flooring Group, under the direction of Bart Albright.

Father Colchin was also impressed with Robert Koors, owner of Custom Building and Design, and his crew, and said, “They were so easy to work with and really went above and beyond their duties.”

All in all, the long-awaited completion will be a magnificent and dramatic change for the people of Besancon. Eileen Renier, who will turn 93 this month and has lived within the church steeple’s shadow most of her years, concluded, “I am so happy I will get to see the fruition of this project in my lifetime.”