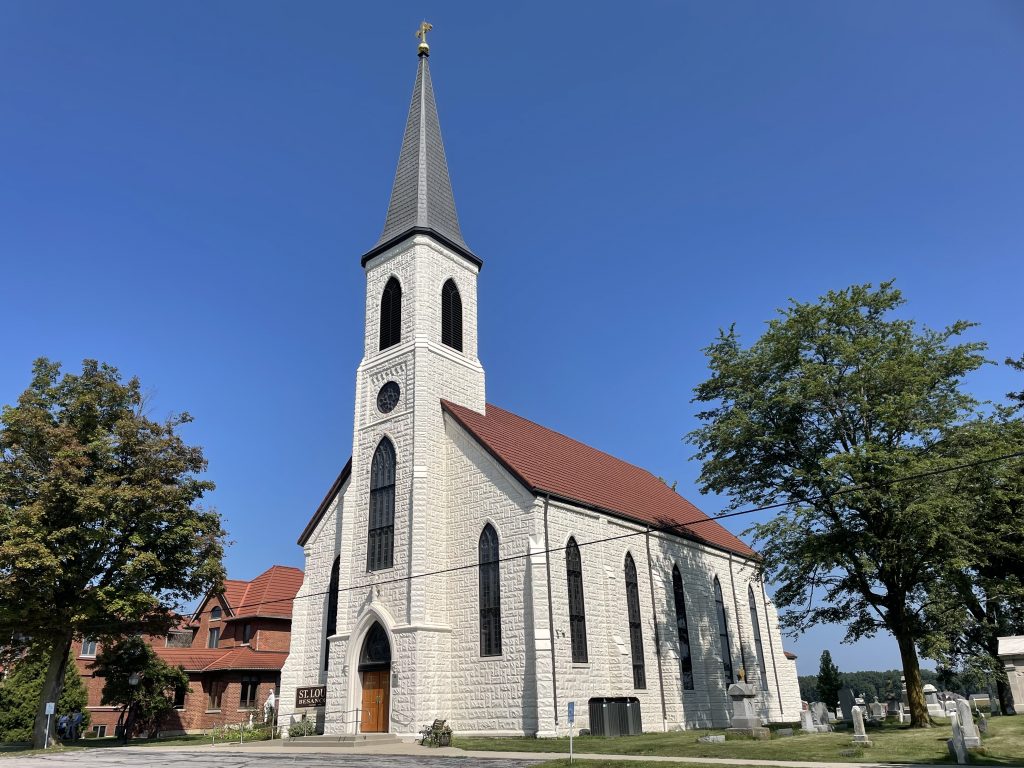 The church building today looks much different from the initial log cabin of its founding. The building was built of brick but later made to look like stone.

After St. Louis pastor Father Louis Fowoyo celebrated Mass, the parish observed the occasion with a lunch in their Besancon Hall, which was built in 1948 and rededicated in 2018. The children of the parish marked the anniversary with bubbles and sports at the academy playground.

Father Fowoyo said one of the outstanding aspects of the community at Besancon is its self-giving nature and self-knowledge.

“What I like about the community is the sense of identity,” said Father Fowoyo, “because everyone feels that they belong to the parish. That is the life of the Church.”

“The family should be the domestic church, but a parish also should be like a family.” 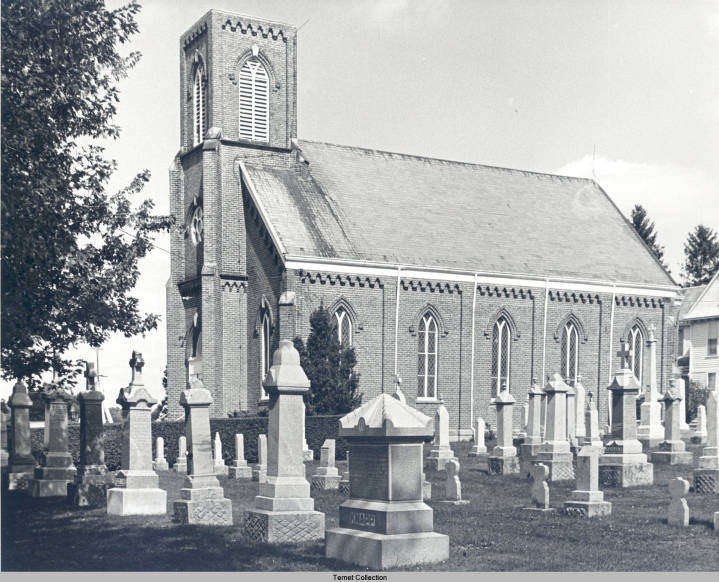 Allen County Library
The brick St. Louis, Besancon Church before it was made to look like stone.

Father Michael Louen, pastor from 1908 to 1916, started St. Louis Academy — the parish school. The Sisters of St. Agnes initially managed an older school, St. Joseph, which opened its doors in 1900. The school reopened in 1910 under the guidance of three Sisters of Notre Dame, until a fire of unknown origin destroyed it Jan. 29, 1915.

“What I noticed very uniquely about the school,” Father Fowoyo said, “is that almost all the teachers have their children in this school. And if you have a school where the teachers have their children, they will be committed to that school. Even the principal has three children in the school. And when people are committed to something they will do it well.”

The church was built by French settlers in 1846, while the area was still under the jurisdiction of the Diocese of Vincennes. For a time, the area was also called “New France” by the settlers, before they shortened it to Besancon. The fleur-de-lis, a well-known symbol of the French, can be found in many places within the church building.

Initially a log structure, the church was replaced by a permanent brick building built by a man named Frank Sallier. According to records, C. F. Lomont and Joseph Dodane financed most of the project.

The first resident pastor of the parish, Father Grevin, did not arrive until several years later, in 1864. Later, the brick building was covered in cement-mortar to give St. Louis the appearance of stone. The cement-mortar was repaired and sealed with cement paint in 1998. 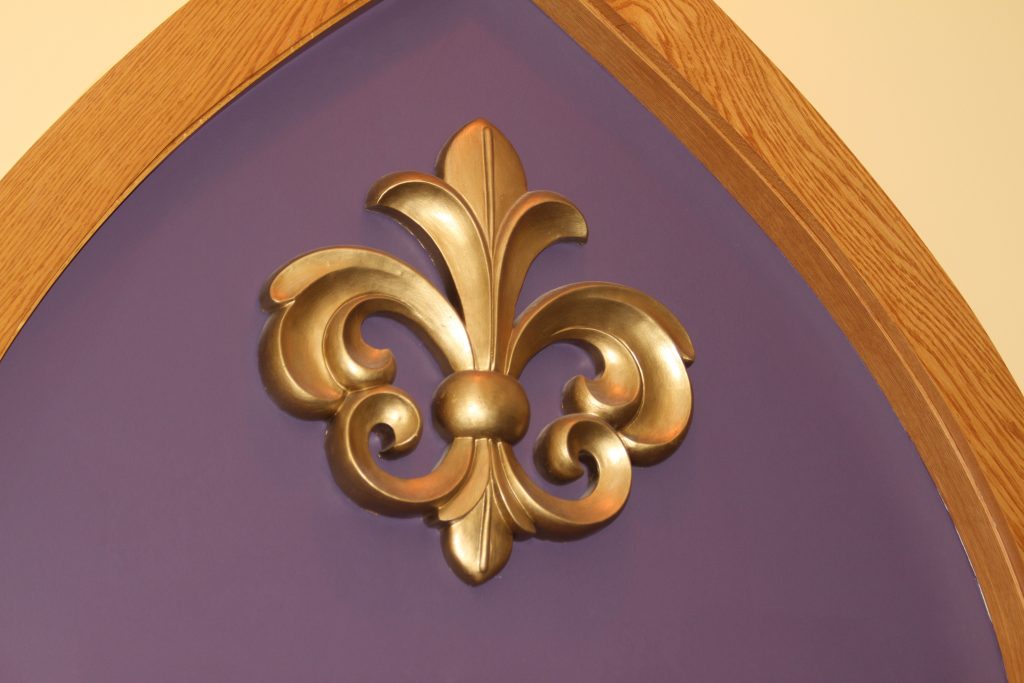 The fleur-de-lis can be found in many places within St. Louis, Besancon Church. It is one of the most well-known symbols to the French people.

The church’s name comes from St. Louis IX, king of France from 1226 to 1270. The only French king to be canonized a saint, St. Louis is the patron of France and is held in high regard by the French people. The city of St. Louis, Missouri, is also named for the 13th century king.

“As we are happy every year, on Aug. 25th, to celebrate the feast of St. Louis,” Father Fowoyo said during the anniversary Mass, “let us recall and try to emulate him in his virtues as he strived to follow Christ while he was on earth.”

Elaborating on the saint’s childhood, Father Fowoyo gave some context on the time period in which the monarch lived.

“Up until the 18th century, France, just like in many other parts of Europe, was under the leadership of kings and emperors. Many of them who were not constitutional monarchs reigned supreme with absolute power. They determined the life of the state and talked like gods. They were referred to as the ‘supreme’ or ‘imperial majesty.’ Their words were orders to be carried out. 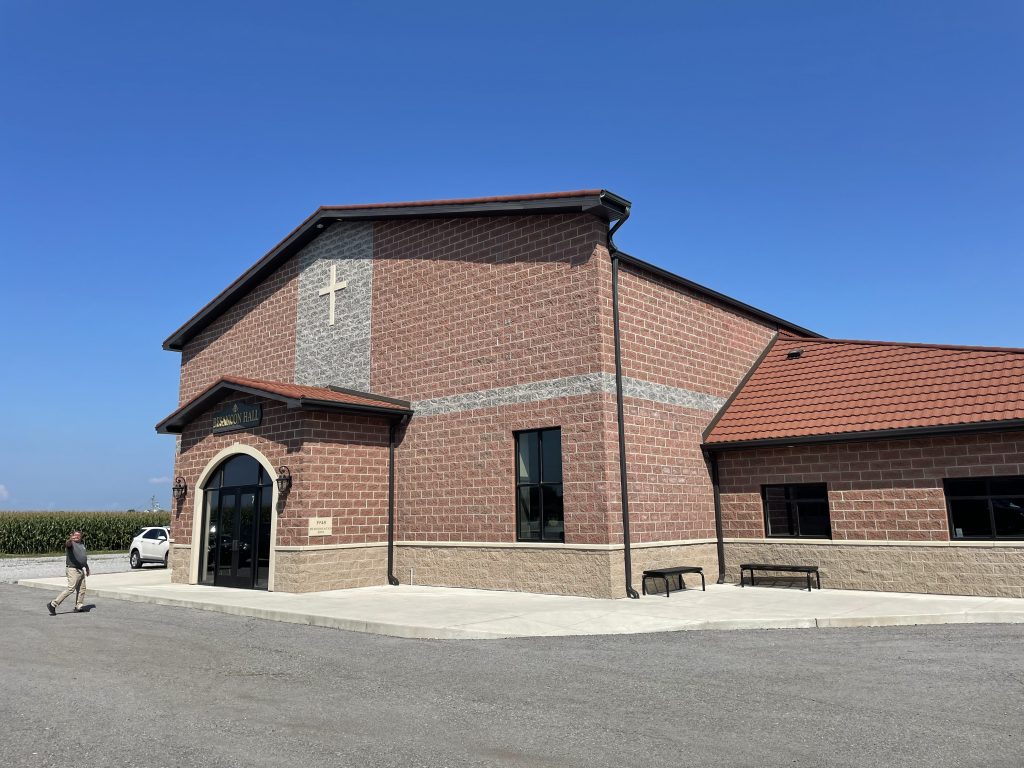 Besancon Hall, at St. Louis, Besancon Parish, was built in 1948. The school, seen attached at right, was expanded so each grade could have its own classroom in 2018.

“As a result, there was a tendency for them to enslave their subjects and spend recklessly. The character of each determined the way he or she ruled their people. Some were nice, others were tyrannical.

“Among the good ones was Louis IX, who was also referred to as Louis the Pious. He was the son of King Louis VIII, who died before his son was old enough to be king. His wife, Blanche, the mother of the future St. Louis, served as regent until the son was matured enough to be king.

“The mother brought him up in the way of the Lord and would always say to him, ‘I love you, my dear son, as much as a mother can love her child — but I would rather see you dead at my feet than that you should ever commit a mortal sin.

“Louis was a man of great faith in God and would never allow any injustice in his kingdom,” Father Fowoyo emphasized for parishioners on Aug. 22. “He was never heard to speak or do any evil thing of anyone. His passion for justice made him transform the feudal system into a highly organized royal court of justice.”

The Besancon Historical Society is headquartered at the parish. According to its records, Father Julian Benoit administered for a time to the needs of the rural community at Besancon. 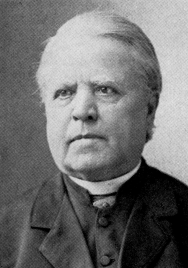 St. Vincent de Paul Parish website
Father Benoit is credited with building the foundations of Catholicism in Allen County. He ministered to the French settlers of Besancon, a parish that still holds the priest in high esteem, even well after his death.

Father Benoit is known to have laid the groundwork for Catholicism in early Allen County; he is credited with building the Cathedral of the Immaculate Conception in Fort Wayne.

The settlers of Besancon held Father Benoit in the utmost esteem. In fact, according to a record from the 1940s, when the area above the church sanctuary was painted, parishioners insisted that Father Benoit be portrayed among the angels. This request for the priest’s memorialization in the sanctuary mural became reality until it was re-frescoed. Today, Father Benoit is honored in name by stained glass above the sanctuary.

According to the Besancon Historical Society, the parish had no priests for two years starting in 1878. From 1893 to 1894, two priests served the rural parish from the Fort Wayne cathedral.

The church became a stop on the historic Lincoln Highway when the early highway was routed past the front of the property in 1913. The nearly 3,400-mile highway stretched from New York to San Francisco; it became, in New Haven, US-30, and still passes in front of the parish property. 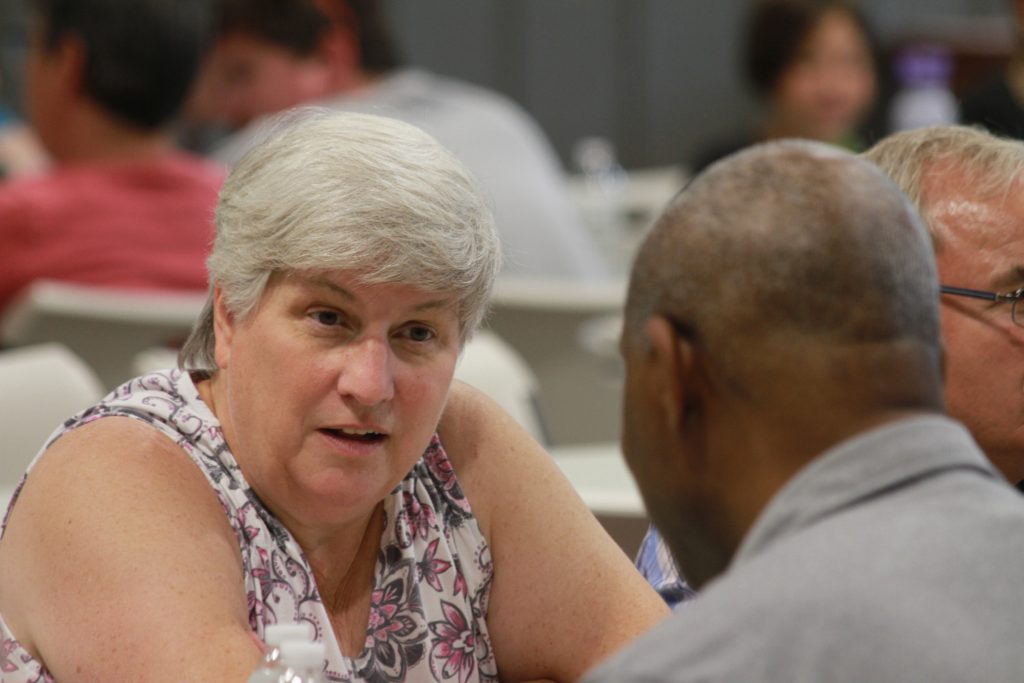 After the celebration of Mass, St. Louis, Besancon Parish pastor Father Louis Fowoyo joined parishioners for lunch in the recently rededicated Besancon Hall, which was built in 1948 — two years after the parish celebrated its centennial.

Lifelong parishioner Ellen Oberley has seen the close-knit community grow since her childhood. She expressed excitement for the future of her parish.

“There’s just so many new babies all the time, and the families are growing.” Oberley said. “Now there’s so many new families from other areas, too. When I was growing up, it was just — everybody lived right here. But the new families help our school to grow. “That’s exciting, I think, to keep growing like that.”