When St. Jude, Fort Wayne, parishioner Liz Sanders read about Deacon Mel and Annie Tardy and their roles on the Diocese of Fort Wayne-South Bend’s Black Catholic Advisory Board in a Today’s Catholic article, Sanders knew she wanted to bring the couple to speak at St. Jude Parish in Fort Wayne. Sanders saw an urgent need to open a dialogue about racism, given the contentious atmosphere in the U.S. today.

This discussion, titled “A Drink with a Samaritan Woman: What Jesus Teaches us about Racism,” came to fruition on Aug. 27.

After speaking with parish pastoral associate Mary Pohlman and pastor Msgr. Robert Schulte, Sanders contacted Deacon Tardy to ask him to give a discourse on racism, to which he gladly agreed.

“We need that here; we couldn’t wait. It’s imminently necessary that we address this issue publicly from the Church,” Sanders said. 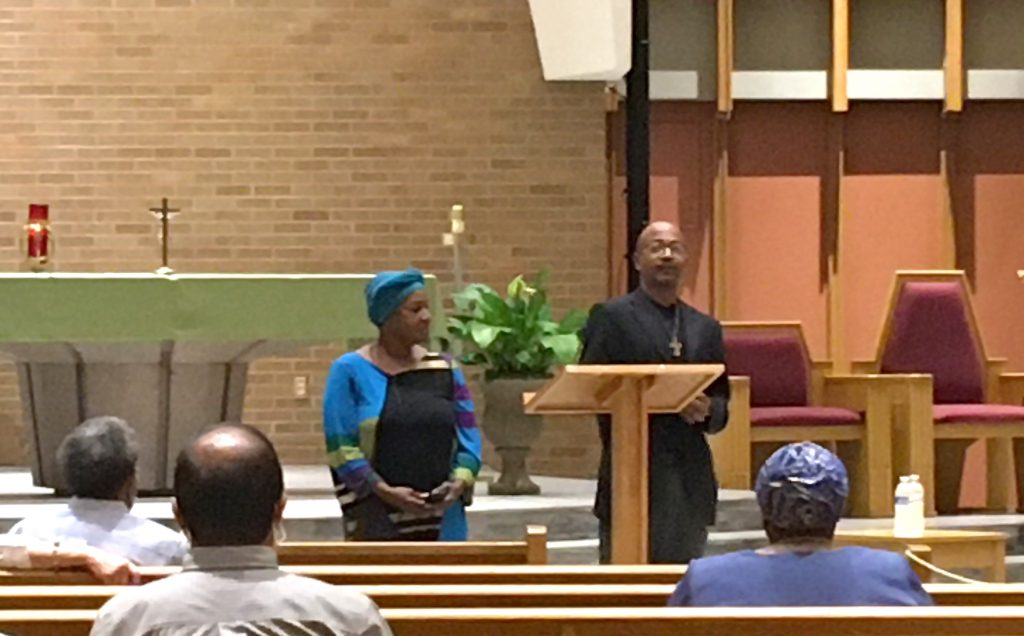 Jennifer Barton
Prayer and the studying the example of Jesus are ways to help a person embrace the Catholic perspective on the sin of racism, said Deacon Mel and Annie Tardy at St. Jude, Fort Wayne, Aug. 27. The two spoke during a forum organized by the parish because of recent national and local events.

Sanders is very active at St. Jude on the Adult Faith Formation Committee and the Social Action Committee, so issues involving human dignity are dear to her heart.

The focus of the talk centered around the story of Jesus meeting the Samaritan woman at Jacob’s Well in Samaria, an area of the Holy Land that traditional Jewish people of the time avoided. Deacon Tardy related that Jesus intentionally went to the well to meet a woman marginalized by Jewish leaders of the day for her gender, ethnicity and multitude of sins. He went because, as Deacon Tardy stated, “Samaritan lives matter.”

He clarified that such a statement does not mean that other lives do not matter, but that the Samaritan woman, in particular, mattered to Jesus. “It is a remarkable story about the love of Christ, the love of God for each and every one of us. … Jesus had something in mind; He knew she was going to be there.”

Deacon Tardy and Annie shared heart-wrenching experiences of racism in their personal lives as Black people in America. Annie spoke of their 10-year-old grandson, who is tall enough to be mistaken for a young man and her fears for what may happen to him someday. Their greatest concerns are for the youths who are growing up under a system of racial prejudice. They hope that the young men who come to their home parish of St. Augustine in South Bend, which is racially diverse, will be treated with dignity and respect, and welcomed into the Church and the community at large.

The biggest obstacle to this, Deacon Tardy explained, is something known as systemic racism – the idea that a person can be considered “less-than” simply because of the physical differences. This is an implicit bias that he stated began in human nature as a “protective measure” against predators such as wild animals.

“It’s not necessarily a bad thing, but it can be if we allow it to color our activities and behavior towards people.” Suspicion toward others and even particular areas of the same town can stem from this, causing people to subconsciously decide that “one neighborhood is safe and another neighborhood is not – just because of the color of the folks that live there.”

He reminded listeners that the fastest-growing Catholic populations are radically different areas of the world than the U.S., such as Africa, Latin America and Asia. 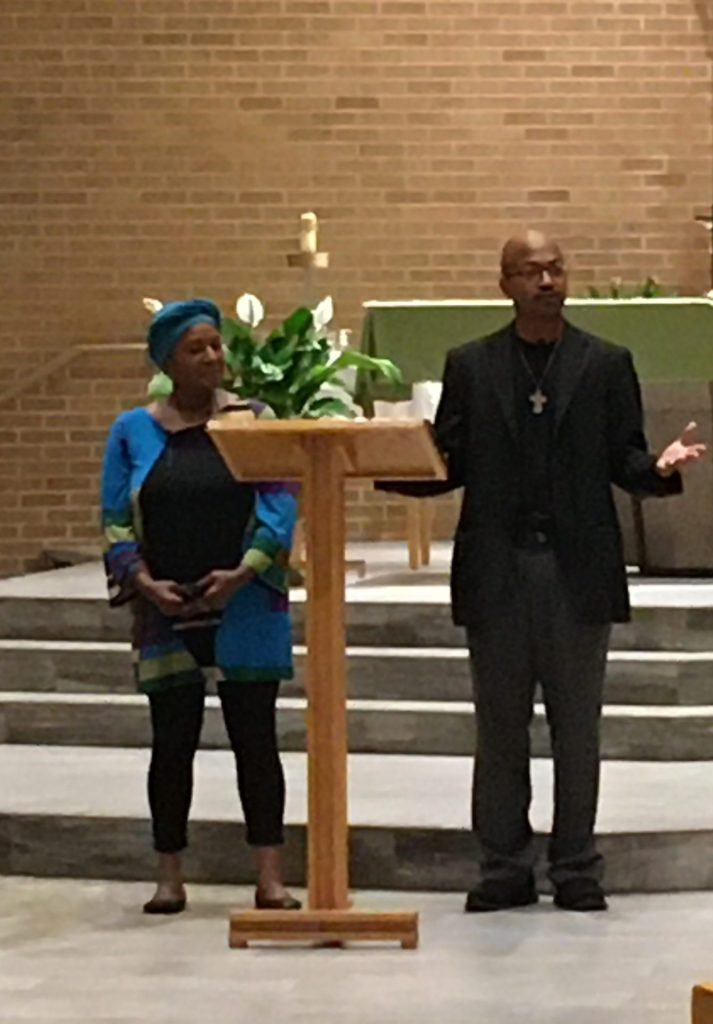 His recommendation for eradicating systematic racism is to get to know people. He reiterated that through conversation, Jesus connected with the Samaritan woman, who came to believe in Him as the Savior – “the Son of God.” Through her, other townspeople also came to believe. Similarly, Deacon Tardy hopes to accomplish greater unity in the future through dialogue.

While many people don’t want to talk about racism, Deacon Tardy said that sometimes pointing out the problem of implicit bias is the only way some people will see it. He noted that even people who live in similar places and circumstances can have vastly different life experiences.

“We need to pray that God gives us the Holy Spirit so that we have the gifts of the Holy Spirit – courage, wisdom – we have those things that we need to make a difference, to bind us together so that we can be the body of Christ. The world does not want this to happen. Christ died so that it can happen. If we ask Christ to heal this world, say ‘open my heart, Lord,’ God’s going to give us what we need to heal this world.”

Around 30-40 people from different age groups, parishes and backgrounds attended the talk, including one attendee who came from Indianapolis specifically to participate. The response was overwhelmingly positive, and several members shared their own encounters with racism and incidents in which racism was overcome because of common goals, such as in military service.

Before Deacon and Annie Tardy took the podium, Pohlman recited the U.S. Conference of Catholic Bishops’ prayer for the end of racism, titled “Wake Me Up, Lord.” Together with Sanders, she hopes to carry on the work began that evening by bringing programs such as the Just Faith eight-week series on racism to St. Jude.

“The one thing we wanted to do was look at systematic racism and see ‘How did we get here?’ Then we’ll look at what we can do. Everybody can do something,” Pohlman said.

“It’s a big issue,” Sanders added. “We need to step out of our comfort zone.”

Bishop Kevin C. Rhoades has spoken out against racism in several ways recently, including a statement on the death of George Floyd and the moral evil of racism. He will offer a prayer service for racial justice on Sept. 9, the feast of St. Peter Claver, the patron saint of interracial justice, at Bishop Luers High School, Fort Wayne. The event will be livestreamed for other Catholic high schools in the diocese and for the public at on the diocesan Facebook and YouTube pages. Watch the livestream at @diocesefwsb.