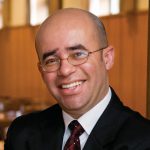 Pope Francis has invited Catholics to focus our attention this year on St. Joseph, patron of the universal Church. I commend him for this invitation.

I have always been fascinated about how much Christians have said throughout the centuries about someone for whom we have no record of having said anything. Our Catholic imagination is creative. I have been reading some books and articles about St. Joseph and have arrived at two conclusions.

On the one hand, we must not assume that the silence of the Scriptures about his words means that Joseph did not say anything. As I meditate upon the few scenes in the Bible that mention Joseph, I bet he said a lot in prayer, his interactions with his beloved Mary and their discernment about building a life together.

I am sure he had much to say when anxious to find shelter as his wife was about to give birth, when he had to flee to Egypt to protect his family and in the everyday interactions at home raising the Child Jesus.

On the other hand, most of what we know and can infer about Joseph comes from what we extrapolate from his relationships with Mary and Jesus, as well as his actions toward them.

In my own reflection about Joseph, I want to be cautious about not idealizing him to a point at which one cannot relate to him at all. There are so many reflections about Joseph, all written with the best intentions, that tend to downplay his humanity. Projecting Joseph as an almost angelic being or nearly perfect human takes the inspiration away.

His relationships and actions reveal a man in love with his wife and child, ready to do anything possible to ensure their well-being. Life throws us curveballs all the time, and Joseph had to handle quite a few in the handful of scriptural passages where he appears.

I am particularly drawn to the events associated with the flight to Egypt (Mt 2:13-23). There Joseph, spouse and father, becomes an immigrant, a refugee. As an immigrant myself and as someone regularly working with immigrants in ministry, the story hits home.

In his December apostolic letter “Patris Corde” (“With a Father’s Heart”), Pope Francis wisely brings our attention to this moment in the life of Joseph as he risks everything in order to protect what he loves most, his family:

“The Holy Family had to face concrete problems like every other family, like so many of our migrant brothers and sisters who, today too, risk their lives to escape misfortune and hunger. In this regard, I consider St. Joseph the special patron of all those forced to leave their native lands because of war, hatred, persecution and poverty” (No. 5).

Contemplating the lives of many immigrant men who are part of my life, fathers and husbands, I grow in my appreciation of St. Joseph and what he could have said.

He must have said goodbye to friends and relatives. He must have worried how he was going to support his family. He most likely learned a few words to get by in the language of the new land. He surely must have lost sleep thinking about the safety of his family in a society that treated them as foreigners.

As an immigrant, I am sure that Joseph prayed aloud and in silence. He must have cried while expressing his frustrations. I can imagine having to explain himself to others many times; bless and curse; defend and justify. How do I know this? Because I have. I have also seen many immigrant fathers and husbands do likewise.

Hosffman Ospino is professor of theology and religious education at Boston College.