St. John the Evangelist principal Mattie Willerton noted that the students prepared a spiritual bouquet for the bishop in honor of his visit.

Willerton, who has been the school’s principal for about six years, said: “I think what is most amazing is to think about (the last) 150 years and the ability to provide Catholic education to all the children who’ve walked through those doors — and the impact that has had. Not just for one generation or two, but generation after generation sharing the faith.”

Willerton said that in some cases, there are now great-grandchildren of parishioners attending the school. Also, several alumni have come back to work in the school that they attended. Among those alumni who are now on staff are Ruth Newell, third-grade teacher; Joscilyn Acosta, fifth-grade teacher; Angie Hein, librarian; Maria Weaver, resource teacher; Monica Detwiler, classroom aide; and Alicia Hoover, preschool aide. Stephanie Kronk, first-grade teacher, is not an alumna of the school but has attended the parish since she was a child.

“We have a pretty amazing staff,” Willerton said, adding that it gives her hope that the school will continue to provide quality Catholic education for another 150 years. 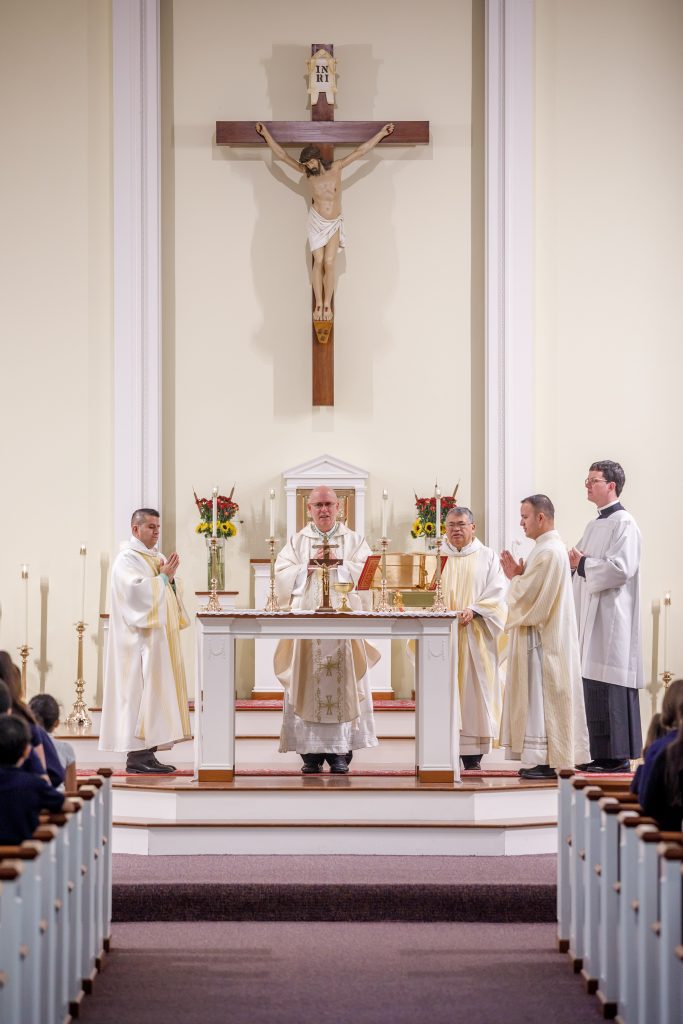 Hein attended St. John along with her siblings, including Detwiler. Both women’s children also attended the school. “I feel proud of our little school,” said Hein. “We carry on the traditions from our ancestors, but also have new ideas. Our school is like a second family, and it’s a great place to be.”

History of the school

According to the history of St. John the Evangelist Parish compiled for its 175th anniversary, in 1868, when Father Duehmig supplied spiritual care to the parish from Avilla, he also opened a school in the church building by placing boards over the pews to create desks. His brother was the teacher.

Father H. Meissner came later that year and built the first school building for $500. The children were taught by lay teachers until 1881.

In 1881, Father A.J. Kroeger built the second school, a one-story brick building, at the cost of $1,100. It had two 30’ x 46’ classrooms. Both schools were located on the corner of Third and Monroe streets. The Sisters of Holy Cross came that year, and directed and taught all eight grades for an annual salary of $450 each. There were 57 children and the boys were in one class, the girls in another. The average annual school expense was $8 per student, or about 50 cents per month.

In 1907, there were 90 families in the parish, 362 souls and 73 students enrolled in the school. In 1916, the Holy Cross sisters left, and were replaced by the Sisters of St. Frances of Lafayette, Indiana.

In 1924, the third school building was erected on the site of the former buildings, which were razed. The school was closed for a time from 1934-49 because of the Great Depression. 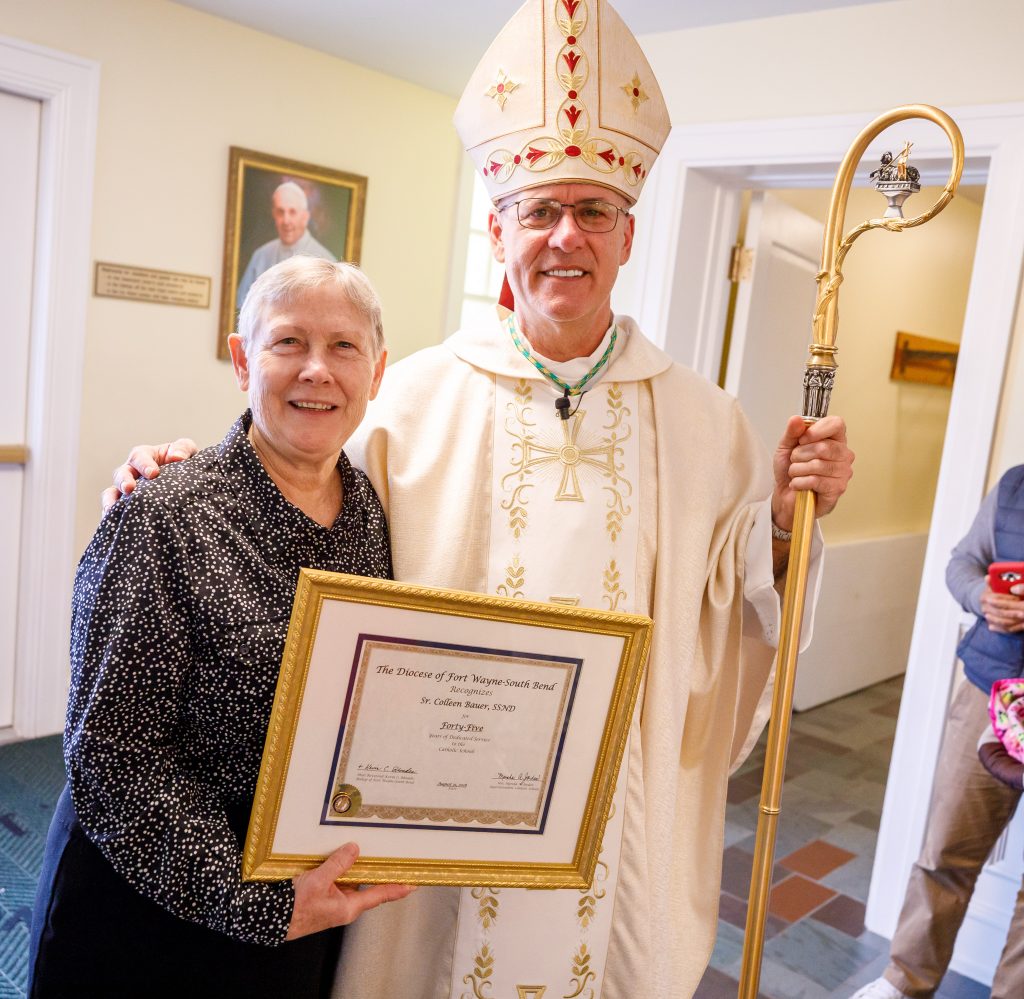 Sister Colleen Bauer, SSND, a second-grade teacher at St. John the Evangelist School, was presented with an award for her 45 years of service as a Catholic schoolteacher during the Mass.

In 1940, the Our Lady of Victory Missionary Sisters came and took charge of religious instruction. In 1949, Father Herman Miller was instrumental in getting the school reopened, and quite by accident obtained the assistance of the School Sisters of Notre Dame from Milwaukee, Wisconsin, who were supposed to arrive to a different Father Miller, in Fort Wayne. By the time the error was discovered, it was decided to leave the sisters in Goshen to serve.

In 1962, the school became a charter member of the Airborne Educational Program for Science and Foreign Languages Institute, which taught over a special TV channel. Two TV sets were purchased, and a year later the parent-teacher organization donated two more so each class could have its own.

In 1964, a new school with addition and a basement was built. A mailing was sent to parishioners that said if each contributed $2 a week in addition their regular contribution, the new school could be built. They gathered pledges and Bishop Leo Pursley gave his blessing, as well as a $145,500 loan. At the same time, another house and garage were razed for parking and a playground.

From the time the school reopened in 1949 until 1981, it was a tuition-free school. At the time of the parish’s sesquicentennial there were 150 students in the school.

In 1996, St. John had a sixth grade and a combined seventh/eighth grade. The last year for the upper grades was the 1998-99 school year.

The year 1999 also brought a dress code to St. John, as well as a school mentor program started by the late Mary Thul and peewee and junior preschool programs. Additional school renovations and parish center construction were a part of the Project Faith 2000 fundraising campaign. That renovation added three classrooms downstairs, a multipurpose room, kitchenette and storage room, school and parish offices, an upstairs library and computer lab, teacher’s workroom and lounge and a commercial kitchen. The parish center was later dedicated to Deacon Art Bleau, who served the parish for many years prior to his passing. 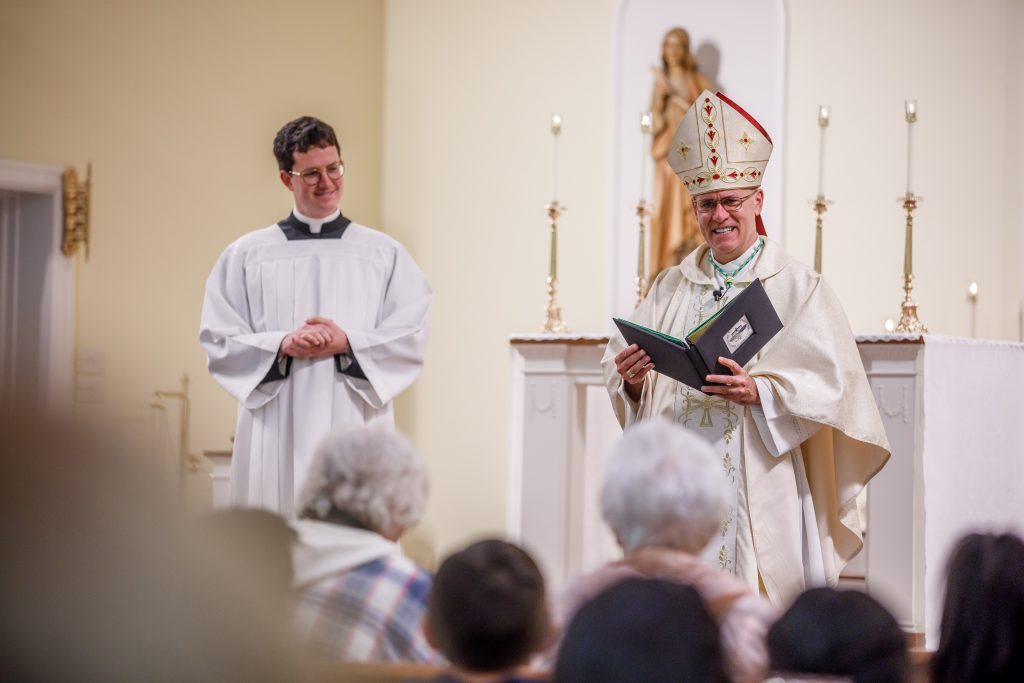 The students prepared a book of prayers for Bishop Rhoades, which was presented to him at the end of Mass.

“We are excited to be celebrating 150 years of Catholic education here at St. John the Evangelist in Goshen,” said pastor Father Royce Gregerson. “Shortly after the founding of our parish, one of the first missions we undertook was to educate the young people of our parish in a rich Catholic environment. That mission continues today.”

“I am so thankful for the teachers, administrators, religious sisters, parents and dedicated parishioners who have made our school so successful,” he added. “One hundred and fifty years later, we are still providing a quality education and making young Catholic disciples.”

A special family picnic to celebrate the 150th anniversary of the school is planned for the spring.