Michael and Amber Mascola admit they have not always practiced the Catholic faith, but over the past few months — since joining St. John the Evangelist Parish in Goshen — they’ve embraced it and gained sacramental graces for their family.

Amber joined the Church in a delayed-by-COVID-19 Mass with the sacraments of initiation June 12 — just days before the couple also entered into the sacrament of marriage. Their two youngest girls were baptized May 2.

Amber grew up in Pittsburgh, Pennsylvania, with a Lutheran mother and a Catholic father. She was raised Lutheran. The family moved to the Goshen area in 1999 but didn’t begin attending church. She said she sometimes went to Mass with a Catholic friend, and when in high school she and her brother sometimes attended a Mennonite church and participated in the youth choir.

Michael grew up in Elkhart, at St. Vincent de Paul Parish. He was baptized and received his first Eucharist and his confirmation there. He was an altar boy, and said he was “extremely active” in the church as a member of the choir and youth group. He recalled attending a Heart Work Camp with the youth group at St. John one year.

He said he was close to the parish priest at the time, and it was difficult for Michael when the priest was transferred to Fort Wayne. In his late teens he said he got “extremely rebellious” and fell away from the Church.

The couple met online, as they had a mutual friend. “We met in 2006 on Myspace,” Amber detailed, and explained that Michael had showed compassion and encouragement to the friend, who was going through a hard time. She thought, “He sounds so sweet.”

They talked online for while and then met in person. Amber was still in high school. They dated for a year but broke up at the end of her senior year. After another year they got back together. 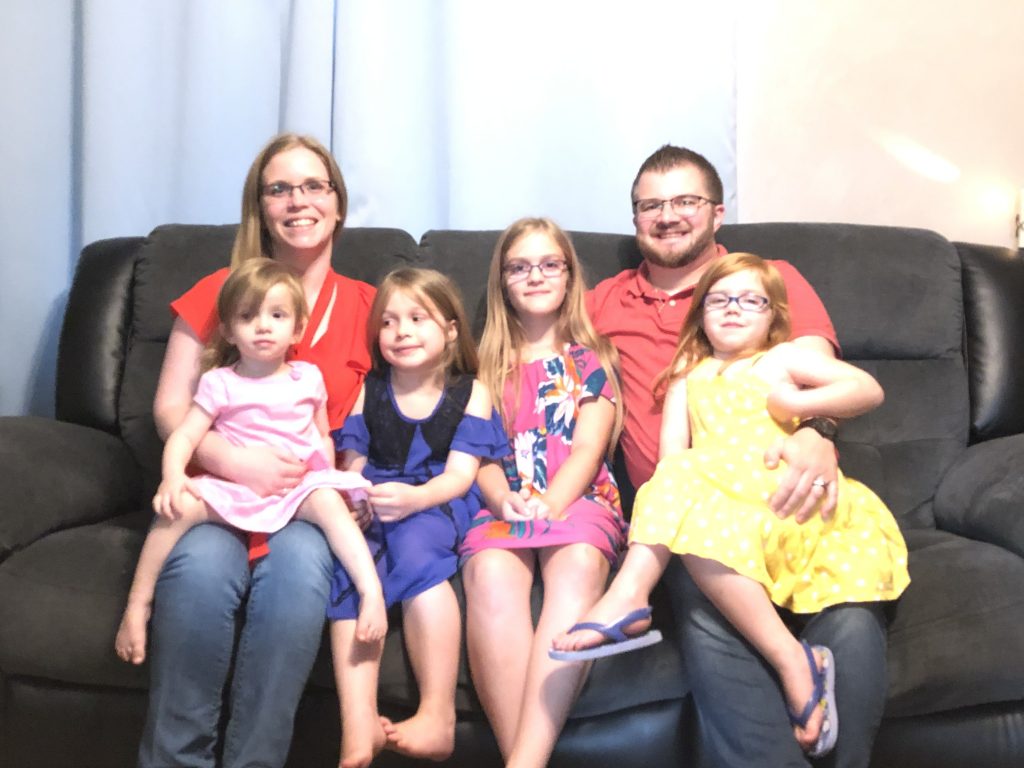 Denise Fedorow
Members of the Mascola family are excited about the sacraments they’ve received or will soon receive as members of St. John the Evangelist Parish in Goshen.
From left are Amber Mascola, holding 2-year-old Brynlee; 7-year-old Natalie; 10-year-old Alyssa; and Michael, holding 5-year-old Julianna.

They moved in together right before their first daughter, Alyssa, was born on Oct. 3, 2009. Alyssa was followed by Natalie in September 2012, Julianna in April 2015 and Brynlee in July 2018.

Amber said Michael pushed to have the girls baptized Catholic. But, she said, “We didn’t want to baptize them and then never go to that church again.” During their first few years together they both also worked in retail, which meant working Sundays — so they only attended church sporadically.

“I didn’t realize until recently that there were options other than Sunday to attend Mass — like every day,” Amber said. 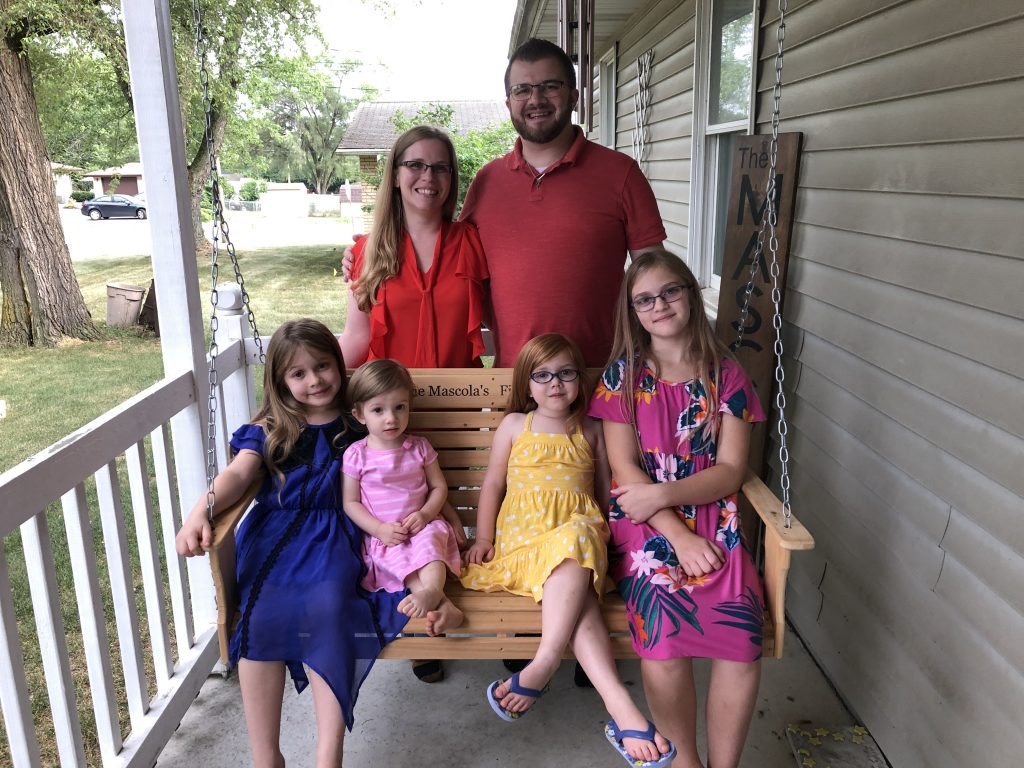 Denise Fedorow
The Mascola family of St. John the Evangelist Parish in Goshen gather around the front porch swing engraved with their wedding date. Standing are Amber and Michael Mascola. Seated from left are Natalie, Brynlee, Julianna and Alyssa.

A couple of years ago the Mascolas decided they needed to find a church to call home. Their job situations changed too, giving them Sundays off. They began to attend Mass occasionally at St. Matthew Cathedral in South Bend with friends, but with the four girls it wasn’t feasible to make the long drive each week. Then Michael’s cousin told them they’d just started attending St. John the Evangelist and invited them to come.

They visited St. John on a Sunday in November. “We’ve been going ever since. Everyone’s so friendly, and that first time we went we got a gift afterwards. I’ve never seen that before. That immediately made me feel welcome.”

Amber joined the preparation class for the Rite of Christian Initiation of Adults in December or January, so she was a couple of months behind, but because of video lessons was able to catch up. She said most of the earlier classes were about topics she was familiar with, having been brought up Lutheran. She said she thinks coming into the program when she did was providential.

“I think I was meant to join RCIA when I did because the first or second class answered my big question about Catholicism — the Eucharist and why we believe it’s actually Christ’s Body and Blood. I thought this was what I was meant to be here for,” she said.

Amber was raised to believe the bread and wine were just symbols so the concept that they could be transformed was initially confusing for her. The RCIA class was informative, though, and cleared things up for her. She said the Church’s teaching on Mary was “never a question for me,” though.

If not for the pandemic, Amber would have joined the Church at the Easter Vigil. Instead, she received the sacraments on June 12 — eight days before the couple’s wedding. 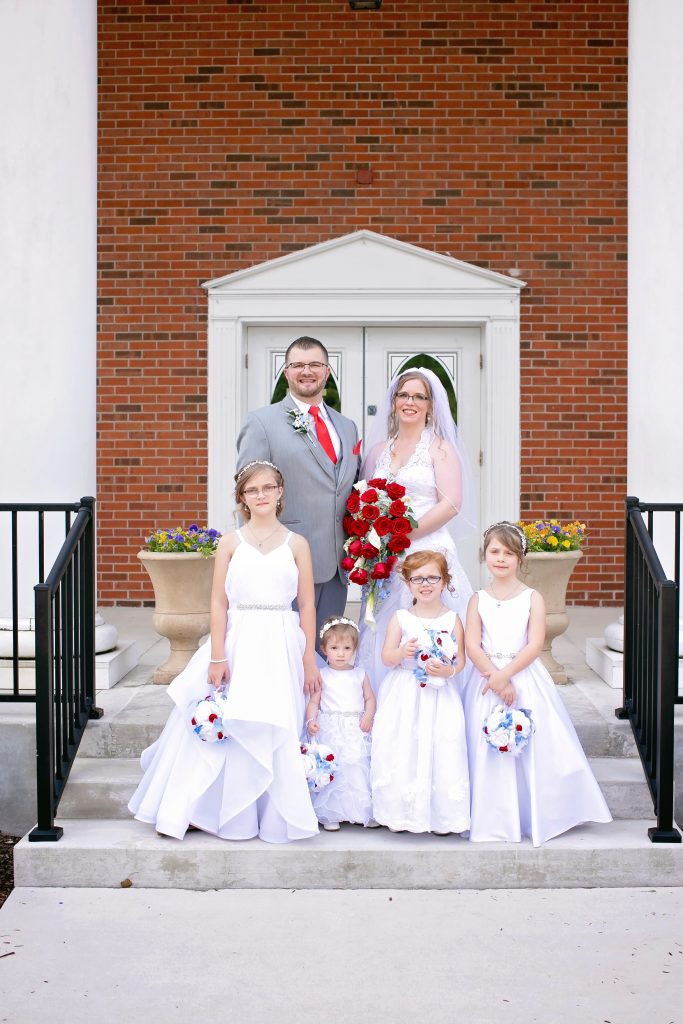 Provided by Amber Mascola
Michael and Amber Mascola stand on the front steps of St. John the Evangelist Church in Goshen on their wedding day June 20. Amber and their daughters are in the process of all receiving the sacraments of initiation into the Catholic faith. In front, from left are Alyssa, Brynlee, Julianna and Natalie.

Michael said, “I’m proud of Amber taking the horns and getting ready for her first Communion and confirmation. It was a blessing it happened right before the wedding.”

When asked how being fully initiated into the Church has made a difference for her, Amber said, “I think the whole time after I started RCIA I wanted to receive Communion. … I feel like I’m more connected to the Mass and the whole reason for being there,” she said.

Their two youngest girls were baptized in a private ceremony on May 2 that was livestreamed for other family members. Now the two oldest are asking for baptism as well.

All three of the oldest girls are signed up for religious education. After two years Alyssa and Natalie will be baptized and receive their first reconciliation, first holy Communion and confirmation.

When Alyssa was asked how she felt about preparing for the sacraments she replied, “I’m excited and happy about being able to be a friend of God.”

Julianna was asked how she felt about her baptism and she said, “A little bit nervous and a lot of happy.”

The suspension of public Masses due to COVID-19 affected the family spiritually, Michael said, “During COVID I was getting down; I need Mass, I just didn’t feel right. I felt empty.” Now they’re back but splitting their Mass attendance because they’re not comfortable bringing their toddler. One of them attends the 7:30 a.m. Mass and the other attends at 11 a.m. Michael is part of the men’s group, which has been meeting virtually during the shutdown.

“We’re still trying to find our way and how to help out more,” he said. “We’re really happy with St. John’s. We feel it’s a family. We like Father Royce (Gregerson) and Father José (Arroyo Acevedo) and everyone we’ve met has been friendly. We love it!” I just can’t wait till the day we can all go to Mass together as a married family,” he said.