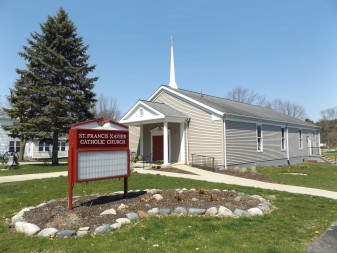 PIERCETON — Tucked onto a quiet residential street in Pierceton in the eastern part of Kosciusko County is St. Francis Xavier Church. Because the church has been there longer than the town of Pierceton itself; the street it is on is named Catholic Street.

The church was established 152 years ago on Aug. 16, 1864; the town of Pierceton will be celebrating its 150th anniversary this year.

St. Francis was a mission church, served by priests from Largo, LaPorte, Columbia City and Arcola until 1946 or 1950, according to different accounts. There were 13 families at the time the church was established. According to historical accounts, in 1866 additional land was purchased for $75 and in 1874 — 10 years after the church was established, land was purchased for a cemetery at a cost of $40.

Father Robert Hoevel was the first resident priest and in 1953 a house was purchased at the corner of Catholic and Fourth streets for a rectory. A parish hall was then built attached to the rectory and reportedly became the center of parish activities.

When Rev. Eugene Zimmerman was pastor of both St. Martin de Porres in Syracuse and St. Francis in the late 1960’s, he sold the rectory. In 1972, thanks to a generous donation left as a legacy from a parishioner, a new church was built and is still in use today. The church was dedicated on April 16, 1972 by Bishop Joseph Crowley. A warm feeling envelopes one upon entering the cozy church. 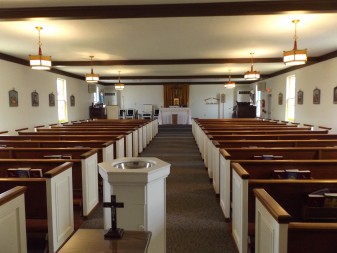 Two years ago, Rev. Charles “Chuck” Herman was assigned to St. Francis Xavier and he’s the first resident priest in nearly 50 years. A new rectory was built about a year ago seven blocks away where Father Herman resides with his German shepherd companion.  Apparently parishioners campaigned to have a fulltime priest again to offer daily Masses instead of just on weekends. The parish now has 160 families.

“I’m basically a staff of one,” Father Herman said. He has someone who comes in weekly for about four hours to do bookkeeping.

This is quite a change for the priest who has served at larger parishes, most recently Holy Family in South Bend. He said what struck him as special about the parish is the closeness of the parishioners,

“Something that amazes me is I’ve never been in a parish where people stay and talk (after Mass) like they do here. Parishioners will tell you that, too, and that’s what attracts them to the parish,” he said.

“Everyone is extremely friendly, they give a lot to the parish and work hard,” he said. “For a small parish there’s a lot of enthusiasm and a lot of good people.”

Ministries at St. Francis include a Knights of Columbus round table group and a group that plans activities.

“Each month we like to have activities to get people together (for example) two weeks ago we had a brunch on Divine Mercy Sunday and it was very well attended,” he said.

A Daddy/Daughter Dance is upcoming, sponsored by the Knights of Columbus. They also hold an annual Oktoberfest at the end of September and participate in the Pierceton Community Days Parade.

Parishioners also host a free community dinner every other month and an Irish Festival on St. Patrick’s Day.

“They definitely like to pray, play and work together,” Father Herman said of his congregation.

Father Herman said they also get a lot of lake people in the summers.

Father Herman said they are about to start an expansion project and are just waiting for plans from the architect. They are adding space to the front of the church for the Sacristy and storage, and the second phase will be a gathering space to the church, which will also enable them to properly host viewings prior to funerals.

Mass times are Saturdays at 4 p.m., Sundays at 9 a.m. and from Memorial Day through Labor Day Mass is celebrated at Jellystone Park at 7:30 a.m.
Confessions are Saturdays from 3-3:45 p.m.
A monthly Holy Hour is held on the second Wednesday of each month.