The reactions of members of St. Charles Borromeo Parish in Fort Wayne varied from awe to wonder as they walked into the bright, fresh space of their newly renovated church on May 31, the day Bishop Kevin C. Rhoades came for Mass and to bless the space. Audible gasps and exclamations of delight about the church’s beauty spread through the crowd. Many people stopped to take everything in or snap photos before Mass began. One woman remarked how she could feel the presence of the Holy Spirit immediately upon entering.

See more photos from the Mass.

Father Tom Shoemaker, Pastor of St. Charles Borromeo, spoke of the renovations and the steps to “Welcoming the Tabernacle,” as he titled the project. He said, “Ever since I’ve arrived, the tabernacle was not in the church, so that was the driving force behind everything.”

Those unfamiliar with the church before the remodeling might not have even realized that there was a tabernacle, as it previously rested in a chapel behind the altar, unfortunately hidden behind oak slats. In addition to bringing the tabernacle inside the sanctuary, Father Shoemaker desired to beautify the church and make needed repairs to the leaking roof and other areas. There had been talk of such a project for four of the five years he has been pastor, with construction beginning immediately after Christmas and lasting five months. Architect Bill Heyer from Columbus, Ohio, and a renovation committee from the parish collaborated on the project. Father Shoemaker was pleased to report that the work was completed on time. 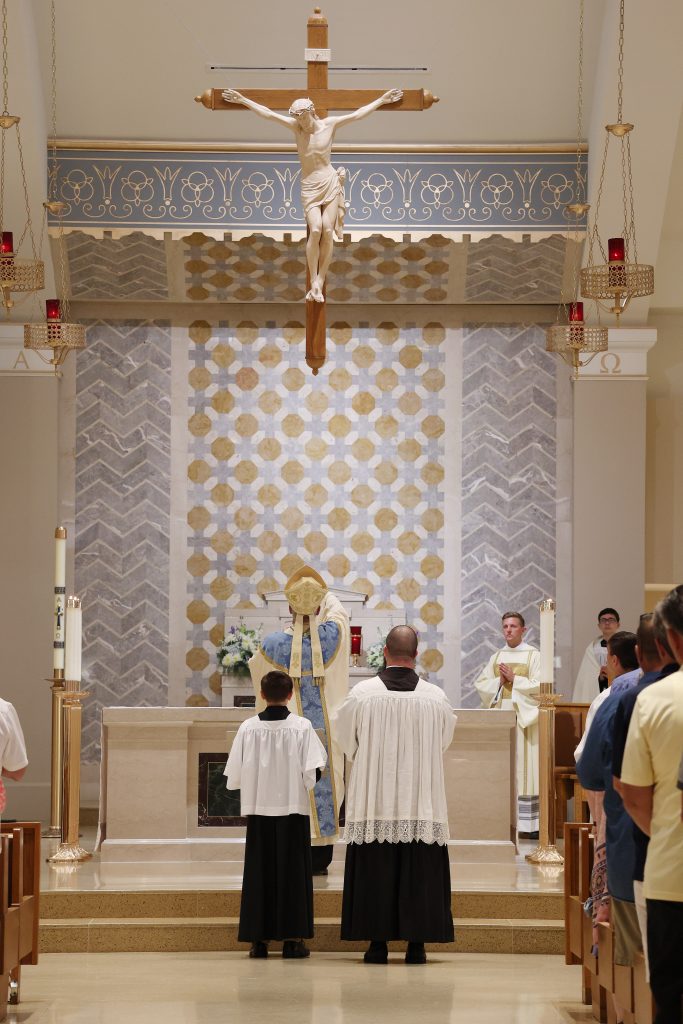 Photos by Jennifer Barton
On May 31, Bishop Kevin C. Rhoades visited St. Charles Borromeo Parish in Fort Wayne to bless their newly renovated church interior. Father Tom Shoemaker, Pastor, was pleased to welcome the tabernacle back into the sanctuary, as well as the parishioners who helped accomplish the renovations.

Parishioners of St. Charles Borromeo embraced the project, helping finance it and giving of their time and talents to truly make the church their own. The cross upon which the corpus rests, as well as the Presider’s chair, were crafted by parishioners out of repurposed oak boards from the church. Volunteers removed upholstery, sewed altar clothes and helped set up and tear down for Mass in the gymnasium – where Mass had been held during construction – five days a week. Knights of Columbus Council 451 members ushered at the bishop’s Mass and aided with the ice cream social afterwards.

Others connected with the church differently. Dennis Ellis, a longtime parishioner, was stunned when he stepped foot inside the church. One aspect that stood out to him was the crucifix. Though the cross was created locally, the corpus came from Oberammergau, Germany. His wife, who taught CCD at the parish before her passing, came from a town in Bavaria, about 200 miles south of Oberammergau. “The fact that my wife used to talk about this area … that’s where the Passion Play was put on,” Ellis commented.

Ellis was delighted by the improvements. He said, “It’s interesting to come into something so the same, but so changed. It’s the same walls around and within the walls, you look at this up there, it’s so bright. You look at how the windows look … they were there before, but they’re more noticeable to me, I think. I’m happy it happened in my lifetime.” 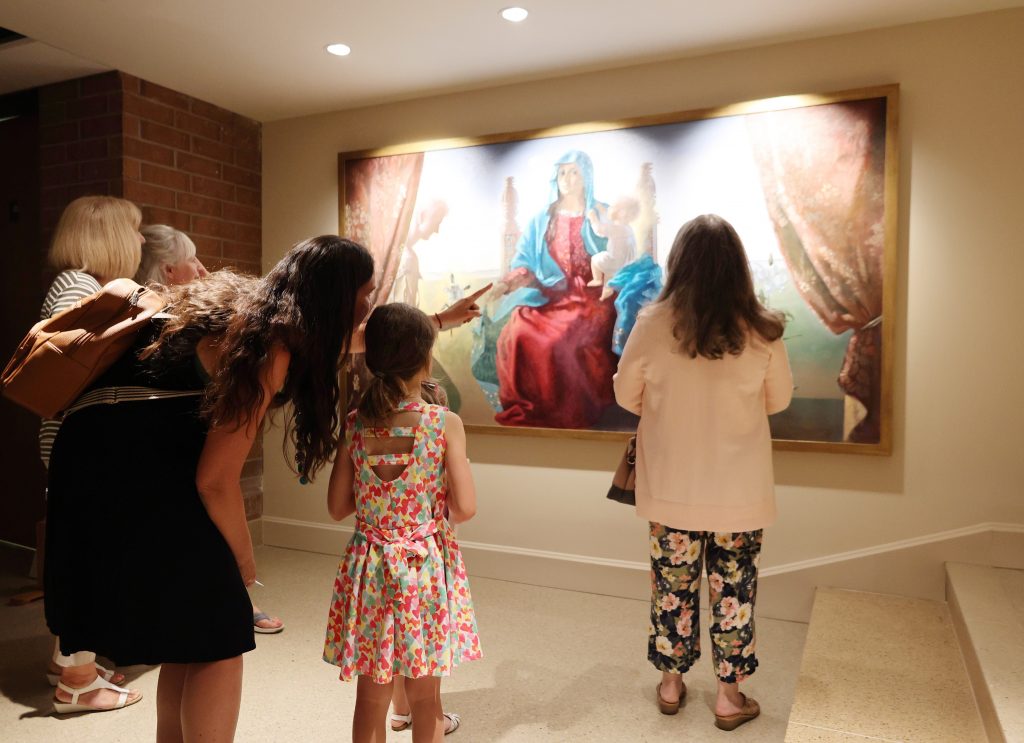 Danielle Meyer, a parishioner at St. Charles Borromeo, shows her daughter the new painting of the Virgin Mary after the Mass of blessing.

Bishop Rhoades began Mass by welcoming parishioners “back to your church in the beautifully renovated sanctuary.” He spoke of his gratitude to be present, particularly on the Feast of the Visitation of the Blessed Virgin Mary. Then he blessed several new items in the church: the Presider’s chair; the ambo; the paintings of St. Charles Borromeo and the Blessed Mother that flank the altar, as well as the angels in the dome above it; and the cross.

More important than the décor, however, were the words spoken in his homily: “Here in this church, the Lord is now among us in the tabernacle with His Holy Eucharistic presence.”

He then compared the Old Testament tabernacle where the Ark of Covenant dwelt among the Israelites to the new Ark – Mary. “God fashioned a holy tabernacle, a holy temple for His Son in the virginal womb of Mary. She was truly a holy temple, conceived without sin and sinless her entire life. Within her body and within her soul, God dwelled. When she visited her cousin Elizabeth, she carried with her the Son of God in her womb.” This, he said, Pope Benedict XVI called the first Eucharistic procession.

“This renovated sanctuary which I have blessed is beautiful. The sanctuary should be the most beautiful part of the church. Literally, the word ‘sanctuary’ means ‘holy place.’ This is the holiest place in the church because here is located the altar of Christ’s sacrifice, a sign of Christ and the focus of the sacred liturgy. On the altar, the Lord comes to dwell with us – the bread and wine offered on this altar are transformed by the power of the Holy Spirit into the true Body and Blood of Christ. The altar is holy and should be beautiful.”

He commended parishioners on beautifying the spaces surrounding the tabernacle – the decorated valance above and carved Italian marble used for the altar, ambo and tabernacle – an area more sacred even than the Holy of Holies in the Temple of Jerusalem, Bishop Rhoades stated. 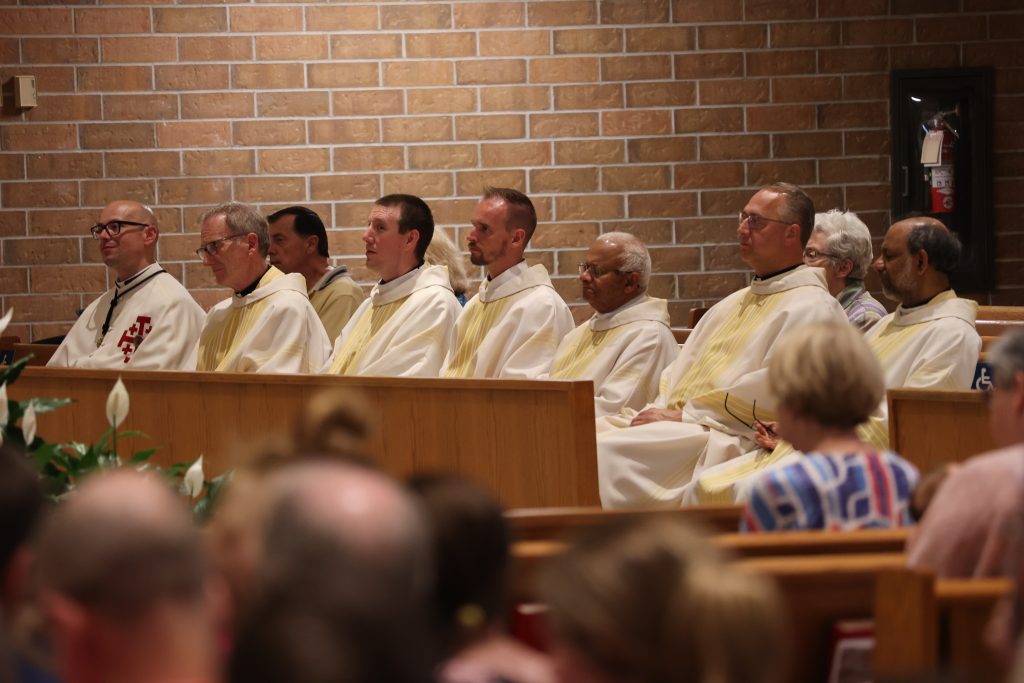 Bishop Rhoades and the parish’s priests were not the only ones in attendance. Some priests who had previously served there – Fathers Tony Steinacker, Thomas Zehr and Jacob Meyer – and sons of the parish – Father Nathan Maskall and Deacon Jacob Schneider – aided the bishop in the celebration of the Mass. Father Polycarp Fernando also visited from nearby St. Vincent de Paul Parish.

After the Mass, dozens of people wandered around the church, admiring the new paintings and taking photographs before the altar. Melissa Bullerman and her husband both teach middle school at St. Charles Borromeo. She brought her sons to the Mass where her youngest remained mesmerized by the crucifix and the painted angels circling it. “He really likes that the angels protect Jesus,” she said.

As a teacher, Bullerman handled the months of school Masses in the gymnasium with grace, but said, “it was totally worth it, completely worth it. It’s turned out so nice.”

She described her initial reaction, stating: “It didn’t feel like I was in Fort Wayne anymore; you just kind of felt like you were taken somewhere else.”

More than the artistry of the church, she was happy to see the united parish community. “It was really neat seeing everyone come together today for us, for the parish — all the fathers and Bishop Rhoades here, that was neat. It made it even more special than it already was.”