The week leading up to June 3, Catholic faithful from dioceses in Uganda and surrounding countries begin long journeys to the shrine of the martyrs St. Charles Lwanga and his 22 male companions. Walking miles in muddy roads through summer rain and cool evening weather, the pilgrims prepare themselves to celebrate the witness of the martyrs, who willingly died for their faith, their love of God and His commandments. 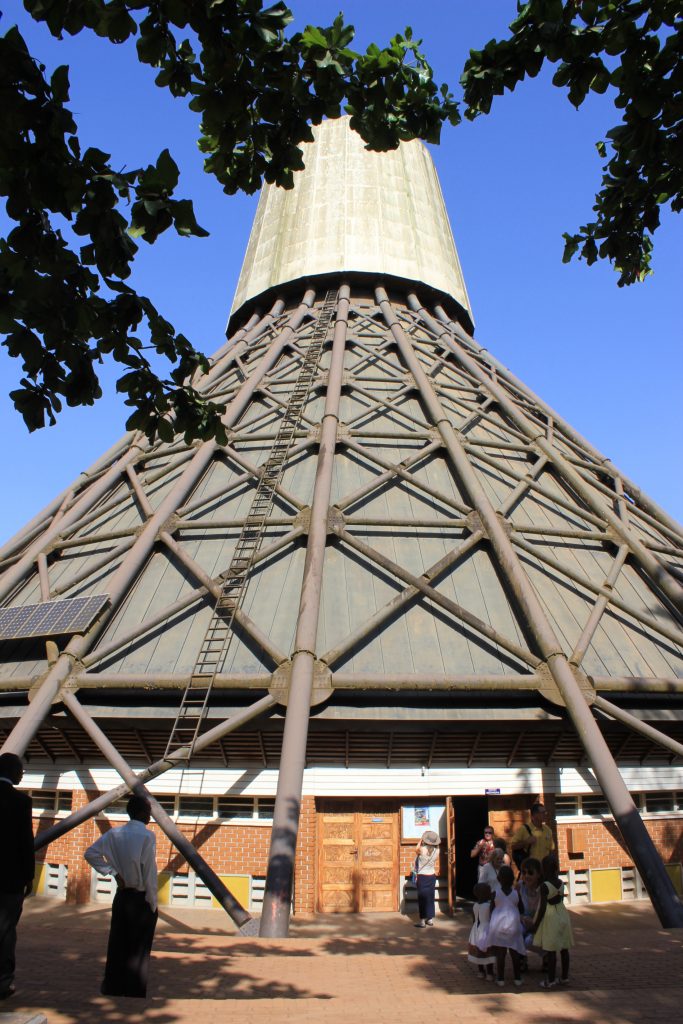 The martyrs’ shrine, a minor basilica, is built on top of the site of their death in Namugungo, Uganda. It is built in the traditional style of a hut and the wooden doors are carved to tell the story of the 22 martyrs who gave their life for the faith. — Provided by Jessica Keating

Charles Lwanga was a 21-year-old page in the royal court of the king of Buganda, in the southern part of modern-day Uganda. Christianity had recently been brought to the area, in 1879, by the Society of Missionaries of Africa, or “White Fathers” — a congregation of priests founded by Cardinal Lavigerie. King Mutesa welcomed the missionaries and before long, a number converted and were baptized, most prominently some of the young pages and men in his court.

After Mutesa’s death, his son, King Mwanga II, a corrupt man, succeeded him. At first he allowed Christianity, but was surprised to see how even the young pages followed the moral teachings of the Church — which conflicted with and contradicted Mwanga’s pedophilic vice.

Also wary of foreigners, Mwanga then had a visiting Anglican bishop, James Hannington and his caravan, murdered. Joseph Mukasa Balikudembe, the head of the male pages and a Catholic who had often protected the boys from Mwanga, reproached the king, denounced his actions and was beheaded on Nov. 15, 1885. That night, Lwanga and some of the other royal servants chose to receive a Catholic baptism. 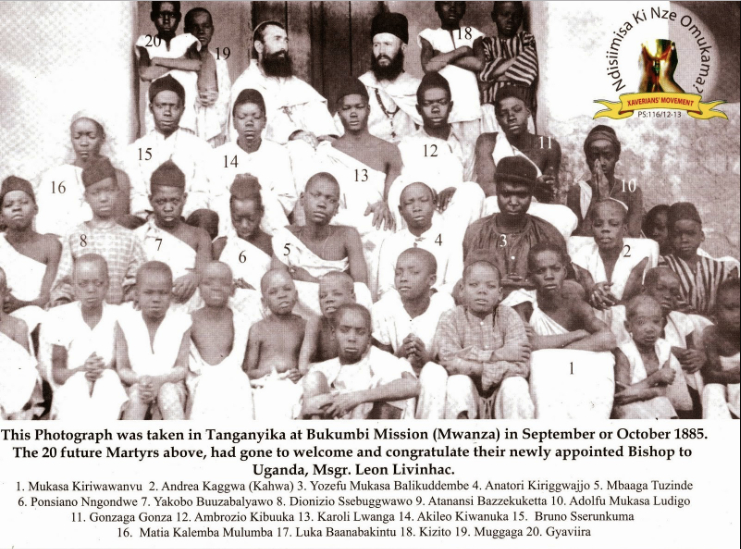 Lwanga became the head page. Sensing the climate of the courts he secretly had four of the pages baptized, including young St. Kizito, whom he had repeatedly saved from advances of the king.

In May 1886, King Mwanga discovered the boys had been receiving Catholic instruction from St. Denis Ssebuggwawo. The king sent for him and thrust a spear into his throat on the spot. The next morning, Mwanga rounded up all of the male pages, and asked the Christian converts to separate themselves from the others. He asked them to recant, and also asked how long they would remain Christian. They replied, “Till death!”

The boys’ death march went past the house of the White Fathers. Along the way, an older boy, St. Mattias Kalemba, shouted words of encouragement to the younger pages. He was executed alongside the road.

On June 3, 1886, a funeral pyre was built. Lwanga was separated from the group and again asked to recant. He refused, and his feet were burned. Charred and still alive, he was again offered a chance to save his life and forsake Jesus. Lwanga again refused saying, saying, “You are burning me, but it is as if you are pouring water over my body.” He was burned alive, and witnesses heard him say as the flames reached his heart, “Katonda!” or “My God!” The other boys also were burned together, save one, who was bludgeoned first. 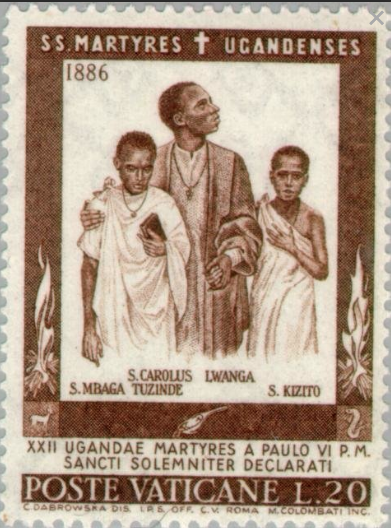 Even before their canonization, June 3 was a national holiday in Uganda, remembering and celebrating St. Charles Lwanga and the 22 men. Regardless of the day of the week it falls on, a Monday or Tuesday, the faithful worship at Mass and afterward gather at home to enjoy a feast. Mission talks are given daily for a week at local parishes around Kampala, the capital of Uganda, leading up to the feast day.

St. Mattias Murumba, St. Andrew Kagwa, St. Charles Lwanga and 19 others of the young royal servants were beatified in 1920 and canonized in 1964 by Pope Paul VI. Father Henry Byekwaso of the Diocese of Kampala, Uganda, is a chaplain at St. Joseph Regional Medical Center, South Bend. He was a young boy and altar server when the martyrs were canonized.

“In 1967, Archbishop Emmanuel Nsubuga said he would invite the Holy Father to come to Uganda and everyone laughed. But he did! And the Holy Father really came!” Father Byekwaso recalled.

He explained that all of the 22 martyrs, not just St. Charles Lwanga, are remembered well. Names such as Kizito and Mattias are popular for babies, as well as parishes across the country.

Reflecting on the primary importance of the Ugandan martyrs, Father Byekwaso shared: “The admiration for their courage, to be so convicted to their faith — we are grateful for their example. The youngest martyr, Kizito, was a boy only 12 or 13 years old. Charles Lwanga was older and a born leader who encouraged others to be vigilant.”

“Stay strong in the faith. The things of this world are passing away; stay strong as the martyrs did. Christ is the one who stays and lasts forever,” said Father Byekwaso of what the faithful can learn from the martyrs’ example.

“The Church is now on our shoulders, to carry on as the martyrs did. Coming up is the feast day of the Ascension. We are also called to be witnesses, like the apostles. We are given the same mission! ‘Martyr,’ which means, ‘witness’ — all of us can learn from them. We are all invited to lay down our lives to be martyrs, through the sacrifice we make daily for the sake of the Gospel.”

Even though Uganda is far from the U.S., Father Byekwaso reflected: “The Church is universal. It is not only in Uganda. Every saint is an expression of Christ to each one of us and we can profit from their witness.”

St. Pope Paul VI said during the homily of the canonization of the martyrs of Uganda, “The infamous crime by which these young men were put to death was so unspeakable and so expressive of the times. It shows us clearly that a new people need a moral foundation, new spiritual customs firmly planted, to be handed down to posterity. Symbolically, this crime also reveals that a simple and rough way of life — enriched by many fine human qualities yet enslaved by its own weakness and corruption — must give way to a more civilized life wherein the higher expressions of the mind and better social conditions prevail.

“These African martyrs herald the dawn of a new age. If only the mind of man might be directed not toward persecutions and religious conflicts but toward a rebirth of Christianity and civilization!”