“Whatever its size, every parish in Mexico has a Nocturnal Adoration Society,” said Alvaro Bautista, who moved to the United States from Mexico more than 20 years ago. So, it was natural for him and a few friends to be open to starting one at their parish of St. Casimir, South Bend.

Since April, Bautista and others have been gathering on the first Saturday of every month to spend the night in prayer before the Eucharist. About 35 parishioners are committed to this ministry, and they hope others will join them.

At 7 p.m. Oct. 30, Bishop Kevin C. Rhoades will celebrate Mass at St. Adalbert. At that time, Raul Mendoza, president of the National Nocturnal Adoration Society, which started in 1928 and is currently headquartered in Texas, will officially inaugurate the local chapter into the national organization. 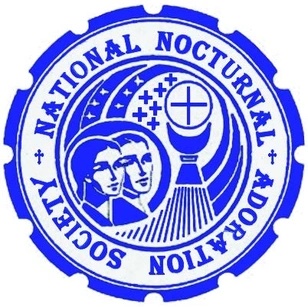 Mendoza sent out 150 invitations to chapters all over the United States to attend the Oct. 30 Mass in South Bend. Anticipating a positive response from many people, the Mass location was moved from St. Casimir to St. Adalbert, which is larger. Everyone is welcome to attend.

In a fully functioning nocturnal adoration society, women participate early in the evening and small groups of men take over for the entire night, spending an hour in prayer before the Blessed Sacrament and then resting, drinking coffee or participating in a Bible study or spiritual conversation.

Father Ryan Pietrocarlo, CSC, pastor of St. Casimir and St. Adalbert parishes, celebrates Mass at 9 p.m. Saturdays; after that, the Eucharist remains exposed. The nocturnal adoration group says some prayer in common, using a book with Spanish on one side of each page and English on the other; then small groups take their turns at silent prayer in the church. Adoration concludes around 6 a.m. Sunday morning.

The purposes of nocturnal adoration include responding to Christ’s invitation to keep prayerful vigil with Him, deepening the experience of communion with the eucharistic Christ who continues to offer Himself, living more consciously and actively the sacrament of unity, and interceding for the Church and the world.

Bautista finds it very powerful to pray for peace and for all the world’s families while others are sleeping, he said. “We’re like the Apostles.”

“Jesus felt alone before His passion; I feel very close to Jesus when I spend face-to-face time with Him in this way.”

Father Pietrocarlo also experienced nocturnal adoration when he was in Monterey, Mexico, about seven years ago. The number of adorers there was “much smaller, but very beautiful.”

“I was very inspired when parishioners came to me wanting to begin a nocturnal adoration ministry,” he said. “Their purpose was to foster a greater devotion to the holy Eucharist throughout the parish. It was very beautiful for me to see the love for the Eucharist in our parishioners, and this initiative to bring more people to it. The ministry is doing very well, getting 20-30 people every First Saturday to adore our Lord all night. And they are determined to keep inviting and bringing more people to the Eucharist.”