When one listens to the Holy Spirit, one thing can lead to another.

When she started a young adult prayer group because she needed support after graduating from a Catholic college, Colleen Mitchell didn’t anticipate meeting her future husband there. When she and Greg lost their 3-month-old son, Bryce, to sudden infant death syndrome, she had no idea God would channel the energy of their grief into founding an international mission in Bryce’s name. When she began studying the women of the New Testament, Colleen had no intention of writing a book. And when people from Fort Wayne began making short-term mission trips to Mitchell’s Costa Rica ministry, the Louisiana residents had no plans to move to that city.

As they set their sights on Myanmar, who knows what adventures lie ahead? 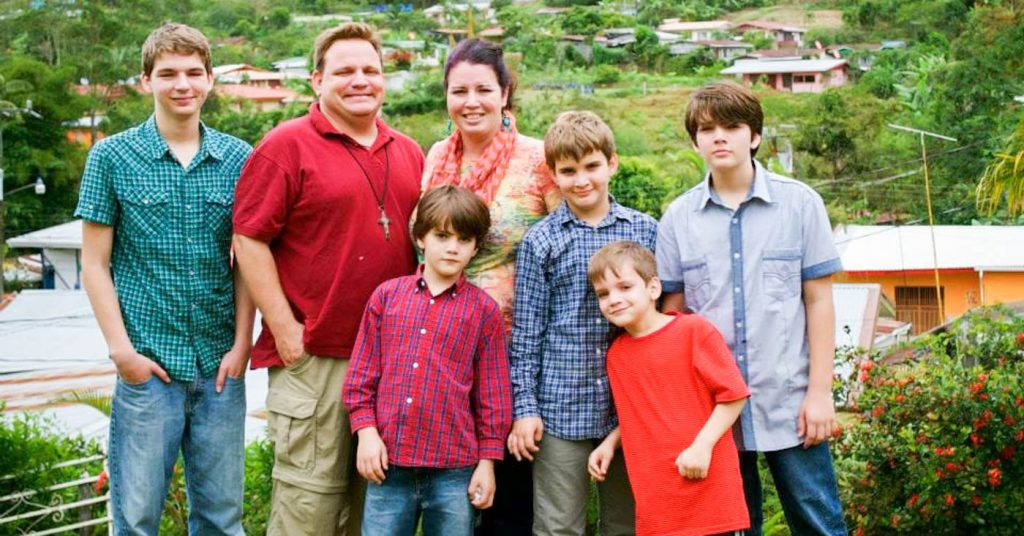 Greg and Colleen Mitchell and their five sons have experienced a Spirit-led journey that took them to Costa Rica, where they founded St. Bryce Missions.

Living in Lafayette, Louisiana, the Mitchells were involved in door-to-door evangelizing, outreach to the poor and short-term foreign mission trips. They had five sons, who now range in age from 10 to 19. In September 2009, they were devastated when they found their sixth son dead in his crib with no prior warning.

As she prayed, Colleen realized God wouldn’t ask them to endure such suffering unless he wanted to bring some good out of it. She begged not to get stuck asking “Why?” but to move forward to “What now?”

Self-employed in sales, Greg found the beginning of their answer on a business trip to Costa Rica. At prayer in the Basilica of Our Lady of the Angels, site of a Marian apparition, he met two missionary priests. They invited him to visit their mission among a remote, rural indigenous people, the Cabecar. As soon as he got home, Colleen realized her husband had left part of his heart with the mostly pre-Christian people. 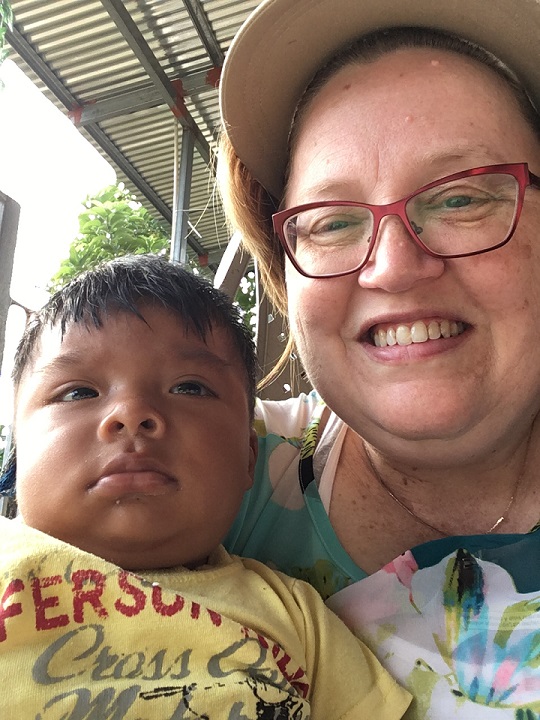 Heidi Hess Saxton holds Axel, one of the indigenous babies staying at the St. Francis Emmaus Center in Costa Rica, a home for expectant mothers founded by the Mitchell family of Fort Wayne and supported in part by Queen of Peace Parish, Mishawaka.

Within six months the family had opened their hearts to the possibility of moving to Costa Rica as full-time missionaries. They sold everything and arrived in Turrialba in January 2011.

The original vision of the St. Bryce Missions was to build chapels, then to assist in evangelizing and catechizing as their mastery of Spanish grew. However, they soon became aware of another need. Although there is a hospital in Turrialba, the Cabecar can only access it after an eight-hour walk and a long bus ride. As a result, the rate of infants dying before their first birthday was five times Costa Rica’s national average, which the government declared a national emergency. Colleen remembered how complicated it had been to take care of one sick child in the U.S., even with America’s abundance of economic, educational and medical resources. She began to pray about opening a maternity home where pregnant women could come at 37 or 38 weeks and stay until they were strong enough to return home after being released from the hospital. 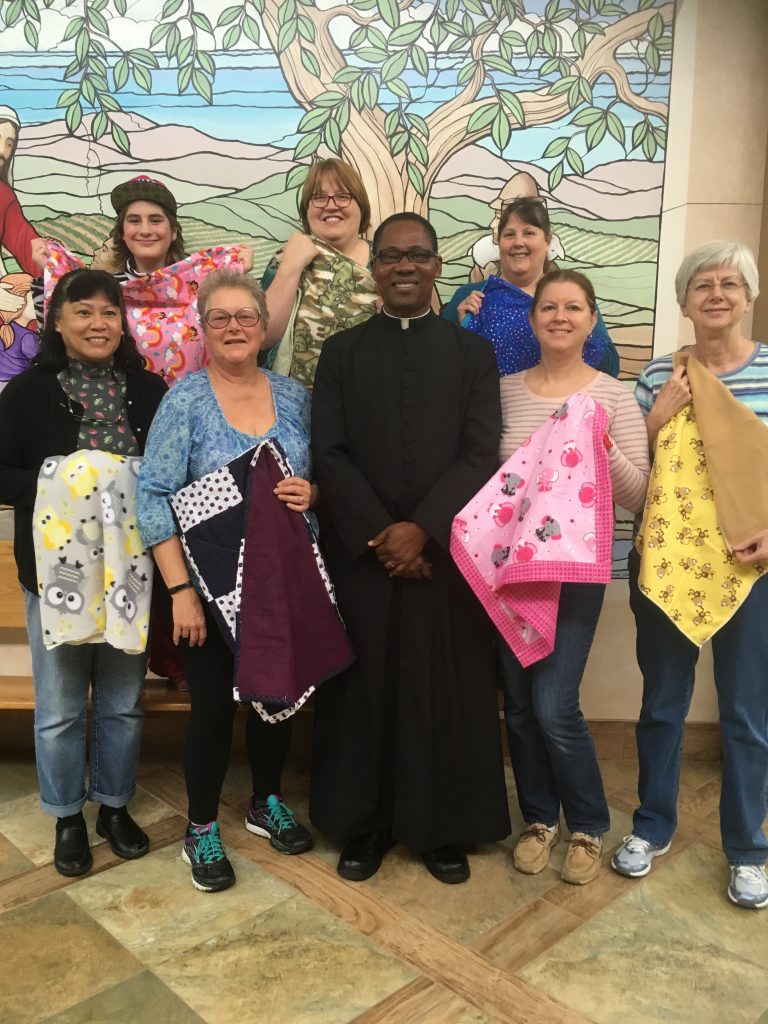 Father John Eze, Queen of Peace Parish, Mishawaka, stands among parishioners holding up the blankets they have made for the expectant mothers of St. Francis Emmaus Center in Costa Rica. In the front row, from left, are Melanie Crew, Francie Mills, Father Eze, Shane Harlow and Fran Bystry. In the back row are Sarah Saxton and Heidi Saxton and Marianne Rodtsbrooks.

The cost of building and staffing such a facility seemed daunting, until she realized they already had a place with beds, food, available transportation and Christian love: their own home. “Our doors are open, our soup pot is full, our prayer times are set; but we never know who will show up,” said Colleen. “Whomever God sends, we serve.”

In 2013 the Mitchells began welcoming mothers, moving several times as the work expanded. They also wound up caring for children with disabilities and preparing both mothers and infants for baptism, according to the diocesan catechetical plan.

Rather than provide a paternalistic alternative, the St. Francis Emmaus Center cooperates fully with the Costa Rican government, the medical system and the local Catholic diocese, providing a safety net to address gaps in those systems. Many of the mothers it welcomes have never encountered Christian love in such a tangible form or realized that they could develop a personal relationship with Jesus. Emmaus goes beyond simply receiving hospitality, to encountering Jesus during this stop on their road.

With 600 women in and out of their home each year, the ministry soon outgrew the largest house in town. The Bishop of Cartago donated a piece of property with a structure that could be remodeled to provide bed space for 30 women at a time, as well as housing for staff and volunteers, including doulas to accompany mothers through the labor and birth process. They have funds and ecclesial permission to build a eucharistic chapel on the grounds as soon as building permits come through. This will be a further step in fulfilling Pope Francis’ vision of “a poor Church for the poor,” founded on Christ’s eucharistic presence.

During the past year, Greg and Colleen became aware that their primary vocation should be the growing needs of their own family. As they prayed about where to relocate, close friends from a group of Catholic families who had come to work in Turrialba every summer made a proposal. This fall the Mitchells moved to Fort Wayne and St. John the Baptist Parish so that Colleen could teach Spanish and language arts to junior high students at St. Joseph School, where 90 percent of the students are of Mexican origin. Their oldest son started college at the University of Louisiana at Lafayette, the second is a sophomore at Bishop Luers High School and the other three attend St. Joseph. Greg still spends most of his time in Costa Rica, working to make the mission self-sustaining, although the Mitchells intend to remain closely involved in training, spiritual and financial support.

They also desire to replicate the maternity home model among other peripheral peoples. At the invitation of the papal nuncio, their next exploration involves Myanmar, which also has a very high maternal and infant mortality rate.

Colleen didn’t set out to be a writer, either; but in her lonely early days in Costa Rica, she was led to reflect on the women of the Gospels — mining their stories in an attempt to discover her own identity. Her journaling resulted in “Who Does He Say You Are?: Women Transformed by Christ in the Gospels,” published by Franciscan Media/Servant in 2016. A second book is due before the end of the year: “When We Were Eve: Uncovering the Woman God Created You to Be.”

As Colleen’s editor, Heidi Hess Saxton became intrigued by St. Bryce Missions. She, her husband, Craig, and their two teenagers accepted the Mitchells’ invitation to visit St. Francis Emmaus Home last May and June. In preparation for the trip, Heidi reached out to her parish, Queen of Peace in Mishawaka. The parish women’s Jubilee Society raised $200 to refurbish the center’s labor room with paint, equipment and a sound system. The youth group sponsored an event to make 40 baby blankets for new Cabecar moms. Queen of Peace Pastor John Eze called the Saxtons forward after Mass and gave them a blessing before they left on their trip.

Several Queen of Peace parishioners are interested in volunteering in Costa Rica next summer, and blanket making was so much fun it will probably happen again — perhaps for a local pregnancy center, they say. In Heidi’s words, “getting involved in a missionary project like this really provides an opportunity to use the gifts God has given us in ways that stretch our faith. My daughter got an unforgettable lesson about how other people live. They have so little, and yet they do so much with it. I know it was a blessing and a real, personal challenge for me and my family to respond to the call to do more than write a check — to give a piece of ourselves. And I know our friends at Queen of Peace felt the same.”