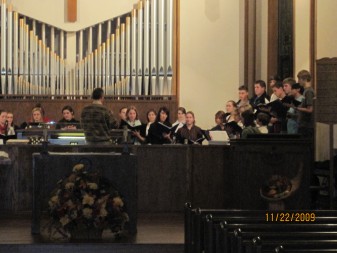 Claire Kenney Joe Higginbotham, director of liturgy and music at St. Bavo Church, Mishawaka, rehearses with the musicians and singers involved with A Festival of Lessons and Carols, which will be held on Sunday, Dec. 13, at 7 p.m., in the church.

MISHAWAKA — St. Bavo Catholic Church will bring A Festival of Lessons and Carols once again the local area. This form of worship is a reflective way to ring in the spirit of the Christmas season.

Joe Higginbotham, director of liturgy and music at St. Bavo Church, leads the musicians involved with the service. These musicians come from the surrounding area and include the Mishawaka Marian High School Liturgical Choir and the Antioch High School Youth Ministry.

“I am anticipating choir and instrumentalists totaling around 35 people,” Higginbotham said.

Eric Milner-White, whose interest in a more creative worship for the Church of England sparked this tradition, created the service’s dynamic. He borrowed much of the layout from an order created in 1880 by E.W. Benson, who later became the Archbishop of Canterbury.

Arthur Henry Mann arranged the music involved in this celebration of Christ’s birth, the true meaning of Christmas. The collaboration of these individuals led to its first performance on Christmas Eve 1918.

The following year the service was reconfigured. During this process, “Once in Royal David’s City” became a staple hymn to begin the celebration. The other hymns incorporated vary and are chosen by those producing the event.

The Festival of Nine Lessons and Carols was broadcasted for the first time in 1928. It remains a Christmas tradition celebrated around the world.
The layout of the service includes nine readings focused on salvation history and interspersed with song. Some specific examples of readings include the fall of Adam and Eve, Abraham’s sacrifice of Isaac and the birth of Christ.

However, the interpretation of such readings depends on the religious tradition. St. Bavo uses the Roman Catholic canon of Scripture in correlation with their faith base.

This year, St. Bavo Parish welcomes the associate pastor of St. Pius X Parish in Granger, Father Bob Lengerich, to preside over the celebration.
The readings chosen by Father Lengerich bring a certain dynamic to this form of worship.

“They are great readings and they seem to work quite well,” Higginbotham said. “I asked Father Bob if he wanted to change any of the readings this year, and he decided to stay with these.”

This year marks St. Bavo’s fifth annual celebration of A Festival of Lessons and Carols. The parish experienced a remarkable turnout in 2008.
“Last year the church was full for the event,” Higginbotham said.

Higginbotham, whose preparation for this event began in September, says A Festival of Lessons and Carols has a certain resonation with the public and those involved with production.

“How enthusiastic and excited the kids that participate are about the event,” he said. “Also, people that attend seem to have been greatly moved by the event; the combination of Scripture, inspired reflections and moving carols and hymns sung by very talented people is powerful.”