PHILADELPHIA (CNS) — The fallout from the Easter Sunday bombings in three Sri Lankan cities has reached a Philadelphia parish.

Father Kelley was set to travel to Sri Lanka to attend the planned May 4 ordination of Sheron Fernando, a seminarian who had served at St. Monica for four years while studying at St. Charles Borromeo Seminary in Wynnewood.

The Cinnamon Grand Hotel, where Father Kelley had intended to stay, was among the structures targeted in eight April 21 Islamic State group-linked attacks that destroyed two Catholic churches, an evangelical church and three luxury hotels. More than 250 people were killed, with some 500 injured.

For two weeks since Easter, Catholic leaders canceled Masses. Father Kelley said not being able to attend Mass has been “a big, big shake-up” for Fernando and his fellow seminarian Shalindra Kotikwatte, who had also returned to Sri Lanka for ordination after serving at nearby St. Richard Parish in Philadelphia.

Neither seminarian lost family members in the attacks, but their ordinations and their futures remain on hold for now. Meanwhile, parishioners at St. Monica have been anxiously inquiring after the well-being of their former seminarian.

“He was so loved,” said Father Kelley. “You know Italians; they fall in love with you. I have stockpiles of cards that I was going to take with me for his ordination.”

The parish embraced Fernando all the more tightly since Cardinal Ranjith had stipulated that his seminarians were to remain in the U.S. for the duration of their studies even during holidays and summer recess.

“I think the fact that he couldn’t see his mother for four years was hard and the whole parish became his mother,” said Father Kelley, who regularly invited the seminarian to his own family’s holiday gatherings. 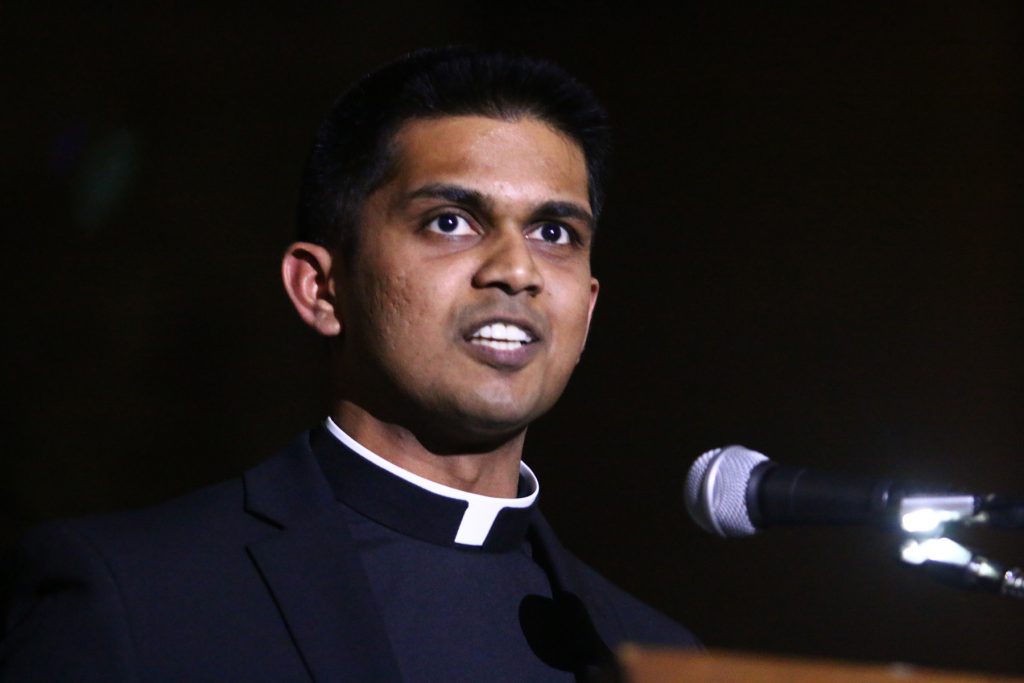 Sheron Fernando, shown in this Dec. 10, 2017 file photo, was a seminarian for four years at St. Charles Borromeo Seminary and served at St. Monica Parish in South Philadelphia before returning home to Sri Lanka for his planned May 4, 2019, ordination as a priest. His ordination has been postponed due to the recent terrorist bombing in the country, causing concern among St. Monica’s pastor and parishioners. (CNS photo/Sarah Webb, CatholicPhilly.com)

Given the uncertainty in Sri Lanka and his own pastoral obligations, Father Kelley is not sure that he will be able to travel there to attend Fernando’s ordination when it is ultimately rescheduled.

Although he remains in contact with the seminarian via cellphone, Father Kelley said it was Fernando’s daily presence at St. Monica, rather than communications technology, that expanded his parish’s worldview.

“It changed the parish so much, because we tend to be so parochial, and we say, ‘These are my parish boundaries and it doesn’t go beyond here,’” said Father Kelley. “But we had a guy here from half a planet away, and we shared the same kind of faith, which is a cement bond.”