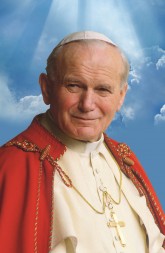 VATICAN CITY (CNS) — As Church officials keep emphasizing, Pope John Paul II is being beatified May 1 not for his performance as pope, but for how he lived the Christian virtues of faith, hope and love.
When the Vatican’s sainthood experts interviewed witnesses about the Polish pontiff, the focus of their investigation was on holiness, not achievement.

What emerged was a spiritual portrait of Pope John Paul, one that reflected lifelong practices of prayer and devotion, a strong sense of his priestly vocation and a reliance on faith to guide his most important decisions.
More than leadership or managerial skills, these spiritual qualities were the key to his accomplishments — both before and after his election as pope in 1978.

From an early age, Karol Wojtyla faced hardships that tested his trust in God. His mother died when he was 9, and three years later he lost his only brother to scarlet fever. His father died when he was 20, and friends said Wojtyla knelt for 12 hours in prayer and sorrow at his bedside.

His calling to the priesthood was not something that happened overnight. It took shape during the dramatic years of World War II, after a wide variety of other experiences: Among other things, he had acted with a theater group, split stone at a quarry, written poetry and supported a network that smuggled Jews to safety.

Wojtyla’s friends of that era always remembered his contemplative side and his habit of intense prayer. A daily Mass-goer, he cultivated a special devotion to Mary. In 1938, he began working toward a philosophy degree at the University of Krakow. A year later, the Nazi blitzkrieg of Poland left the country in ruins.

During the German occupation, Wojtyla began attending weekly meetings called the “living rosary” led by Jan Tyranowski, a Catholic layman who soon became his spiritual mentor. Tyranowski introduced him to the 16th-century Spanish Carmelite mystic, St. John of the Cross, who would greatly influence the future pope.

Wojtyla called Tyranowski an “apostle” and later wrote of him: “He showed us God much more immediately than any sermons or books; he proved to us that God could not only be studied, but also lived.”

At a spiritual crossroads in 1942, Wojtyla entered Krakow’s clandestine theological seminary. In the pope’s 1996 book, “Gift and Mystery,” he remembered his joy at being called to the priesthood, but his sadness at being cut off from acquaintances and other interests. He said he always felt a debt to friends who suffered “on the great altar of history” during World War II, while he pursued his underground seminary studies.

As a seminarian, he continued to be attracted to monastic contemplation. Twice during these years he petitioned to join the Discalced Carmelites but was said to have been turned away with the advice: “You are destined for greater things.”
He was ordained four years later, as Poland’s new communist regime was enacting restrictions on the Catholic Church. After two years of study in Rome, he returned to Poland in 1948 and worked as a young pastor. From the beginning, he focused much of his attention on young people, especially university students — the beginning of a lifelong pastoral interest. Students would join him on hiking and camping trips, which always included prayer, outdoor Masses and discussions about the faith.

Father Wojtyla earned a doctorate in moral theology and began teaching at Lublin University, at the same time publishing articles and books on ethics and other subjects. In 1958, at age 38, he was named an auxiliary bishop of Poland, becoming the youngest bishop in Poland’s history. He became archbishop of Krakow in 1964, and played a key role in the Second Vatican Council, helping to draft texts on religious liberty and the church in the modern world.

After Pope John Paul I was elected in the first conclave of 1978, Cardinal Karol Wojtyla said in a sermon in Poland that the papacy, “although it is a great office, is also a very great cross.”

He said of the new pope: “He took up the cross of contemporary man … of all the tensions and dangers which arise from various injustices: the violation of human rights, the enslavement of nations, new forms of colonial exploitation … wrongs which can be righted only in the spirit of Christ’s cross.”

A few weeks later, Pope John Paul I was dead, and the “cross” of the papacy fell to Cardinal Karol Wojtyla.

Early in his pontificate, on May 13, 1981 — the feast of Our Lady of Fatima — the Polish pope experienced a brush with death that intensified his already strong devotion to Mary. Mehmet Ali Agca, a Turk who had previously threatened the pope, shot and seriously wounded the pontiff in St. Peter’s Square. The pope’s life hung in the balance, and his recovery was slow. He credited Mary with saving him, and he later traveled to the Shrine of Our Lady of Fatima in Portugal, where he placed a bullet fragment removed from his body in the crown of a statue of Mary.

Years later, the pope published the “third secret” of Fatima, which described a period of suffering for the church and the shooting of a bishop in white — a figure the pope believed was linked to the attempt on his life.

Pope John Paul’s private prayer life was intense, and visitors who attended his morning Mass described him as immersed in an almost mystical form of meditation. He prayed the liturgy of the hours, he withdrew for hours of silent contemplation and Eucharistic Adoration, and he said the rosary often — eventually adding five new luminous mysteries to this traditional form of prayer.

The pope also took penitential practices seriously. In a book published after his death, the postulator or his sainthood cause, Msgr. Slawomir Oder, said Pope John Paul spent entire nights lying with his arms outstretched on the bare floor, fasted before ordaining priests or bishops and flagellated himself with a belt.

Throughout his life, Pope John Paul was a devotee of the Divine Mercy movement, which was founded in the early 1900s by a Polish nun from Krakow, Sister Faustina Kowalska. Her special devotion to the divine mercy of God was a theme the pope himself took up in his 1980 encyclical “Dives in Misericordia” (“Rich in Mercy”).

The pope beatified Sister Faustina in 1993 and canonized her in 2000, proclaiming the second Sunday of Easter as Mercy Sunday throughout the world. Pope John Paul’s death in 2005 came on the eve of Mercy Sunday, and his beatification May 1 will be celebrated on Mercy Sunday.

Pope John Paul canonized 482 people, more than all his predecessors combined. Although the Vatican was sometimes humorously referred to as a “saint factory” under Pope John Paul, the pope was making a very serious effort to underline what he called the “universal call to holiness” — the idea that all Christians, in all walks of life, are called to sanctity.

“There can never be enough saints,” he once remarked.

He was convinced that God sometimes speaks to the world through simple and uneducated people. St. Faustina was one, and he also canonized St. Padre Pio, the Italian mystic, and St. Juan Diego, the Mexican peasant who had visions of Our Lady of Guadalupe.

The world knows Pope John Paul largely because of his travels to 129 countries. For him, they were spiritual journeys. As he told his top advisers in 1980: “These are trips of faith and of prayer, and they always have at their heart the meditation and proclamation of the word of God, the celebration of the Eucharist and the invocation of Mary.”

Pope John Paul never forgot that he was, above all, a priest. In his later years, he said repeatedly that what kept him going was not the power of the papacy but the spiritual strength that flowed from his priestly vocation.

He told some 300,000 young people in 1997: “With the passing of time, the most important and beautiful thing for me is that I have been a priest for more than 50 years, because every day I can celebrate Holy Mass!”

In his final years, the suffering brought on by Parkinson’s disease, arthritis and other afflictions became part of the pope’s spiritual pilgrimage, demonstrating in an unusually public way his willingness to embrace the cross.

With his beatification, the Church is proposing not a model pope but a model Christian, one who witnessed inner holiness in the real world, and who, through words and example, challenged people to believe, to hope and to love.