As lawmakers gathered this week at the Indiana Statehouse amid the clamor of competing voices over the future of abortion in Indiana, the Catholic Church called for a united effort to protect all human life and care for women, children and families.

Indiana is the first state to call a special session of its legislature following the June 24 U.S. Supreme Court ruling in Dobbs v. Jackson Women’s Health Organization, which overturned the 1973 Roe v. Wade decision that declared a constitutional right to an abortion and legalized the procedure nationwide. The Dobbs decision returned the issue of abortion to the states, and on Monday, July 25, the Indiana General Assembly began considering legislation to restrict abortion and provide necessary support to mothers and children in need. 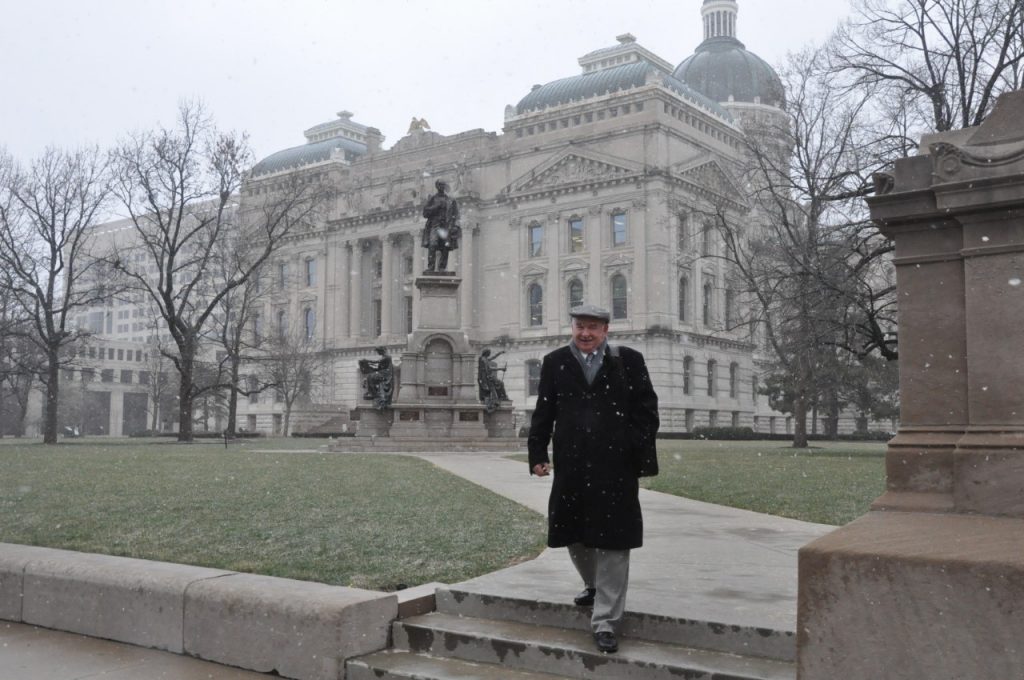 The Indiana Catholic Conference was in attendance for the Indiana Special Session this week.

The Indiana Catholic Conference (ICC) – the public policy voice of the Catholic Church in Indiana – hailed the special session as a pivotal moment for Indiana to promote a culture of life at all stages.

“We have a historic opportunity in Indiana to secure protections for unborn life,” said Angela Espada, Executive Director of the ICC, which represents the five Catholic bishops of Indiana. “We thank God for bringing us to this moment, and we recommit ourselves to lovingly and peacefully moving forward together to care for all mothers, families, pre-born and born children.”

All five Catholic bishops in Indiana issued statements following the Dobbs ruling, both praising the decision and reaffirming the Church’s commitment to caring for women and families in need. Now the ICC has issued guiding principles for proposed legislation, including protecting the unborn and acknowledging that every pregnancy involves more than one life – that of the child/children and the mother – and providing the best possible medical care for both.

The ICC is closely watching Senate Bill 1, which would prohibit abortion in Indiana with certain exceptions: preventing “a substantial permanent impairment of the life of the mother” and in cases of pregnancies resulting from rape or incest. The measure, authored by Sen. Susan Glick (R-LaGrange) and introduced on Monday, was the subject of intense debate throughout the week and was expected to receive a vote by Friday. If passed, it would move to the Indiana House for consideration.

While the Catholic Church supports some elements of Senate Bill 1, there are aspects not in keeping with Church doctrine, explained Alexander Mingus, Associate Director of the ICC.

“We support the general prohibition of abortion and the exception for the life of the mother because there are two human persons involved – each with a distinct right to life,” Mingus said. “We are happy that the General Assembly is seriously considering this issue. But if the intent is to pass legislation that protects pre-born children from elective abortion and preserves a doctor’s ability to provide lifesaving and life-affirming medical care, there are areas that need more attention.”

Among the ICC’s concerns with Senate Bill 1 is a lack of clarity surrounding enforceability of the law as well as the language surrounding the exceptions. That includes questions concerning what constitutes a critical medical situation for the mother, and the exemption of termination of a pregnancy due to a medical condition detected in the fetus that “is incompatible with sustained life outside the womb.”

“If this exception stays in the law, the ICC encourages at least a provision ensuring that parents are adequately informed, as we know that fetal anomalies do not always progress as doctors predict,” Mingus said.

He said the ICC was also disappointed that the legislation applies only to surgical abortion, not medication abortion.

“The Church remains committed to advocating for the dignity of pre-born and born human beings, accompanying moms in need and advocating for social supports that empower women and families as part of a consistent ethic of life,” Mingus said.

Such social supports are a key component of Senate Bill 2, which would establish the Hoosier Families First Fund and provide $45 million from the state general fund to assist pregnant women, postpartum mothers and families in need. The measure, authored by Sen. Ryan Mishler (R-Bremen) and Sen. Travis Holdman (R-Markle), also increases the maximum Adoption Tax Credit from $1,000 to $10,000.

ICC has long advocated for a comprehensive approach to upholding the dignity of life – from protecting the unborn to opposing the death penalty to providing adequate support for mothers, children and families. In recent years, for example, the ICC has supported legislative efforts to expand reasonable accommodations for pregnant women in the workplace and increase monthly payments in the Temporary Assistance to Needy Families (TANF) program, which has not seen a meaningful update in more than three decades.

Espada expressed gratitude for Indiana’s efforts to promote a culture of life and pointed to the key role that the Church has played and will continue to play in this effort, particularly in light of the Dobbs ruling.

“In keeping with its long history and experience assisting pregnant women, mothers and families, the Church will continue to support mothers and families through a multitude of ministries,” Espada said. “This includes Women’s Care Centers, Safe Haven Baby Boxes, Project Rachel for those who have undergone an abortion and the countless services provided through Catholic Charities and parish-based ministries. Through education and our witness to service, we will continue to work to change hearts and minds to recognize the dignity and rights of the pre-born child.”

The ICC encourages people to pray that women who believe themselves unable to care for their infants will allow their children to be born, and, if need be, will either make an adoption plan for their child or place their child in a safe haven.

At this critical moment for Indiana, the ICC also calls on the Catholic faithful to reach out to their elected representatives. Those wishing to contact their legislators asking them to protect the life of the unborn and promote services that help women and children can go to indianacc.org/action-alerts and select “Encourage Legislators to Support Unborn Life in Special Session.”

For more information and ways to get involved with the ICC and its mission, visit www.indianacc.org.