American Catholics will have an opportunity to become modern-day missionaries the weekend of April 29-30, when the Catholic Home Missions Appeal is being conducted as a second collection in many parishes throughout the U.S. Contributing to that collection is a way for Catholics to do missionary work without ever leaving their home or parish: The annual appeal supports more than 40 percent of the dioceses and eparchies in the United States and its territories in the Caribbean and Pacific, dioceses that tend to be rural and with enormous territories within their borders. Without the subsidies that come from the appeal, it would be difficult or impossible to support many of the religious programs in these regions or even some basic pastoral functions. Above, a mural depicting emerging Catholicism in North America by Frank A. Martinez greets people entering the Cathedral of Our Lady of the Angels in Los Angeles. The rendering depicts figures from early 18th-century California, including St. Junipero Serra, right, and native people building the missions and harvesting crops. The central figure at the top is Mary. — CNS/Nancy Wiechec 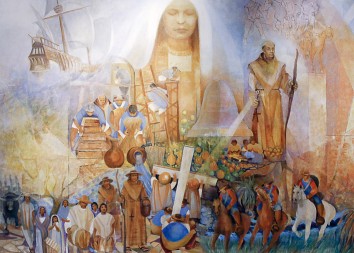