INDIANAPOLIS (CNS) — Bradley Gregory, associate professor of biblical studies at The Catholic University of America in Washington, said today “most scientists see that science can inform faith and faith can inform science.”

But many in the secular world have lagged in that understanding, he said.

He made the remarks in a talk titled “Faith, Science and the Gift of Wonder” during the Nov. 18-20 National Catholic Youth Conference in Indianapolis.

He addressed the fallacy that faith and science are incompatible. Gregory examined the history of the relationship between faith and science in the church, and how Catholics going forward can recover the traditional Church view of the compatibility of the two topics.

Gregory began his Nov. 19 address with a reading about the creation of the world in chapter 1 of the Book of Genesis. 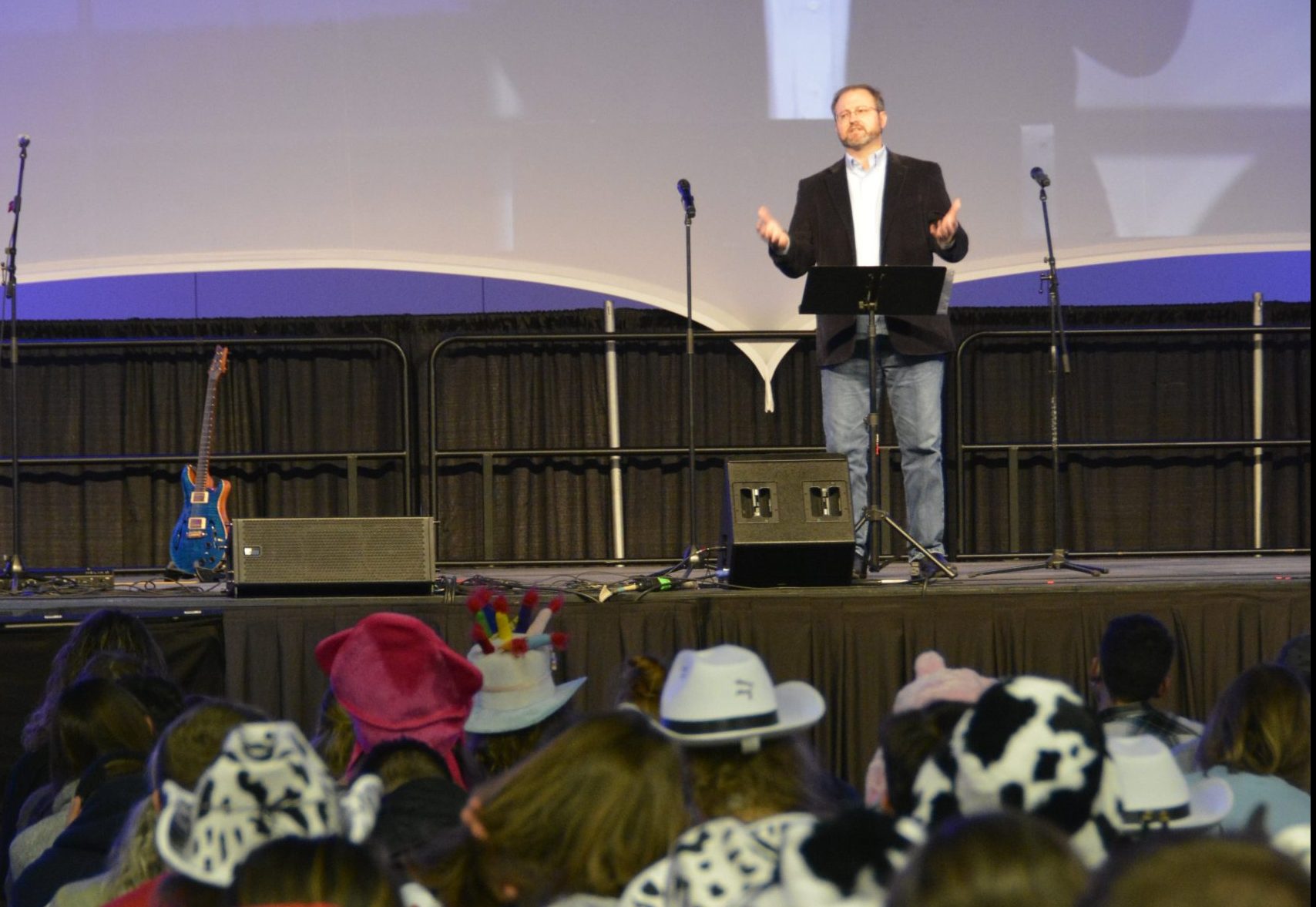 CNS photo/Natalie Hoefer, The Criterion
Bradley Gregory, associate professor of biblical studies at The Catholic University of America in Washington, speaks to youths in Indianapolis Nov. 19 during the National Catholic Youth Conference. He addressed the compatibility of science and faith.

Of course, he said, “Scripture is not a science text book. It’s an ancient text trying to communicate things about God, not chemistry or physics.”

When Genesis was written, “many people thought that the earth was an unpredictable and unsettling place,” he said. “Genesis, chapter 1, said no to that view of the world. … For our biblical writers and early Christians, the world was a theater that unveils the goodness, the truth, the beauty of God, not in spite of its natural laws, but precisely through those natural laws.”

The growing Church continued studying the world. By the medieval era, Catholic universities included math and the sciences.

So what happened? How did we get to the place we are today that so many believe that faith and science are opposites of one another?

“A couple hundred years ago, some people started thinking of God as one more character in the theater of a play of the created world,” Gregory explained. “People would look around and would find something else that made something happen, and ruled God out.”

“This left many people with the impression that God is unnecessary if we have science.”

Fortunately, he said, many theologians in the last 150 years have emphasized that science and faith are compatible.

“Pope Pius XII said the scientific advances of the past 200 years have shown us a lot about the bodies we have. He said what science can’t answer for us is the meaning of life and the nature of the soul.”

St. John Paul II, he added, “gave full support to the exploration of evolutionary science and the other sciences as things that would shed light on the world we live in.”

To “bring our hearts and imaginations back into alignment or strengthen their alignment with the traditional view of the Catholic Church,” Gregory suggested turning to Pope Francis’ encyclical “Laudato Si’.”

“The major theme of his encyclical is that for us to be right in relation with the created world, we need to recover a sense of wonder,” he said. “We need to stop seeing the world just as something we can exploit or abuse and find amazement that it’s the way God created it.”

Gregory closed with impressing upon the youths that “faith is critical to all intellectual work. All truth is God’s truth, and when you pursue it, it’s your wonder that will lead you to find God’s handiwork.”

Margaux Fellona, 18, loves Church history. She is from Abilene, Texas, where she belongs to the U.S. Archdiocese of the Military Services.

“I think it was really interesting,” she said. “I think it’s really important that we recognize the Church’s history and continue the traditions.”

Andrea Cox, 15, of the Diocese of Wichita, Kansas, said she walked away from the talk with a sense of awe for “how God made nature and how he made us, even.”

“I really appreciated the talk,” she told The Criterion, Indianapolis’ archdiocesan newspaper. “It made me think about the beauty of the earth God made for us, and it shows how much he loves us.”