OVIEDO, Spain (CNS) — A 22-year-old who was shot 11 times in the street and a 21-year-old stabbed to death after being imprisoned in his local church are among a group of nine Spanish seminarians beatified as Catholic martyrs from the country’s civil war persecution.

“They wanted to be priests, but God chose the altar of highest sacrifice for them in a Mass that does not end,” Archbishop Jesus Sanz Montes of Oviedo said in a pastoral letter. “Spain’s Christian history tells a paradoxical story through the bodies of its martyrs — the joy of life that survives the agonizing death of Christians killed in hatred of the faith, victims of a terrible confusion, a crazed persecution, a repression in the name of freedom which killed freedom.”

The archbishop published the letter to mark the March 9 beatification of Angel Cuartas Cristobal and four fellow seminarians, who were dragged from their seminary and shot before an angry crowd on Oct. 7, 1934, when republican forces overran Spain’s northern Asturias region.

Another seminarian, Mariano Suarez Fernandez, was shot at Oviedo the previous June, while the remaining three were killed during the subsequent 1936-39 civil war.

He said all nine had given their lives “in a gesture of supreme freedom, with a holy heroism made possible by God’s grace,” adding that their stories should summon local Catholics “to awaken their faith, and shake off any lethargic or comfortable mediocrity.”

Meanwhile, Cardinal Angelo Becciu, prefect of the Vatican Congregation for Saints’ Causes, who celebrated the beatification Mass, said the seminarians, ages 18 to 25, had all come from “simple Christian families and humble social origins,” but had also been “enthusiastic, cordial and devoted,” and “convinced of their vocation to the ministerial priesthood.”

“They were determined to follow the call of Jesus, despite the climate of religious intolerance, and knew the snares and dangers they faced,” Cardinal Becciu told those gathered in Oviedo cathedral.

“Their identity as ordinands amounted to a death sentence, which could be executed immediately, and there was no doubting the fate that awaited them once identified. In these tragic circumstances, each of them therefore consciously offered his life for Christ.” 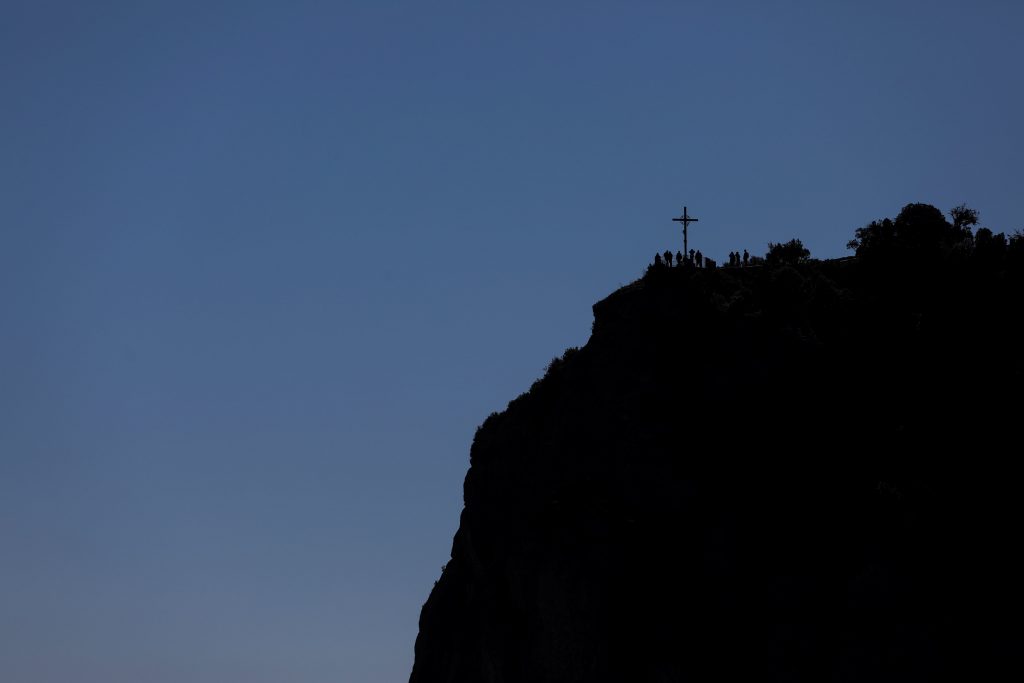 The cross of St. Michael is seen in Montserrat, Spain, February 3, 2019. A group of nine Spanish seminarians were beatified as Catholic martyrs March 13 from the country’s civil war persecution. (CNS photo/Susana Vera, Reuters)

Around 8,000 Catholic clergy and religious order members and tens of thousands of lay Catholics were killed during the 1930s conflict, after an anti-clerical Popular Front government sanctioned a campaign to desecrate and destroy churches, convents and monasteries.

An Oviedo archdiocesan statement said one seminarian, Gonzalo Zurro Fanjul, had shouted “Viva Christo Rey” (Long live Christ the King) when he was shot, while another, Sixto Alonso Hevia, had urged his family to forgive his persecutors before he was killed with a knife after being held in the local church with his father.

In his March 10 Angelus message, the pope said he hoped the “heroic testimony” of the nine seminarians would help contemporary Catholic clergy remain “clear-minded and open-handed” in their mission.

Coverage of international religious freedom issues by Catholic News Service is supported in part by Aid to the Church in Need — USA (www.acnusa.org).