The mission of Safe Haven Baby Boxes is to aid mothers in crisis, and the baby boxes that they have helped install in locations across Indiana, Ohio, Kentucky and even as far away as Arizona and Florida are a last line of defense for life. For the past two years, Knights of Columbus groups in South Bend have been working to bring a baby box to their city. That dream has finally come true as of Jan. 13, when a box was dedicated at Fire Station 11 on Bendix Drive.

Knights of Columbus Council 553, a combined council from several different parishes, helped spearhead these efforts. Knight Tim McBride spoke to Today’s Catholic about the council’s role in bringing the baby box to the area. 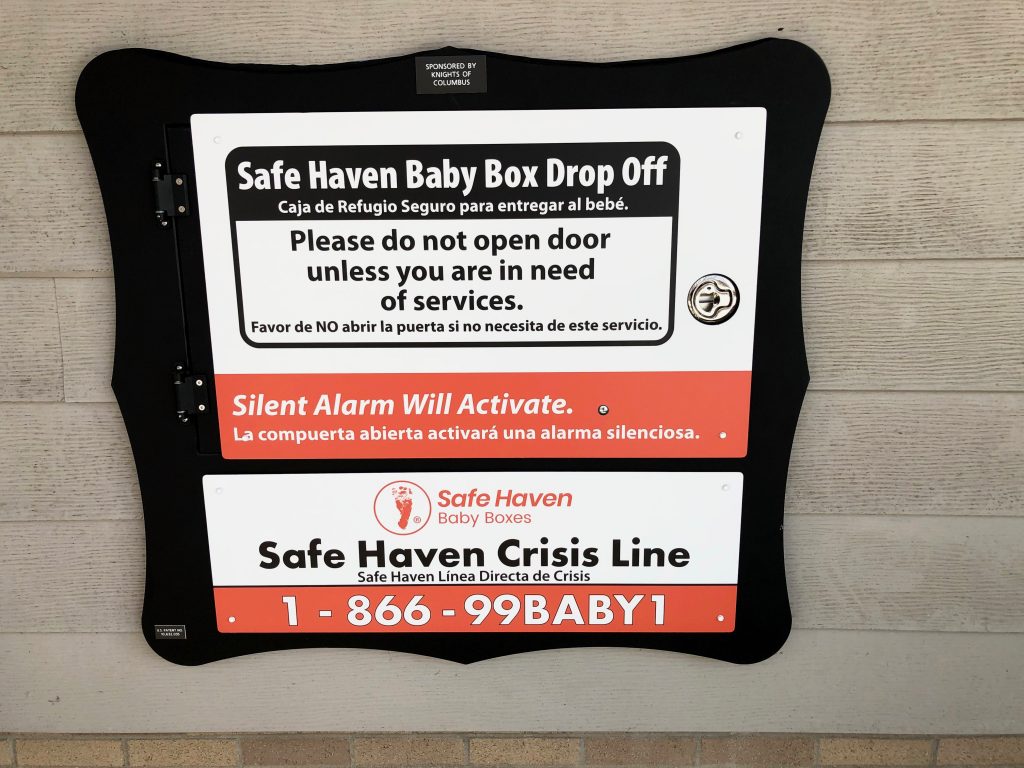 Through Indiana’s Safe Haven Law, anyone is able to surrender an infant less than 45 days old with any emergency service provider without revealing their name or other information, or, as Safe Haven’s billboards read, “No shame, no blame, no names.”

In spite of these laws, sometimes people feel too ashamed, embarrassed or afraid to surrender a child in a face-to-face situation. The case of a New Mexico woman who gave birth and abandoned her still-living infant son in a dumpster on Jan. 7 demonstrates the need for greater public awareness of the Safe Haven Laws, as well as an anonymous means of surrendering an infant. The hope is that the baby boxes could potentially prevent these devastating stories.

McBride told of a woman who worked closely with emergency personnel and so surrendered her infant in a nearby town’s baby box to remain anonymous.

Typically, these boxes are installed at hospitals or fire stations that have around-the-clock staffing. When a baby is placed inside, the exterior door locks once closed so that no one can reopen it and a silent alert is sent to personnel inside, who can retrieve the infant only through the interior door. The box has oxygen and is climate-controlled, so there is no danger to the child in the brief time he or she would be inside it. 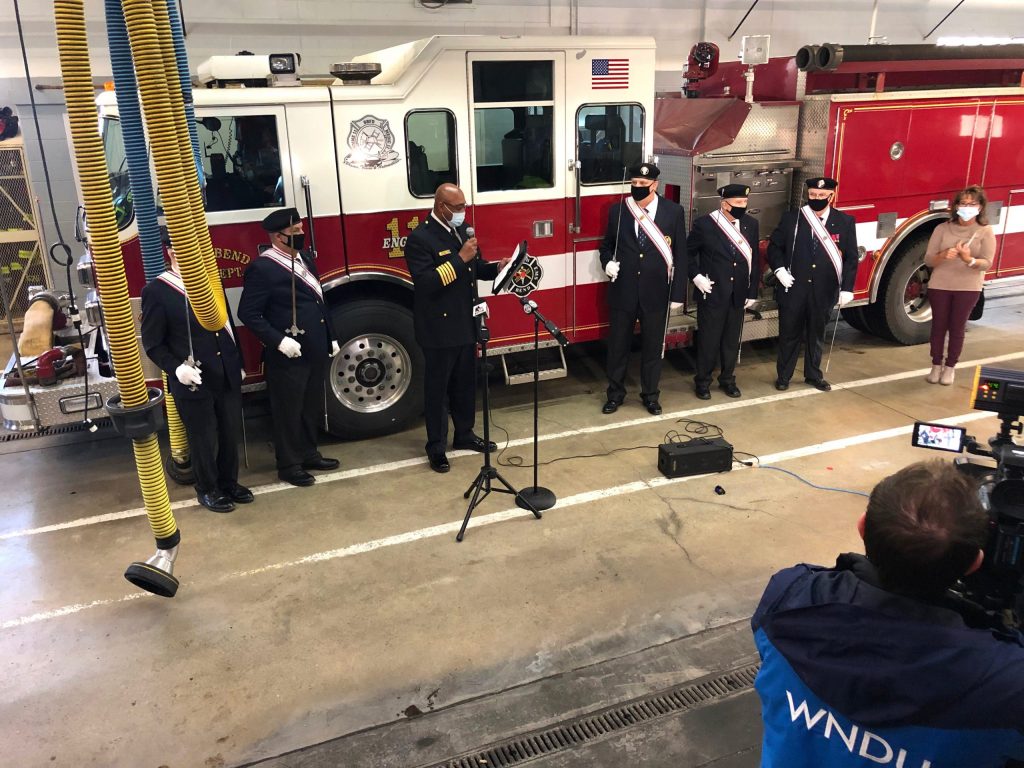 South Bend Fire Chief Carl Buchanon spoke at the dedication of the Safe Haven Baby Box, which was installed at Fire Station 11 in South Bend on Jan. 13. The Knights of Columbus color guard was present at the event, as Council 553 was instrumental in raising money for the baby box. — Provided by Tim McBride

Members of Council 553 learned all of this at their state convention years ago. They also learned that a baby box costs $10,000; half for the box itself and half for the billboards that Safe Haven puts up in the community to inform people of the Safe Haven Law, along with an additional $200 a year for maintenance. “We decided that this was a good thing, and decided to do it in South Bend,” McBride stated.

Within just a couple of weeks, Council 553 and the recently formed St. Thérèse Martin council at St. Thérèse Little Flower Parish had raised a large sum of money – enough for not just one baby box, but two. Much of the money came from the Knights themselves, which McBride noted was a testimony to the organization’s dedication to save lives and “help mothers have babies.”

Initially, community leaders in South Bend were not friendly to the idea of a baby box, but the mayor of Mishawaka was, so the Knights started there. Due to delays, that baby box is still in the installation process and should be functional soon. In the meantime, the Knights got word that South Bend mayor James Mueller had an interest in bringing one to that city, which had been their original target area. While waiting for the Mishawaka baby box to be installed, they again approached the idea of one in South Bend. 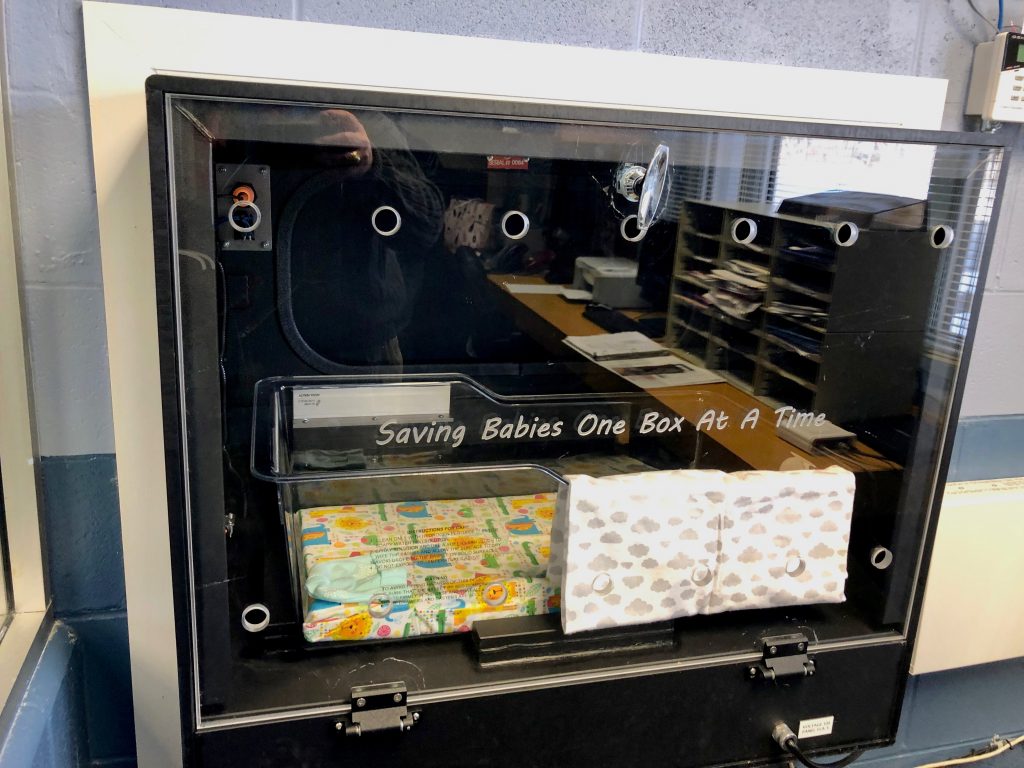 They brought Monica Kelsey, the founder of Safe Haven Baby Boxes, to speak with a group of community leaders, including fire department officials, and that is when the wheels began to turn. Kelsey is a retired firefighter and as McBride put it, “she got their attention” by speaking as one of their own about their role in saving lives. Most firefighters had never rescued an infant from a fire, but the baby box gave them a different opportunity to save a child’s life.

Though it was the Knights who raised the money for the baby box, McBride said that it was the fire department and the city that truly made it happen. There are specific location requirements for baby box placement: it cannot be in a public place, must be well-lit with sidewalks, yet without windows to maintain anonymity. The fire fighters dug and funded the new sidewalks; local unions finished them and completed the electrical work, all free of charge. First Response, a company that rebuilds homes after fires, volunteered to install the box for free at the fire station, which “laid aside another big issue,” said McBride.

First responders are trained to know what to do if an infant is placed in the box, and Safe Haven provides this training before the baby box goes into operation.

For McBride, the significance of this is more than “babies being put in there. I hope it sends a message that life matters here in South Bend. … It leaves the city with a statement – that life is important in this town.”

Around the same time the Knights were raising money for the baby box, the Women’s Care Center asked if they would be able to assist in purchasing an ultrasound machine for their ministry – a tool that is crucial in helping expectant mothers choose life for their unborn children. A matching donation by the national Knights of Columbus organization increased the $15,000 they raised to $30,000. McBride is proud to report that the Knights raised around $50,000 for the pro-life cause in a very short time period.

Father Jim Fenstemaker is the chaplain for Council 553 and also a Knight. He attended the dedication ceremony on Thursday to offer a blessing. South Bend Fire Chief Carl Buchanon spoke at the event, and Safe Haven founder Kelsey and other city officials, along with members of the Knights of Columbus were also present.

Father Fenstemaker praised McBride for steering the efforts to bring a baby box to South Bend. “Tim deserves a tremendous amount of credit – his enthusiasm, vision, energy level, commitment and dedication to this – he’s the reason this is happening.”

Council 553 is one of the diocese’s earliest councils, more than 120 years old, and at one time included most of the parishes in South Bend. Building a culture of life is part of the Knights’ principle of charity, and bringing a baby box to South Bend puts that principle into play. As Father Fenstemaker put it, “This is a wonderful sign of the dedication the Knights have for respect life issues and the pro-life movement.”