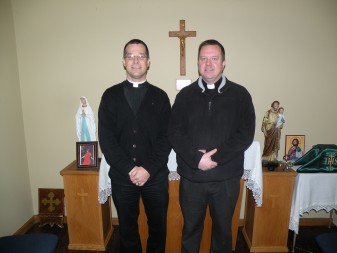 Father Daniel Whelan, left, and Father James Bromwich, right, the Sons of St. Philip Neri, are shown in their chapel located in Providence House at St. John the Baptist Parish in Fort Wayne.

FORT WAYNE — St. Philip Neri was a 16th-century saint who founded The Congregation of the Oratory. The saint was known for his missionary and evangelization work in Rome, care for the sick, emphasis on family and encouragement of “Just do good. Just do good. Be joyful.”

There are eight oratories throughout the United States, with communities in formation in Fort Wayne and Cincinnati.

“We’re not an oratory yet,” emphasized Father James, the association’s moderator, “that only happens when Rome says you are an oratory.”

In August, Bishop Kevin C. Rhoades issued a decree and approved them “officially as a community to be working toward an oratory,” noted Father James.

Both priests were ordained diocesan priests for the Archdiocese of Louisville, Ky. Father James was ordained in 2003, Father Daniel in 2004.

Father Daniel, who is the treasurer of the association, said both priests loved being diocesan priests and parish life.

“Independent of each other, both of us felt as if we were called to something more — not that we were unhappy,” said Father Daniel.

“There was this push to do something more, and maybe in a different way,” added Father James, who felt, at first, that maybe it was a call for him to join a religious community.

“As we researched it, researched St. Philip Neri, and visited oratories in New Jersey and Pittsburgh, and talked to a couple others by phone,” Father James said, “we realized ‘this is it!’”

Father James explained that the oratory is like a cross — Blessed John Henry Newman was an Oratorian — and he called it a bridge between religious life and diocesan priesthood.

“We live in community,” he said. “We pray every evening in what’s called an ‘oratory.’ We pray vespers together. We meditate on Scripture. We eat a meal together.”

“The oratory remains the most important thing that we do as a community,” said Father James.

“Thursday nights are our family time together where we have recreation,” Father Browich said. “That is supposed to be modeling for the laity in a certain respect. We hear a lot today that families should be eating and praying together. Well, we do. …”

“We wanted to make sure that there was a strong emphasis on family,” Father Daniel added. “Families are under great attack right now. When we came across the oratory and what St. Philip said about the oratory: ‘We are a family. We live as a family.’ That’s why an oratory stays very, very small.” Most oratories have 15 to 16 men at the most.

“Once you work on that holiness within your own community, then you can go out and work with the holiness of the laity and with other families,” Father James said.

The Secular Oratory, Father James said, would meet once a month for prayer, a meal and formation.

St. Philip Neri emphasized the community as a family, and the “way to holiness is through the Oratory itself,” said Father James. “Through the community of men living in the oratory and praying together, eating together and supporting one another, so that the inner-life within that community would be a key.”

The Sons of St. Philip Neri have many apostolic works in the Diocese of Fort Wayne-South Bend. Both Father James and Father Daniel share chaplaincy work at St. Joseph Hospital.

They both believe that a college presence is important as well. Father Daniel is the chaplain of the Newman Catholic Fellowship at Indiana University-Purdue University at Fort Wayne. Father James is an adjunct professor at the University of Saint Francis in Fort Wayne.

Father James also founded the Neri Institute that does research — using the tools from natural law, Catholic social doctrine, etc.  — and produces papers, film and radio documentaries that promote the dignity of life. These findings are shared with legislators and the media. They also incorporate new media such as blogs and Twitter to share their message. The institute draws college students in a role of research and scholars as interns, fellows and volunteers. More information may be found at www.neriinstitute.com.

Many who participated in the Eucharistic Procession through the neighborhoods of Fort Wayne last June may have seen the two priests going door-to-door explaining the meaning of the procession to the people. This door-to-door activity is another apostolate of the Sons of St. Philip Neri.

“Everybody comes with their own gifts and they contribute them as priests and brothers too,” Father Daniel said. “There is great opportunity for variety and ministry.”

Oratorians serve the “family” as priests and brothers. When accepted, new men serve a “guestship” to discern if the life is right for them, and then a novitiate. After one year, those interested in the Priesthood would attend seminary, and those interested in religious life as a brother continue their novitiate and studies.