The men of the Sons of St. Monica at St. Monica Parish in Mishawaka started the group because they missed the opportunities they had in the past to hang out together while they coached their kids. But it has grown into something much more than they initially thought.

Current president of the club, Frank Millar, explained that the first president, Mark Szuba, himself and a couple of other men coached their girls’ athletic teams through grade school.

“After that no one saw each other except at Mass,” he said. So they decided to get the old crew together on a regular basis.

The Sons of St. Monica formed in January 2015 and is both a social and service group. “Now it’s more service than anything,” Millar said. 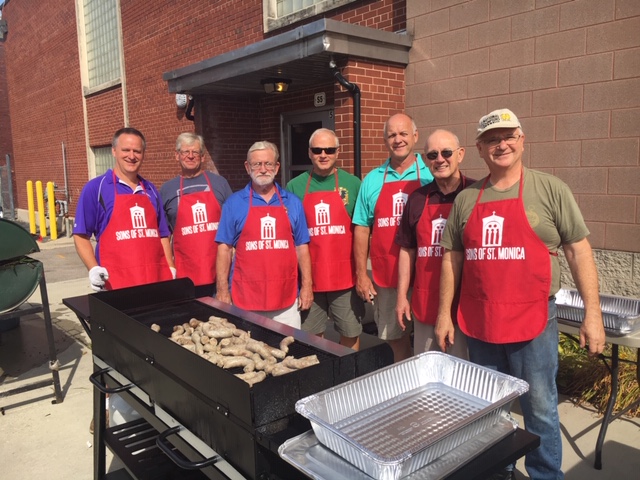 Among the Sons of St. Monica members are, from left, president Frank Millar, past president Mark Szuba, Don Schlundt, Ron Nalepinski, Jerry Horban, Jim Krzyzewski and Bill Molnar, all manning the grill at the Aug. 25 St. Monica Parish festival. The Sons of St. Monica parish service club was born several years ago out of a desire among fathers and other men in the parish for fraternity. — Photos provided by Frank Millar

There are about 20 members, and the men meet on the second Tuesday of each month. The meetings open and close with prayer, and in between there’s usually card playing and a beer or two. Millar said if someone has something going on in his family, there may be extra time devoted to praying for that intention.

Outside of the Tuesday night meetings the guys keep busy with service projects around the parish. St. Monica also had its annual parish festival on Aug. 25, and the Sons of St. Monica purchased the corn and sausage and grilled it for the festival.

“We’ve done that the last three years. The night before we prep all the food — soak the corn and parboil the sausage,” he said, and then they man the grills during the festival.

According to Millar, the group has also done a lot of work on the rectory. “One member donated the hardwood flooring, and we installed that.” Before current pastor Father Jacob Meyer moved in, they painted the rectory as well.

The Sons of St. Monica have taken care of several maintenance projects in the church, including repairing splintering pews, replacing the tread on the stairs leading to the church basement and pouring cement on church grounds where needed. In two weeks they’ll start working on two window wells, scraping and painting them. “They’re a real eyesore,” Millar said.

The group raised funds to purchase new pre-lit Christmas trees for the church and does heavy cleaning of the church before Christmas and Easter.

Millar said the parish went through some financial difficulties five or six years ago, and the Sons of St. Monica helped with that. “We’ve taken some of the burden off by raising money and doing some of the labor ourselves,” he said. The men also help support young men from the parish who are discerning a vocation to the priesthood in the seminary.

Father Meyer said the men have been a tremendous help. “The Sons of St. Monica bring so much — not only to the community, but help to the pastor,” he said. “If I need something done, I just call them and it’s done. And if these guys see something broken, they just fix it. They bring a lot of great experience in construction and finances, and they want to pass it on to the younger generation,” he said.

He considers the Sons of St. Monica a discipleship group, as they invite and mentor young men. “They come to the YA events and tell them about the group. They’ll say, ‘We drink beer, play cards and fix stuff.’”

Father Meyer noted that they teach the younger men their skills. The Sons of St. Monica will ask if they have a home, and if something in it needs repaired. If they younger men don’t know how to fix it, they’ll teach them.

The pastor also said that in this mobile millennial generation, a lot of the young men don’t have family nearby.

“They’re providing solid grounding for them and a service of assistance. Pope Francis says we need to help families … these men are saying, ‘We have skills you need to learn, and we’ll teach you.’” 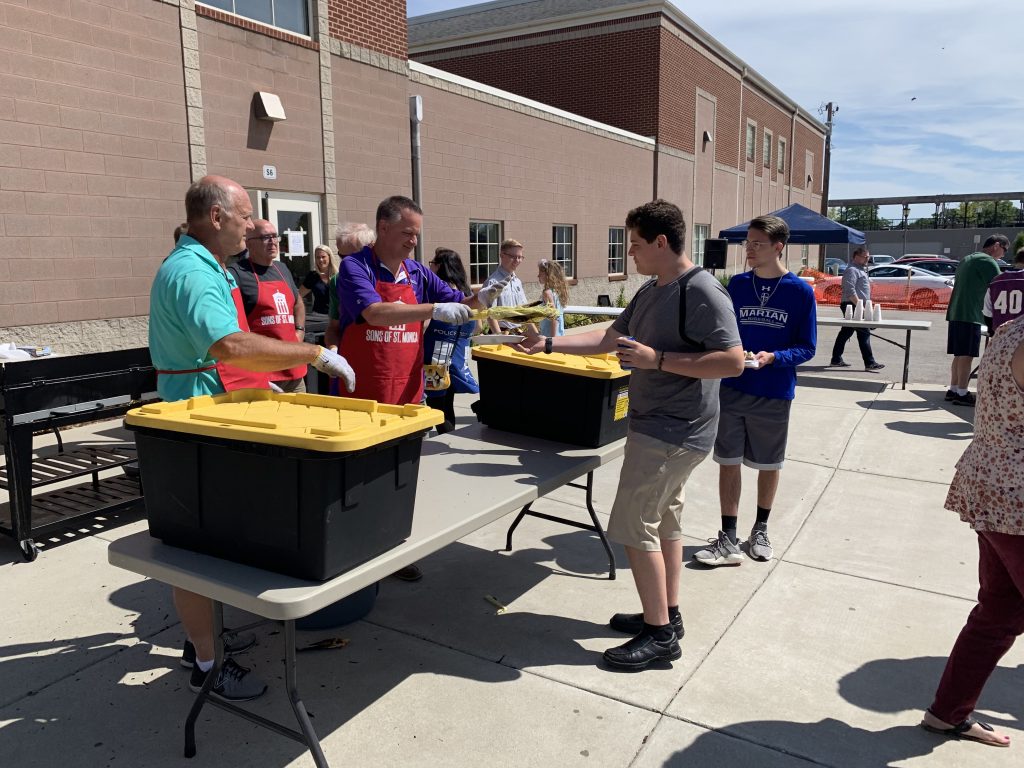 Sons of St. Monica members distribute corn at the annual St. Monica Parish festival. The group has supplied and cooked the corn and sausage for their Mishawaka parish’s festival for the last three years.

Millar said the Sons of St. Monica group has helped all its members. “It’s definitely brought us closer together. I know a lot more folks. A lot of the members I didn’t know when we started the group.”

When asked how important he thought it was for Catholic men to get together with other Catholic men, Millar responded: “The Sons of St. Monica and similar groups are important to the parish. Many people are hesitant to put their names on a sign-up sheet or join a committee for fear that they’ll end up having to lead the project. The Sons are a fellowship of men who care deeply for this parish, who see a need and respond collectively. We all have unique talents that thrive in this informal setting. And, if you can spend some quality time with your neighbor in a relaxed atmosphere with a deck of cards and a beverage, that’s not all bad either.”

Father Meyers said, “I love their spirit, too. They say, ‘We love our parish, we’re part of the family and we need to help provide for the next generation.’ As a pastor, I feel very blessed to have the support of this group of men.”