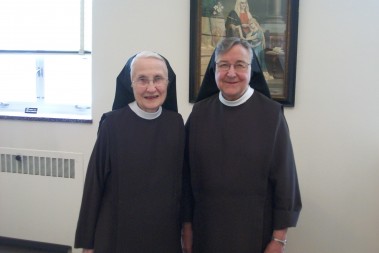 Two Sisters of St. Francis of Perpetual Adoration, Sister Anna Marie, left, and Sister Jane Marie, right, recall how they took care of Dr. Martin Luther King, Jr., at St. Joseph Hospital in Memphis, Tenn., on April 4, 1968. The University of Saint Francis, sponsored by the Sisters of St. Francis of Perpetual Adoration, will host a free seminar titled, “The Future of Education — Connecting to Careers, Educating for Peace,” on June 5 at 4:30 p.m. in the USF Performing Arts Center in downtown Fort Wayne. A long-range view of education and its intersection with partnerships leading to careers will coincide with the 50th anniversary of Dr. Martin Luther King Jr.’s speech on social justice at the historic Scottish Rite, now the USF Performing Arts Center.

MISHAWAKA — Sister Jane Marie, chair of the Board for the Franciscan Alliance, and Sister Anna Marie, directress of novices recall fondly the years they worked together at St. Joseph Hospital in Memphis. However, one night stands out for these Sisters of St. Francis of Perpetual Adoration that they will never forget.

It was April 4, 1968 and on the other side of Memphis, Dr. Martin Luther King Jr. had been shot and was being transported to St. Joseph Hospital. King had requested that if anything happened to him that he be taken to a Catholic hospital.

“We were out walking when I was paged. It was a beautiful evening and we were off that night. I ignored the first page because we were enjoying our time off. When I was paged the second time right away again I thought something must be going on and we better return to the hospital. We were told when we arrived that King had been shot and was in emergency room,” said Sister Jane Marie.

The hospital was locked down by the FBI to protect King and keep the employees safe. “All eyes were on the hospital. Everyone knew he was there and the news coverage announced he had previously requested to his staff that he be taken to a Catholic hospital. In reality, there was little we could do for him,” Sister Jane Marie said.

King’s staff members were there, along with prominent members of the NAACP that worked with Dr. King. The sisters were allowed to go into King’s room and pray for him. “We wanted to be with him, to give him comfort. We knew it was only a matter of time before he died,” said Sister Anna Marie.

When King died the city prepared for the worst. “The announcement was delayed by several hours. The police wanted to ensure the safety of King’s staff and the other members of the NAACP. The police believed they were potential targets so they needed to get them out of hospital. They were also waiting for extra police because they knew the city could erupt in violence when the news was released of King’s death,” said Sister Jane Marie.

The police were right to prepare. As soon as the news broke that King had died, riots broke out all over Memphis. “We opened our cafeteria and began to make sandwiches for the police. I think we fed every one of them that night. It was good to serve them and we were happy to have them around. It was a scary time,” remembered Sister Anna Marie.

The city would endure more violence in the following days and weeks. A curfew was established and the streets were empty at 7 p.m. each night. “It was so eerie, to see a major city so quiet. It was a difficult time. We had to send notes with all employees since they were coming in and out of the hospital past curfew,” Sister Anna Marie recalled.

Both women believed in the power of King’s message. “When I arrived in Memphis in 1965,” remembered Sister Jane Marie, “it was a real culture shock. I was not prepared for the blatant discrimination, the separate bathrooms, and the way the white people talked about blacks. It was so shocking to me.”

Sister Anna Marie agreed. “When I first started at St. Joseph hospital in 1962 we didn’t even take black patients. I truly had my eyes opened to what real discrimination looked like. I was relieved when we were allowed to serve everyone. King’s mission helped make that happen. He was a powerful man with a message of love.”

Both sisters were honored to meet Dr. King’s widow, Coretta Scott King in 1995. “We wanted to know why she didn’t come to the hospital that night. We thought she was coming to Memphis. She told us she had planned to come, but when they told her King had died she decided to stay home. She explained that there was nothing she could do for him, he was with the Lord, so she thought her place was at home to comfort her children,” said Sister Jane Marie. The sisters enjoyed speaking with her and felt humbled that she shared some time with them. “She was a beautiful woman with such strength,” recalled Sister Anna Marie.

Both sisters recall their time at St. Joseph hospital fondly. “I am glad I was there to serve the poor people of Memphis. It was a challenging time,” said Sister Anna Marie.

Sister Jane Marie agreed saying, “It was a unique time in history and looking back it is hard to believe I was there. Dr. King’s dream for his people was so powerful, his message so strong. I think he knew something would happen to him. His death was a powerful testament to his life. His message remains just as important today.”