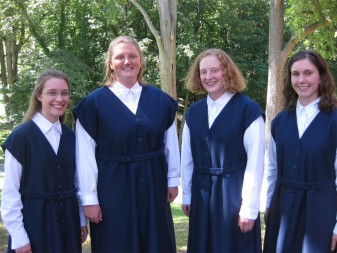 Heidi comes from St Boniface Parish in Lafayette. She graduated from Franciscan University where she majored in computer science. Heidi met the Sisters of St. Franics at St. Boniface where the sisters have been teaching since 1875.

Alexa hails from St. Patrick Parish in Kokomo. Before entering, she studied elementary education at Indiana University-Kokomo. She came to know the Sisters of St. Francis when she attended Lafayette diocese’s Destination Jesus Retreat, followed by retreats at the motherhouse in Mishawaka.

Jordan is a member of St. Anne, Mother of Mary Parish in Mexico, N.Y. She attended Franciscan University of Steubenville, studying social work. It was there that she met the sisters.

Jessica is a member of the Cathedral of the Immaculate Conception in Fort Wayne. Jessica met the sisters at the University of Saint Francis in Fort Wayne, while taking classes in theology.

As postulants, these young women will live at the motherhouse with the Sisters in Mishawaka, participate in the Conventual Liturgies and Perpetual Adoration while studying the catechism and the spirituality of the congregation. These young women appreciate continued prayers as they seek to dedicate their lives to the service of God and His Church.

New novices
Having competed their postulancy, Laura Elstro from the Archdiocese of Indianapolis and Diana Loiselle, from the Diocese of Lafayette-in-Indiana, were officially admitted into the novitiate of the Sisters of St. Francis of Perpetual Adoration and given the names Sister Maria Kolbe and Sister Theresa Marie.

They were invested with the brown Franciscan habit and received a crucifix as a sign of their willingness to follow Christ on Aug. 10. They were presented with the Liturgy of the Hours, which they are now commissioned to pray in the name of the Church. And finally, the sisters were given the Franciscan Rule and the constitution of the congregation. These sisters will spend the next two years as novices, deepening their prayer life and experience of religious life, studying the theology of religious life and the vows of poverty, chastity and obedience.

Sister Mariana professes her first vows
Later that same day, during Mass, Sister Mariana Collison, of the Diocese of Lafayette-in-Indiana, professed her first vows with the Sisters of St. Francis of Perpetual Adoration. In her desire to follow Christ more perfectly, she vowed for three years to live in chastity for the sake of the kingdom of heaven, to choose a life of poverty and to offer the sacrifice of obedience. Sister M. Angela, the provincial superior, accepted her vows in the name of the Church. During the liturgy, the white veil which she wore as a novice was exchanged for a black veil as an outward sign of her profession.