MISHAWAKA — The Sisters of St. Francis of Perpetual Adoration celebrated the days surrounding the feast of St. Clare with great solemnity, as they witnessed several young women taking their next step in religious life.

This fall, Sister M. Veronica will begin working at the Franciscan St. Francis Health Neighborhood Health Center, part of the sisters’ healthcare apostolate located in Indianapolis. She is a former parishioner of St. Joseph Parish, Hammond.

Sister M. Lissetta resides at the motherhouse in Mishawaka, where she continues to participate in the apostolate of Perpetual Adoration and teaches second grade at St. Anthony School, South Bend. 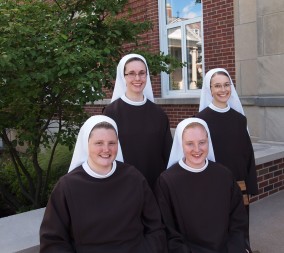 Four young women were admitted to the novitiate on Aug. 10 after completing a year of postulancy.

During the investiture ceremony, new brown habits were blessed by the chaplain and presented to the postulants by the Provincial Superior Sister M. Angela. While the community sought the intercession of the Blessed Mother through the rosary, the new sisters dressed in habits and white veils before returning to chapel to pray Midday Prayer.

The provincial presented each new sister with a crucifix, a copy of the Rule and Constitution of the community, Liturgy of the Hours book and her new religious name.

Alexa Richey was given the name Sister Mary Grace of St. Joseph. She comes from St Patrick Parish in Kokomo.

Jordan Henneberry will now be known as Sister M. Ignatia of St. Joseph. Hailing from St Anne, Mother of Mary Parish in Mexico, N.Y., she met the sisters while studying at Franciscan University of Steubenville.

Jessica Richardson received the name Sister M. Lucia of St. Joseph. Her family belongs to the Cathedral of the Immaculate Conception in Fort Wayne, where she met the Sisters at the University of Saint Francis.

These sisters will spend the next two years growing in their relationship with Christ through prayer, studying about religious life, and experiencing this through community life and the apostolate. 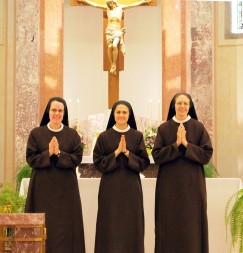 Later this day, three novices professed temporary vows of poverty, chastity and obedience for a period of three years. Sister M. Angela accepted their vows in the name of the Church. During the liturgy, the white veils, which they wore as novices, were exchanged for black veils as an outward sign of their profession.

Sister M. Petra Nielson has been assigned to the motherhouse, where she will begin to work for the corporate office of the Franciscan Alliance healthcare system as she pursues a master’s degree at the University of Notre Dame. A former member of St. Matthew Cathedral in Washington, D.C., Sister M. Petra became acquainted with the sisters as a child at Our Lady of Grace in Highland.

Sister M. Benedicta Duna has been assigned to St. John Convent, St. John, where she will teach junior high religion at St. John School. A graduate of the University of Notre Dame, Sister M. Benedicta’s family are members of St. Raphael Parish in Bay Village, Ohio.

Sister M. Cecelia Clare Stoffel will reside at the motherhouse, teaching music at St. Anthony School in South Bend and serving the community as choir director. She will join in the community’s apostolate of Perpetual Adoration and assist with vocational activities. Her parents reside in Summerset, S.D., where Sister Cecelia Clare was a member of Our Lady of the Black Hills Parish in Piedmont, S.D. 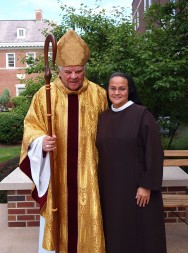 On the feast of St. Clare, Aug. 1, Sister Mary Vianney Grau vowed to God to live until death in poverty, obedience and chastity as a Sister of St. Francis of Perpetual Adoration.

During the Mass, Bishop John M. D’Arcy, bishop emeritus, asked the congregation to join him in praying the Litany of the Saints before Sister Mary Vianney professed her vows to Sister M. Angela. Bishop D’Arcy blessed the ring, which Sister Mary Vianney now wears as a sign of her consecration as a spouse of Jesus Christ and member of her religious community.

Originally from the Dominican Republic, Sister Mary Vianney became acquainted with the Sisters at St. Boniface Parish, Lafayette. She resides at the motherhouse, where she assists in Perpetual Adoration and serves as a sixth-grade teacher at St. Anthony School, South Bend.

Each of these sisters appreciates the continued prayers of the local Church as she strives to make of herself a total gift to Jesus Christ.