Solidarity with a saint’s powerful witness of love for the Lord infused a Mass that took place Aug. 9 and at which Sister M. Benedicta Duna, OSF, made her perpetual profession of vows with the Sisters of St. Francis of Perpetual Adoration. 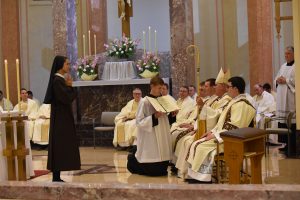 Sister Benedicta makes her perpetual vows in front of the congregation, priests and celebrant Bishop Kevin C. Rhoades during a Mass at St. Francis Convent, Mishawaka, on Aug. 9. Photos by Derby Photography

Bishop Kevin C. Rhoades pointed out in his homily, on the occasion, that Sister Benedicta was professing her own lifetime commitment on the feast day of a woman whose martyrdom at Auschwitz still inspires people.

“How appropriate it is that Sister Benedicta takes her vows on the feast of St. Teresa Benedicta of the Cross,” Bishop Rhoades said, noting that the saint, whose name was Edith Stein before she converted from Judaism and became a nun, perished in the concentration camp exactly 75 years earlier, on Aug. 9, 1942. 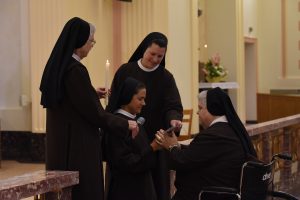 Sister Benedicta of the Sisters of St. Francis of Perpetual Adoration, Mishawaka, receives a blessing from Sister M. Angela Mellady before receiving her ring to symbolize her lasting covenant with God and her espousal to Christ.

“Where God seemed to be absent, St. Teresa Benedicta witnessed to His presence,” Bishop Rhoades told the congregation in the chapel of St. Francis Convent in Mishawaka. The saint’s model of faithfulness is the foundation for Sister Benedicta’s “vocation to love,” he said, just before the rite in which provincial superior Sister M. Angela Mellady received the young sister’s vows.

In an earlier interview, Sister Benedicta recalled how Edith Stein had influenced her own vocational discernment and the choice of her new name. While an undergraduate at the University of Notre Dame, she had been moved by her participation — and later leadership roles — in the school’s annual Edith Stein conferences. The student-run gatherings explore the martyr’s lifelong pursuit of truth and insights about “who the Lord is calling us to be as women, and how we can serve the church being who we are.”

Sister Benedicta will now serve as assistant vocation director for the community, traveling to college campuses, talking with women about discernment and “helping them to see their dignity” in a relationship with Christ.

Her own journey, starting out in the suburbs of Cleveland as one of seven children in a family with strong Hungarian roots, led to an undergraduate degree from Notre Dame and a master’s degree in theology from Franciscan University of Steubenville, and it drew strength from eucharistic adoration, she said.

When she went, as a sophomore, to a discernment retreat at St. Francis Convent, the community’s devotion to perpetual adoration “was the primary draw,” she recalled, along with the joyful “family spirit” she experienced in the sisters’ daily lives, which blend contemplation with apostolates such as education and healthcare.

Her endeavors in the community since entering as a postulant in 2008 have included assisting at Our Lady of Hungary School in South Bend and teaching middle school religion at St. John the Evangelist Parish in St. John, Indiana.

Bishop Rhoades, praising the sisters for excellence in teaching, health care and parish service, said in his homily that their commitment to communion with Jesus in the Blessed Sacrament is key to their flourishing, as envisioned by their foundress, Mother Maria Theresia Bonzel, who was beatified in 2013. He called this “the No. 1 reason” why the Sisters of St. Francis of Perpetual Adoration continue to attract vocations among young people.

Sister Benedicta said her discernment had always incorporated eucharistic adoration: she feels inseparable from receiving Jesus as her spouse. “The constant availability of Jesus in a heart-to-heart way really attracted me” to the community in Mishawaka, she said. She was also inspired by a faithfulness to Jesus that persisted through the most difficult times — the same degree of faith that the Blessed Mother demonstrated when her son was dying on the cross in front of her and St. Teresa “Benedicta” of the Cross affirmed in her name, which meant she was “blessed” by the cross.

Recognizing the strong role Mary has played in her vocation journey, Sister Benedicta noted that the Annunciation, the day when the Angel Gabriel called Mary “blessed among women” and conveyed her vocation, is her name day. The “M” initial in the names taken by every Sister of St. Francis of Perpetual Adoration stands for Mary.

The message of love that endures suffering has formed her from her childhood days, Sister Benedicta recalled. All four of her grandparents had lived in Hungary and had undergone persecution for their faith during World War II. One grandfather had been condemned to die, but his life was saved when the actions of a Catholic religious brother, also held captive, prompted a judge to change his decision from the death sentence to imprisonment for the grandfather. The brother, however, was killed.

As Bishop Rhoades remarked about total receptivity to God’s calling, “It’s a beautiful paradox: The more we give ourselves, the more we find ourselves.”