NOTRE DAME — A beloved Sister of the Holy Cross and namesake of the Sister Maura Brannick Health Center passed away Oct. 18 in South Bend.

Mary Louise Brannick was born Feb. 8, 1923, in Joliet, Illinois, but grew up on a small farm in Minooka, Illinois, 56 miles southwest of Chicago. Her parents, Ellen “Nell” Conroy and Charles “Charley” Brannick, worked hard and never sat idly by when they saw others in need during the hardships of the Great Depression.

“There were lots of people worse off than we were. I was just blessed with a family that cared for other people, even strangers, as much as we cared for each other,” Sister Maura had said.

She initially delayed her arrival at the motherhouse until February 1943, after her brother Joseph had been drafted for military service during World War II. Upon reception of the habit six months later she received her religious name, Maura, Irish for Mary.

Sister Maura spent time either seated for her nursing studies or more time standing at bedsides, graduating as a registered nurse from Saint Mary’s Hospital School of Nursing, Cairo, Illinois, in 1948.

While still involved in pastoral care at St. Joseph, she received full support as outreach coordinator to visit the sick and elderly in their homes in a part of South Bend where many Polish and Hungarian immigrants lived and worked. “They needed basic health care assistance. My dream was a neighborhood clinic,” she said.

Eventually Sister Maura had the blessing for a clinic to provide basic, preventive services for those without access to Medicaid, Medicare or private insurance. St. Joseph Regional Medical Center sponsored the initial West Washington Street Health Center in October 1986. 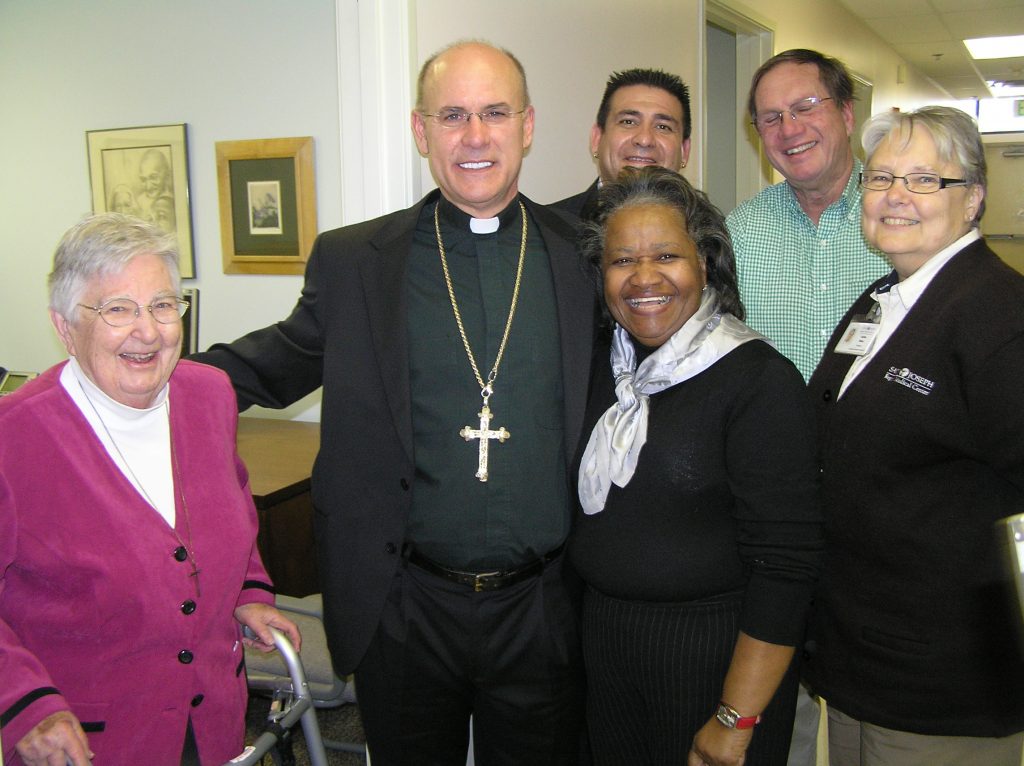 Before long Sister Maura said, “I found myself sitting on the steps of the staircase to conduct an interview with a volunteer,” because the clinic was too small. In February 1988 it relocated to a new site known as South Chapin Street Health Center with the support of the medical center, medical volunteers, sisters and other local volunteers, and major donors. The current center was dedicated in December 1998 and in October 2006 was renamed The Sister Maura Brannick Health Center. The area now largely consists of Hispanic Latino, African American and Caucasian residents.

The older woman was known to invite many a discouraged young sister or new nurse to take a walk with her or to sit and talk. Her calm counsel instilled confidence in them that all would be well.

She was 85 when she retired in 2008 at a ceremony in her honor in the lobby of St. Joseph Regional Medical Center. Someone provided her a comfortable chair near the podium so that Sister Maura could conserve her energy. One of the attendees noted that, “With her sweet disarming smile she looked as if she were holding court.”

“I am on my way to God,” Sister Maura said to one of the sisters visiting her at Rosary Convent in recent months. Nearing death, she felt at peace, describing her prayer as wordless “sitting in the lap of God.”

Sister Maura died on the morning of the feast of St. Luke, patron saint of those who minister in health care.