“It always seemed to be full of sadness,” she told the crowd of more than 500 who gathered April 14 at St. Michael Church, part of Holy Cross Parish in Sioux City.” Then, I saw how it was a beautiful connecting point between God and us,” she said. “He was no longer the ‘unapproachable’ God, but the God who suffered and died for us.”

The award-winning vocalist presented “I Thirst: The Crucifixion Story,” on Palm Sunday, reinforcing the passion and death of Jesus evoked from the Gospel reading from Luke for that day. Cameron, who performed at the foot of the sanctuary, turned and gestured toward the larger-than-life crucifix above the altar.” When I look at the crucifix, I see myself suffering, too,” she mused. “I realized it’s OK to be afraid and ask, ‘Why, God, did you abandon me?’”

By age 19, Cameron was a pop superstar in Croatia.

“Yes, my image was even made into a doll,” she told The Catholic Globe, Sioux City’s diocesan newspaper. “I had everything — clothes, a chauffeured limousine — yet I was empty.”

A powerful encounter with God two years later compelled her to abruptly step away from her fame and embark on a spiritual journey that took her to the United States at age 21.

Despite her deep faith and powerful music ministry, Cameron struggled through years of depression, severe anxiety and panic attacks. Her healing came through years of contemplative prayer, inner work and action. 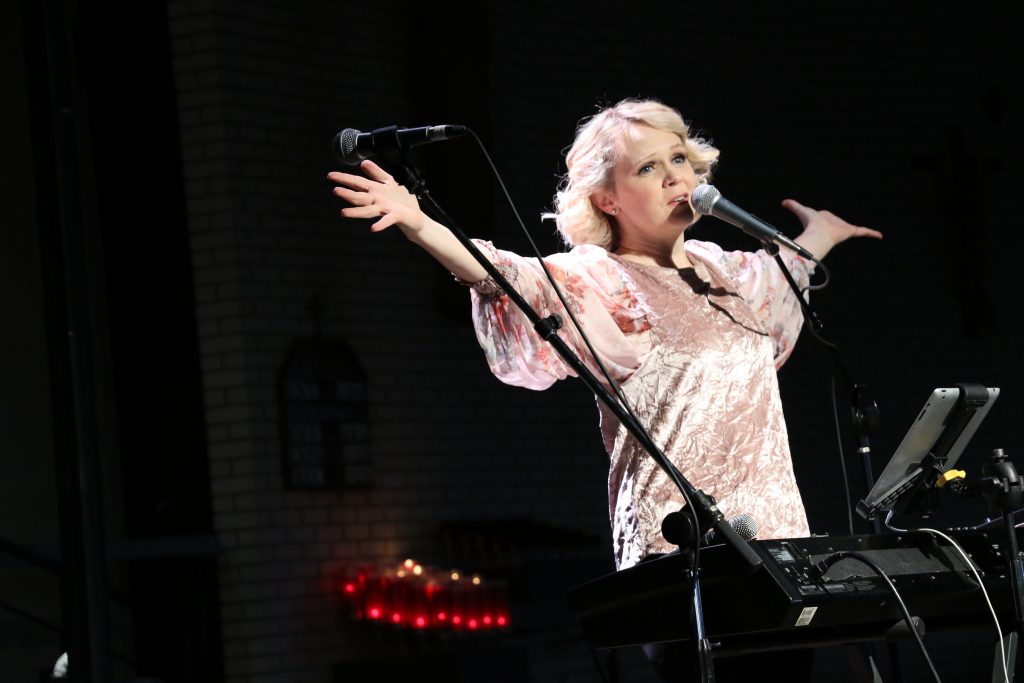 Soon after getting married in 1999, Cameron, along with her husband, Matthew, embarked on what turned into a 15-year tour of America, during which she performed more than 1,000 “I Do Believe” concerts.

“It was this deeper conversion that helped me through the most difficult time of my life,” she said. “That was my husband’s diagnosis of and eventual death from cancer in 2017.”

“I started doing missions out in Alhambra, California, at the Carmelite Sisters in Orange County,” he said. “Tajci and I ended up doing a few concerts together, and when I connected with her recently in Nashville, I invited her to perform at Holy Cross.”

Father Hemann pointed out the concert was not a “social evening,” but an evening of prayer.

“I have kept the Blessed Sacrament in the tabernacle,” he said. “My prayer is that this evening deepens our relationship with the Father, Son and Holy Spirit, mending, healing and bringing wholeness to us.”

The singer-songwriter interspersed the Crucifixion message with music, Scripture and insights about her life. Cameron’s hands alternately glided over and pounded at the keyboard to evoke different responses to her vocals.

Her blond hair practically glowed in the semi-darkness of the church. The upper range of her vocal register was as strong as Celine Dion’s, and her occasional vibrato suggested Patsy Cline. A particularly moving moment was when she sang a cappella to “O Sacred Head Surrounded.”

“Jesus didn’t die to change God’s mind about us,” she said. “Jesus died to change our minds about God, and the biggest sin we can commit is a refusal of accepting God’s love.”

Cameron stretched out her hands, like Christ on the cross, several times during the concert to emphasize songs or discernments on Scripture.

When she was in her late teens, a best friend brought her to church, and on her 21st birthday, Cameron discovered God was calling her to a different vocation.

“I told him I would go wherever he would lead me,” she said.

“I felt something I had never felt before,” Cameron said, then spread her arms wide open. “I experienced a love that loved me, and I wanted to live in that love.”

Emotions overwhelmed the vocalist twice. She invited the audience to join her in “Were You There (When They Crucified My Lord?)” and ceased accompanying them on the final verse to wipe away tears. Cameron’s soaring vocals on “You Raise Me Up” concluded with a few more tears from the vocalist.

“That’s why I believe this journey (of life) is worth taking,” she told the crowd. “I am excited, grateful and blessed to be here tonight.”

Cameron lives in Nashville, Tennessee, with her three sons. She volunteers with Better Decisions, mentoring female inmates at a state prison in Nashville. She also serves as a board member of Nashville Peacemakers, an organization that works with at-risk youth in Nashville’s low-income neighborhoods and as a presenter with EndSlaveryTN, which raises awareness of human trafficking while working toward preventing it and providing healing for those affected by it.

Joanne Fox is managing editor of The Catholic Globe, newspaper of the Diocese of Sioux City.