EMMITSBURG, Md. (CNS) — The faded black bonnet with its gently ruffled frill once framed the face of the nation’s first American-born saint.

The black cap, a familiar sight in portraits of St. Elizabeth Ann Seton, rested in a gray archival box back in Emmitsburg March 11 for the first time since 1822.

It is one of several rarely seen artifacts from Mother Seton’s life now on display for all visitors to see at the National Shrine of St. Elizabeth Ann Seton.

The “Seton Family Treasures” exhibit officially opened July 1 at the shrine. The exhibit is part of a yearlong commemoration to mark the 200th anniversary of the death of America’s first native-born saint. She died at age 46 Jan. 4, 1821. 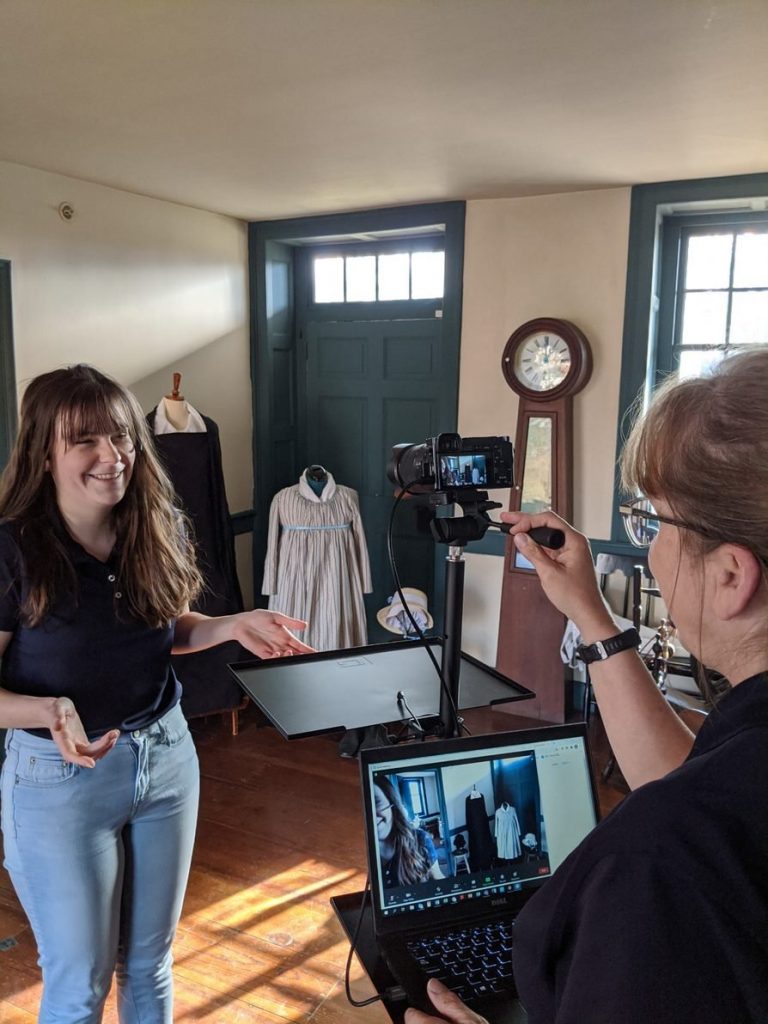 The items — including St. Elizabeth Ann’s rosary, her wedding brooch and her daughter’s christening gown — arrived in early March, donated by the Sisters of Charity of New York to the Maryland shrine for their display and preservation.

The items, mostly objects of daily life, will be used to talk about her diverse life experiences, Judge said. She knew the joys and trials of family life, was faced with financial struggle, confronted death and found solace in the Catholic Church.

“She was fully human like all of us,” Judge said in a March interview. “It gives people great hope and great faith.”

“When visitors see these artifacts, they will be taken back in time, while being made mindful of their own experiences and struggles that often mirror those of America’s saint,” Judge said in a statement just prior to the exhibit’s July 1 opening.

The exhibit debuted with a virtual tour of it led by historian Catherine O’Donnell, whose book “Elizabeth Seton America’s Saint” is considered the definitive historical account of Mother Seton’s life. A special morning Mass, “Pray for America with Mother Seton,” will be said July 4 at the shrine’s basilica in honor of the saint and the opening of the exhibit.

Among the donated artifacts are:

— St. Elizabeth Ann’s black cap, sent to New York in 1822, a year after Mother Seton’s death, and conserved about six years ago, according to Mindy Gordon, archivist for the sisters in New York.

— A delicate brooch in the shape of a bow with a chrysanthemum-like flower at its center, which she wore on her wedding day; her portable writing desk.

— The Civil War-era commissioning certificate and epaulettes of her grandson, William Seton Jr.; and the christening dress St. Elizabeth Ann sewed for her daughter Catherine.

Only a few items were displayed March 11, after they arrived at the shrine. The christening dress needs special care to be shown due to its fragility, while other artifacts, including the wedding portraits and family photo albums, need further restoration before the exhibition, according to Scott Keefer, archivist for the Daughters of Charity.

“We’re so very pleased that these artifacts have found not only a safe but a loving home,” said Sister Donna Dodge, president of the Sisters of Charity of New York. She was joined by other members of the order’s executive council via Zoom.

Several artifacts, including the tea chest and commissioning certificate, were donated to the sisters in New York upon the death of the saint’s great-grandson and last living descendant, Ferdinand Jevons, of New York.

The commissioning certificate recalls a moment of special significance to the sisters. Capt. William Seton III, the saint’s grandson, was wounded at the Battle of Antietam 30 miles from Emmitsburg. Sisters of Charity nursed him back to health at St. Joseph’s Military Hospital in New York. Only when he awoke did the sisters realize he was the grandson of their foundress.

“How powerful a moment that must have been,” Judge said

Elizabeth Ann Bayley was born in New York City Aug. 28, 1774, to a prominent Episcopal family. In 1794, at age 19, Elizabeth married William Magee Seton, a wealthy businessman with whom she had five children. William died of tuberculosis in 1803, leaving Elizabeth a young widow.

After discovering Catholicism in Italy, where her husband had died, Elizabeth returned to the United States and entered the Catholic Church in 1805 in New York.

To support her family, she started an academy for young ladies in New York but later relocated to Baltimore, where she established the first Catholic school. She was the founder of what would become the Catholic school system in the United States.

In 1809, she moved her school to nearby Emmitsburg, establishing it on land purchased by a donor. A year later she founded what became known as the Daughters of Charity. She died Jan. 4, 1821. She was canonized by St. Paul VI Sept. 14, 1975.

Preparing for the transfer of the saint’s items from New York, Gordon discovered something she’d never seen before on the backs of 1794 wedding miniatures. “I had never touched them,” she said.

She found a braid of Mother Seton’s hair on the back of her miniature and a velvet cloth embroidered with her husband’s initials on the back of his. One of the canisters inside the tea chest still contains tea, enough for a cup or two.

In March, before the artifacts were introduced, Father Ted Trinko blessed them. A priest of the Institute of the Incarnate Word, he is the shrine’s chaplain.

“In many ways, these relics are going to bless us,” he said.

Despite the coronavirus pandemic, the national shrine has continued virtual programs and tours and is open for visitors with face masks and social distancing, said Tony DiIulio, programs director. Some 60,000 people visit the shrine every year, though numbers were down about 10% last year.

Commemorations also include a new film, “Seeker to Saint,” as well as virtual and in-person exhibitions and tours.

Mount St. Mary’s University in Emmitsburg also contributed to the exhibit, which joins an already extensive collection of Seton artifacts at the shrine’s museum.

Editor’s Note: For more details about the artifacts or to see the film, go to https://seton200years.org. The shrine also is releasing a series of four videos about different aspects of her life as “a wife, mother, friend, teacher, spiritual seeker and servant of the poor.” The first two videos can be seen at https://setonshrine.org/seeker-to-saint.

Tilghman writes for the Catholic Review, the news outlet of the Archdiocese of Baltimore.