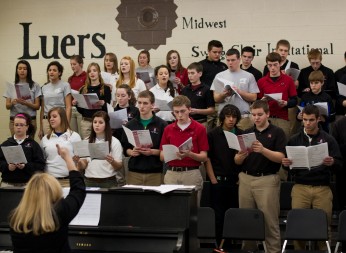 In 1975, Franciscan Father Fred Link, who directed the Bishop Luers Minstrels show choir and would later become principal of the Fort Wayne high school, was the founder of the Luers Midwest Show Choir Invitational. It consisted of seven area show choirs or swing choirs as they were called then. One judge commented, “You have a tiger by the tail.”

What made the Bishop Luers Show Choir Invitational unique was “it was organizing an educational opportunity with educated adjudicators (judges) who would come in and really help the groups and give them pointers on how to become better and what to do and to bring groups from different areas together,” said Karlene Krouse, the director of the Bishop Luers Minstrels show choir since 1999. Prior to the Luers’ invitational, Krouse recalled most competitions were at community festivals or street fairs.

The Luers Midwest Show Choir Invitational was propelled into the national spotlight in 1976. A public television station in Bowling Green, Ohio, WBGU-TV, taped the show and made it available to PBS stations across the U.S. In 1985, the public television program was aired throughout the former Soviet Union.

The invitational is now made available worldwide on the Web. Visitors to www.bishopluers.org can watch the Friday and Saturday competitions by clicking on “Luers Live” tab and then signing onto the live broadcast feed in partnership with Incommand Broadcasting. The fee is $5 for the Friday program and $10 for Saturday competitions.

A middle school competition on the evening of March 4 will include three local public schools and a show choir from St. Joseph-St. Elizabeth School in Fort Wayne.

At the Luers invitational, “every student is recognized from an educational standpoint on their performance ability,” Krouse said.

Krouse believes that “Glee” has increased the popularity of show choir, “but the sad part about the show, it does not show the hard work that goes behind the scenes to get to the performance level that these students do.”
“It doesn’t show how (the students) are juggling two sports, all their academics, their (Advance Placement) courses and really the nuts and bolts of a show choir.”

The show choir practices three or four times a week, four to eight hours per week, and when the season is over, they continue to practice once a week.

“You find with students getting involved with show choir that it’s a lot of work, but it’s not any more work than being in a sport,” Krouse commented.

For a school of 540 students, the show choir boasts an illustrious history. Last year, the show choir took a sixth-place national listing and ranks in the top 23 this year.

One of the most rewarding things about show choir students, Krouse said, is seeing an individual transform from a student who was quiet and shy into a positive, confident performer and “has the best time.”

As a show choir parent, as well as a director, Monica Zwick said, “I like the camaraderie you have with a lot of parents — a lot more than with the sports.”

Parents take the roles of feeding the show choir students during competitions, helping with costumes, hair, makeup, loading the trucks for competitions and manning booths at school and community fundraisers. Many parents have assigned tasks for the upcoming invitational as well.

“It is a great, great opportunity for parents and students to be working together,” Krouse noted. “And I think it is great because students also see their parents in a volunteer role in something that they love. I think that’s one thing about Bishop Luers, that we really give a great example to these young men and women of service to our community.”

“We’re not only just a little show choir,” Krouse said, “because every time we sing we are expanding out into the community whether it’s at a Mass — we know that most of the show choir members are in liturgical choir — or at a competition.”

Zwick spoke of how the Catholic identity was prevalent last year when they performed at a competition outside of Fort Wayne and made the night show. “A couple of parents got together and found a Catholic church three blocks away and a lot of the kids went to Mass between the day show and the night show,” Zwick said. “The priest at the parish asked the students to come everyday because, ‘we hadn’t had this much singing in a long time.’”