This past Saturday, September 23rd, I was privileged to concelebrate the Mass of Beatification of Father Stanley Rother at the Cox Convention Center in Oklahoma City. Over 17,000 people attended the celebration, filling the Center to overflowing. Two priests of our diocese, Father Craig Borchard and Father Dennis DiBenedetto, also concelebrated the Mass. Dan Koehl, one of our diocesan seminarians, also participated and sang with the beautiful schola from Mount Saint Mary’s Seminary. Father Stanley, ordained a priest in 1963, was an alumnus of the Mount. I was happy to run into many Mount alumni who came to Oklahoma City for the Beatification. 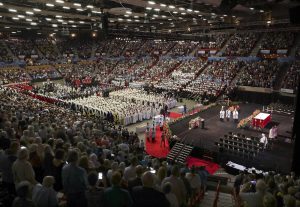 An overflow crowd estimated at 20,000 attended the beatification Mass for Father Stanley Rother Sept. 23 at Oklahoma City’s Cox Convention Center. Blessed Rother, a priest of the Oklahoma City Archdiocese, was murdered in 1981 in the Guatemalan village where he ministered. (CNS photo/Dave Crenshaw, Eastern Oklahoma Catholic)

Father Stanley Rother is the first U.S.-born priest to be beatified. He is also the first U.S.-born martyr to be beatified. We can now call this beloved priest Blessed Stanley Rother. It was a moment of great joy when the celebrant of the Beatification Mass, Cardinal Angelo Amato, the Prefect of the Congregation for the Causes of Saints and Representative of Pope Francis, read the Apostolic Letter from the Holy Father declaring Father Stanley “Blessed.”

Pope Francis stated in his letter that, by virtue of his Apostolic Authority, “Stanley Francis Rother, Diocesan Priest and Martyr, who was driven by a deeply-rooted faith and a profound union with God, and by the arduous duty to spread the Word of God in missionary lands, faithfully living his priestly and missionary service until his martyrdom, should henceforth be called Blessed…”.

After the reading of the Apostolic Letter, and the unveiling of a beautiful and large image of Father Stanley, the congregation erupted in applause. I noticed the image of Mount Saint Mary’s Seminary in the upper left hand corner of the banner. It seemed very appropriate since it was at the Mount that Father Stanley received the good formation that led to his living such a devoted priestly life.

“An Oklahoma farm boy, Stanley Francis Rother was born March 27, 1935, in Okarche. Ordained a priest for what was then the Diocese of Oklahoma City and Tulsa, he served in the diocese’s mission in Guatemala for 13 years. Seeking justice in the midst of a protracted civil war, Father Rother fought courageously for the well-being of his people in combating a culture that was excessively hostile to the Catholic Church.

The oldest of four children born to Franz and Gertrude Rother, Father Rother grew up in Okarche and attended Holy Trinity Catholic Church and School. He worked hard doing the required chores, attended school, played sports, was an altar server and enjoyed the activities associated with growing up in a small town.

While in high school, he began to discern the possibility of a vocation to the priesthood. He was accepted as a seminarian at a seminary in Texas. More practical than academic by nature, young Stanley struggled with Latin, which at the time was a critical requirement since the entire curriculum was being taught in Latin. Due to his difficulties, he was asked to leave the seminary as his grades were inadequate.

He sought the counsel of Bishop Victor Reed. It was decided that Stanley would be allowed a second chance, enrolling at Mount Saint Mary’s Seminary in Emmitsburg, Maryland. He was ordained a priest on May 25, 1963. Father Rother served as an associate pastor for five years in Oklahoma. Heeding the call of Pope John XXIII, he sought and received permission to join the staff at the diocese’s mission in Santiago Atitlan, Guatemala.

Father Rother’s connection with the people of Santiago Atitlan was immediate. He served the native tribe of the Tz’utujil, who are descendants of the Mayans. He not only learned both Spanish and the Tz’utujil language, but his working knowledge of Tz’utujil enabled him to help translate the New Testament.

As the years passed, Father Rother tried to live a simpler life to be in communion with his people. He was surrounded by extreme poverty, with the Tz’utujil living in one-room huts and growing what they could on their small plots of land. Father Rother ministered to his parishioners in their homes; eating with them, visiting the sick and aiding them with medical problems. He even put his farming skills to use by helping them in the fields, bringing in different crops, and building an irrigation system.

While he served in Guatemala a civil war raged between the militarist government forces and the guerrillas, with the Catholic Church caught in the middle. During this conflict, thousands of Catholics were killed. For a time, the violence was contained in the cities, but it soon came to the highlands and Santiago Atitlan. Catechists began to disappear, people slept in the church for protection and death lists began to circulate in the towns.

Eventually, Father Rother’s name appeared on a death list. For his safety and that of his associate, Father Rother returned to Oklahoma, but he didn’t stay long. He was determined to give his life completely to his people, stating that ‘the shepherd cannot run.’ He returned to Santiago Atitlan. Early on the morning of July 28, three men entered the rectory, fought with Father Rother and then executed him. His death shocked the Catholic world. No one was ever held responsible.

The people of Santiago Atitlan mourned the loss of their leader and friend. Because of the affection and veneration that the people of Santiago Atitlan displayed for their priest, they requested that Father Rother’s heart be kept in Guatemala, where it remains enshrined today. His body was returned to his family in Oklahoma for burial. In 2007, his Cause for Canonization was opened. On December 2, 2016, Pope Francis officially recognized Father Rother as a martyr for the faith.”

Father Stanley’s brother Tom, who continued the operation of the family farm, and his sister Marita, a Precious Blood religious, were in attendance at the Beatification Mass. I wondered how amazing it must have been for them to see their big brother beatified.

I have been inspired for many years by the life and martyrdom of Father Stanley Rother. I believe that he is a wonderful example for our priests of zeal and closeness to the people. Blessed Stanley Rother is also a great inspiration for all of us of fidelity to the Gospel of Jesus. Let us pray that one day he will be canonized a saint. I leave you with the new prayer that was the Collect at the Mass of Beatification:

“O God, who gave your priest Blessed Stanley the heart of a pastor and the fidelity of a martyr, grant, through his intercession, that the humble flock may reach where the brave Shepherd has gone before. Who lives and reigns with you in the unity of the Holy Spirit, one God, for ever and ever. Amen.”