In the fall of 2021, St. Therese Parish in Fort Wayne hosted a presentation by NAMI, the National Alliance on Mental Illness. As attendees mingled together afterwards, the conversation took an unexpected yet divinely-inspired turn.

“We had a gentleman who was actually talking about his situation, and for me, it was a very emotional testimony from him,” said Linda Thomas, a parishioner at St. Therese. “I said, ‘So what as a church could we do for you?’” 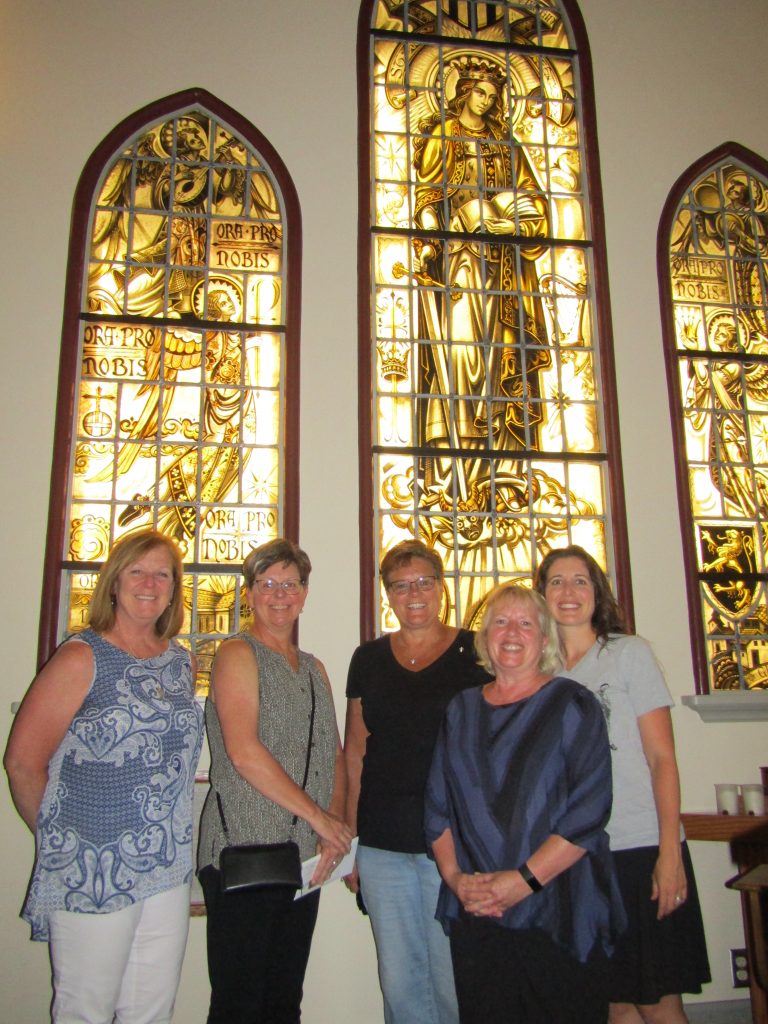 Eric Peat
Five of the women who began St. Dymphna’s Refuge pose together below a stained-glass image of St. Dymphna at the saint’s National Shrine in Massillon, OH.

From that question emerged St. Dymphna’s Refuge, a mental health peer support group beginning on Sept. 19 at St. Therese. The group’s mission is to provide a space in which people can share their mental health experiences, be assured of their value as members of the Church community, and be rooted in Christ. Six women of the parish – Thomas, Elaine Cooper, Kris Lill, Lisa Palmer, Amy Carsten, and Kayla Peat – formed the nucleus of the ministry and have since been trained as facilitators. St. Therese is one of a handful of parishes in the Diocese of Fort Wayne-South Bend to offer such a ministry, helping address mental health with a spiritual approach that’s aligned with the teachings of the Church.

“Hospitals have programs, but there aren’t very many churches that would take this on,” said Cooper. “This isn’t an easy thing to be able to promote and be a part of and understand and facilitate. I think being church-based is very helpful.”

“This is what NAMI wants to happen,” added Lill. “They’re trying to get more churches involved with supporting people with mental health problems, and churches are natural places people turn to for support. They want someone to pray with them.”

That prayerful support is exactly what these women envisioned when they conceived the initial idea. Once the concept began to develop and take shape, it was presented to the St. Therese Parish Council for approval. That is when the Lord took over. 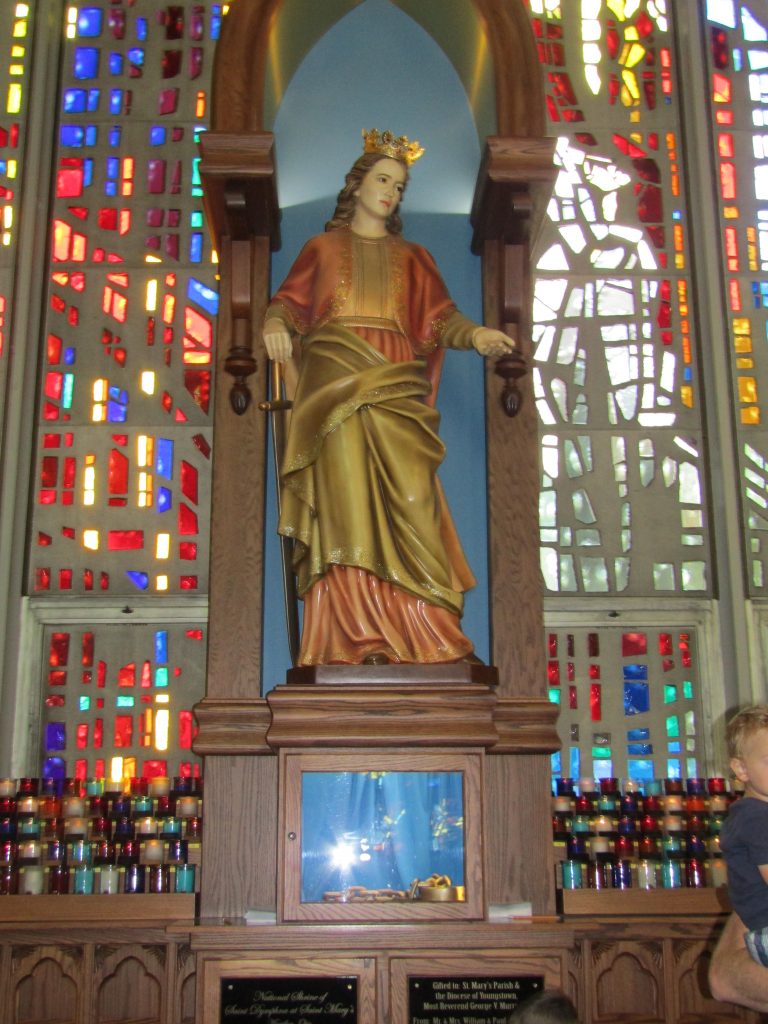 Kayla Peat
A statue of St. Dymphna, patron saint of those struggling with mental illness, is on display at the National Shrine of St. Dymphna in Massillon, OH.

“After we got permission and started working on it, we were praying and researching, and we just felt led by the Holy Spirit,” said Peat. “Every time we got together and had an idea, it seemed like the resources were just laid at our feet. We just had to pick them up and run with them.”

These resources included training materials from NAMI, Formed, and Mental Health America, which enabled the group to participate in formal instruction as facilitators. They have also received assistance and direction from Catholic Charities and other diocesan figures. Most importantly, the group has benefitted from the encouragement and prayer of the clergy at St. Therese. Father Matthew Coonan and Father Keeton Lockwood (who has since been reassigned to St. Michael in Plymouth) were instrumental in starting the ministry and supporting its formation. Thomas said all of these resources were effective in preparing the group for the road ahead. 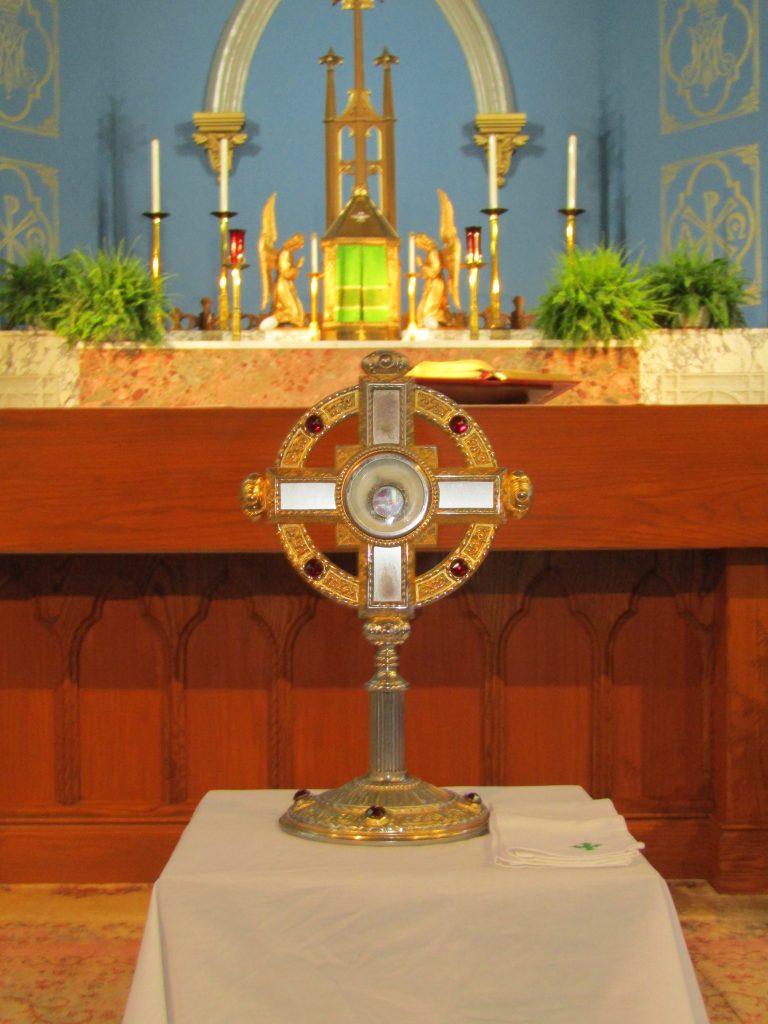 Kayla Peat
A first-class relic of St. Dymphna, patron saint of those struggling with mental illness, is on display at the National Shrine.

“I thought the episodes on Formed that we were asked to watch were really helpful for me,” said Thomas. “In one episode, it did stress that when we have someone we are speaking to, what really works is if you bring faith, hope, and love into the situation, which are theological virtues of our faith.”

Next came the task of naming the group. The women turned to St. Dymphna, an Irish virgin and martyr from the seventh century who is recognized by the Catholic Church as the patron saint of those suffering with mental illnesses. “She’s a holy card on my refrigerator and has been there for many years,” remarked Cooper, who decided to “introduce” her to the group. However, they all got to know her on a deeper level in July by taking a pilgrimage to the National Shrine of St. Dymphna, located inside St. Mary’s Catholic Church in Massillon, Ohio. Father Lockwood arranged a one-day bus trip to the shrine and extended the invitation to parishioners of St. Therese and beyond.

“I had never heard of St. Dymphna, so it definitely brought it all real for me,” said Palmer. “It was very awesome to see, and spiritually it really struck me.”

“To make a pilgrimage there with so many others and to share that experience with other people was huge,” explained Lill. “But also, to learn about how the shrine started, how it originated in a mental health facility – that was fascinating.”

St. Dymphna’s Refuge now hopes to bring the saint’s love and mercy to anyone in need, regardless of religious background or affiliation. Meetings are free to attend and are designed to allow those struggling with mental illness or caring for such individuals to share their own mental health experiences. Team members will offer a prayerful listening ear and can direct attendees to educational resources and mental health service agencies as needed. They do not function as mental health professionals and cannot give therapeutic advice, prescribe medication, or make medical diagnoses. The ultimate vision, according to the group’s facilitators, is to provide a spiritual base for those suffering from mental illness – one that brings peace to the broken, reminds the suffering that they are valuable and loved, and removes the stigma of talking about mental health.

“I think the biggest thing that you find is that if you talk about it, it doesn’t necessarily solve it and it doesn’t go away, but it helps,” said Palmer. “Someone else might have a similar situation, and you realize you’re not alone. It could be a huge load off them just to be able to freely talk about it. They can express it in a safe, spiritual atmosphere where they won’t be made fun of or judged.”

And regardless of what God has in store for St. Dymphna’s Refuge, the experience has already had a positive impact on the six women who formed the ministry.

“Forming our group of facilitators has already been bearing fruit in our lives,” said Peat. “It’s helped us see the purpose in our sufferings. It’s a beautiful moment in time when we get to see some of the ways that God uses our sufferings for good.”

St. Dymphna’s Refuge will meet at St. Therese on the third Monday of each month at 6:30 p.m. No sign-up is required, but those with additional questions may contact the parish office at 260-747-9139. 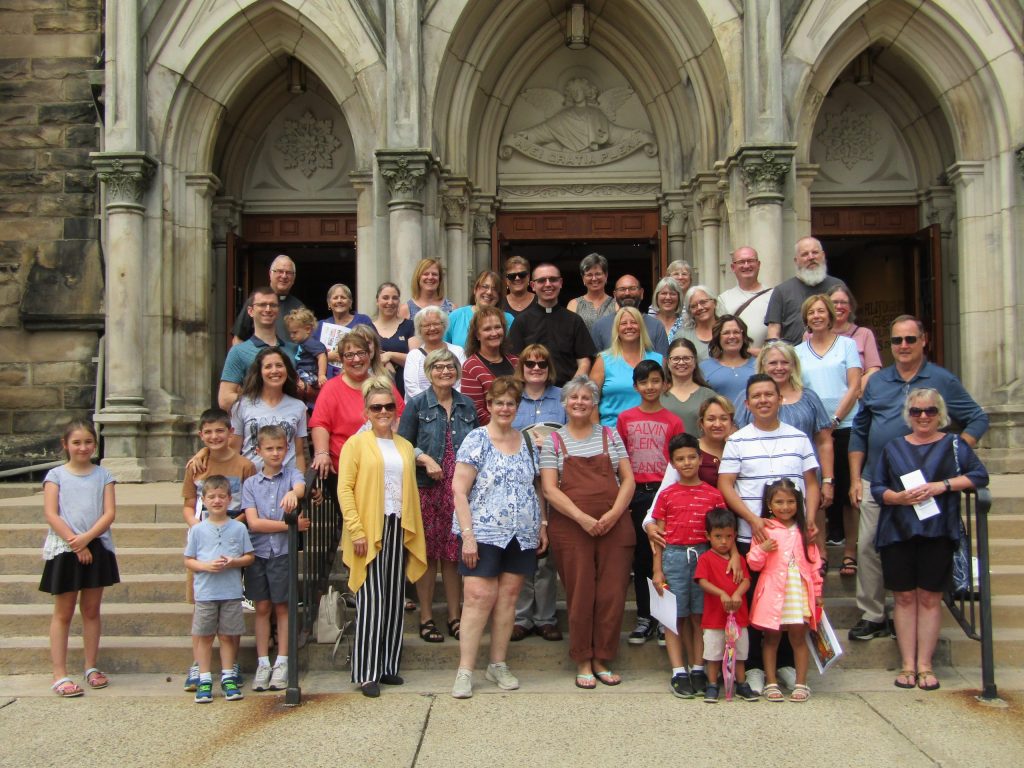 Provided by Eric Peat
Father Keeton Lockwood (center) led a group of St. Therese, Fort Wayne parishioners on a pilgrimage to the National Shrine of St. Dymphna in Massillon, OH.