According to the National Autism Association autism is the fastest-growing developmental disorder, with one in 54 children diagnosed with it. Autism is often accompanied by sensory processing disorder, which can cause overstimulation to the affected person when lights are too bright, sounds are too loud or things happen unexpectedly.

The sensory-friendly Mass addresses some of those reactions, and the practice is growing within the Diocese of Fort Wayne-South Bend. St. Vincent de Paul Parish in Fort Wayne recently began hosting a special Sunday afternoon Mass dedicated to meeting this need.

Father Jay Horning is one of the parish’s parochial vicars and was appointed interim pastor while Father Daniel Scheidt went on sabbatical during the fall. Father Horning had already been considering reinstituting a Sunday afternoon Mass when parishioner Sarah Olson approached him about the possibility of a sensory-friendly Mass, so he chose to “give it a distinct purpose,” he stated.

Olson is the mother of nine children, one of whom – John – has autism and two others who were born deaf and now have cochlear implants. “We’ve always been on this journey, this search for how we can have a big family, go to Mass together and have our son with us and our other children and be part of the Mass,” she said. 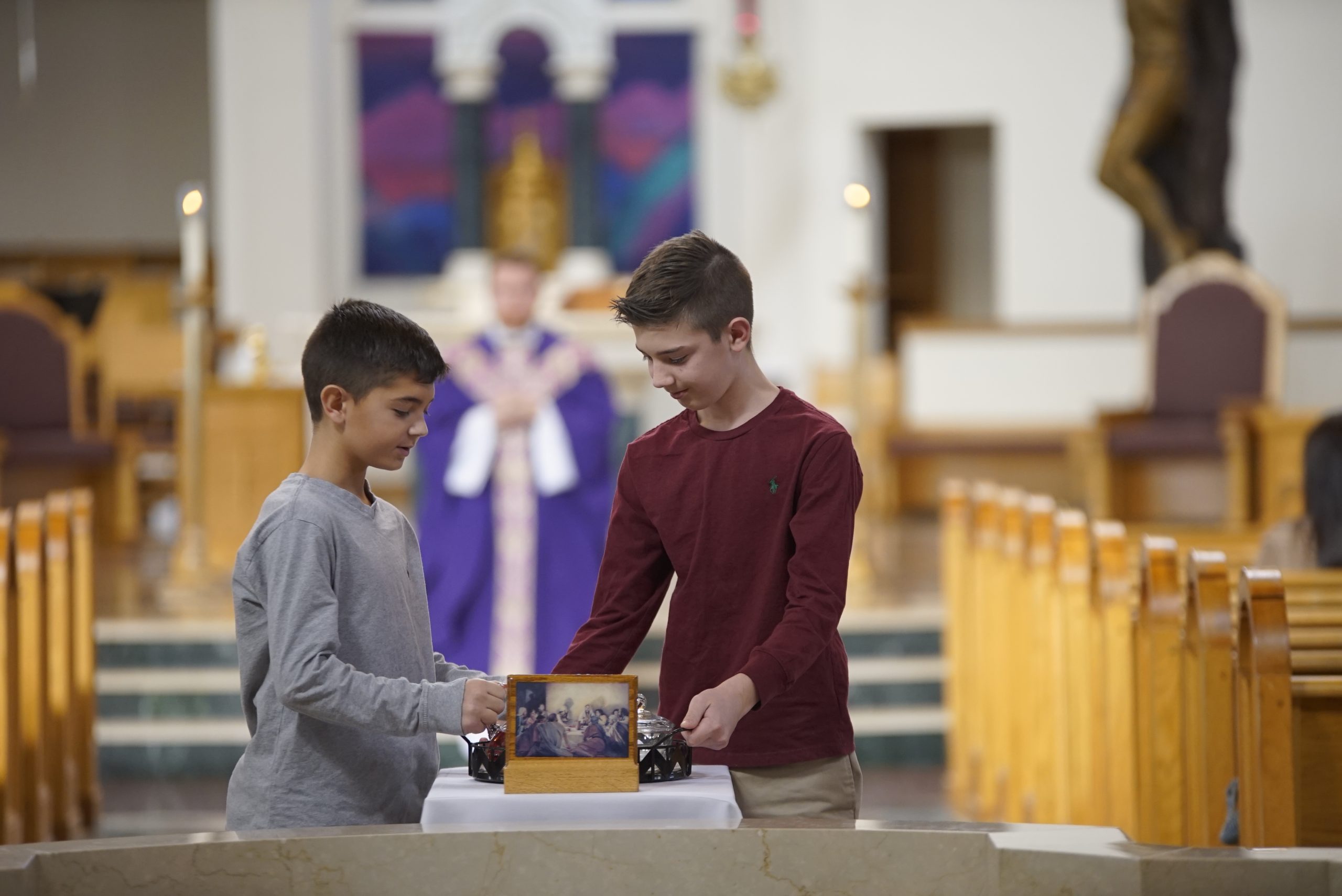 Photos by Jennifer Barton
Patrick and John Olson take up the gifts at the sensory-friendly Mass at St. Vincent de Paul Parish in Fort Wayne Nov. 28. Their mother, Sarah, worked with Father Jay Horning to institute the special Mass to meet the needs of people who have disabilities.

Two years ago, Olson quit her job to stay home and focus on advocating for her special needs children. In learning how to meet her kids’ physical and spiritual needs, she turned to the diocese for assistance, sending emails to various departments asking what resources were available. This led her to the Belonging ministry and a meeting with Allison Sturm, ministry specialist in pastoral care for the diocese.

In that meeting, Olson asked if a sensory-friendly Mass that meets a family’s Sunday obligation could be celebrated. She decided to approach her pastor about it.

Father Horning took it to prayer and to his staff and began discussing what the parish would need to do to move forward. He expressed his hope that offering the special Mass will encourage those who may be nervous about returning to church for any reason to come back. “We need to be at Mass,” he reiterated.

Olson admitted she was terribly nervous to ask for something from her priest but felt called to do so. And since she was asking something of her pastor, she knew she needed to give of herself, too. Now she serves as sacristan and has reached out to others to find lectors, extraordinary ministers and people to fill other roles – all of which she said was “completely out of my comfort zone … I’m not this person at all. But it’s been so good; It has been humbling and wonderful, really. You never know where God is going to end up taking you.”

Sensory-friendly Masses were developed to help people with autism – like John – to feel they are still a part of the body of Christ, even if they cannot attend a typical Mass. To meet the needs of people with disabilities, a sensory-friendly Mass is much shorter at around half an hour, with no music, calm lighting and a short and simple homily. The overall atmosphere is meant to reduce the anxiety of those who attend, which allows families like the Olsons to concentrate on the eucharistic celebration. 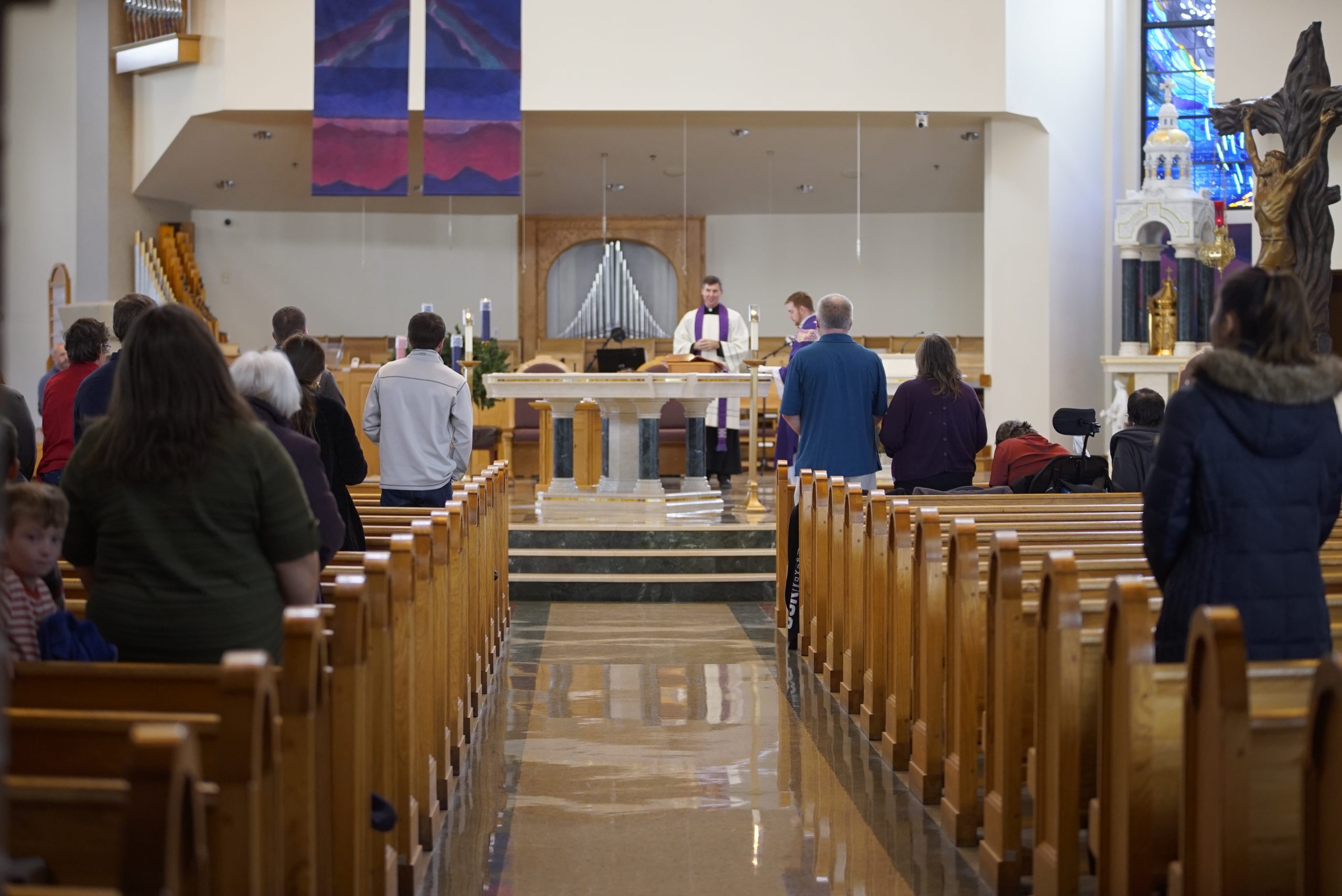 Accommodations are made at sensory-friendly Masses for people in wheelchairs, those with hearing loss, anxiety and various other developmental disorders.

At the beginning of each Mass, Father Horning reminds those present that the Mass is meant to be inclusive to people of all abilities and that any seemingly unusual movements, noises or behaviors on the part of worshippers are perfectly normal and acceptable. For those who cannot come up to the front of the church for communion, Father Horning asks that they notify him so communion can be brought to them.

The sensory-friendly Mass is not only meant for those with disorders like autism or Tourette’s syndrome, but for anyone who has need of it. People in wheelchairs, older people with restricted driving hours and families with young children can find a home at the 1:30 p.m. Mass. Attendees are also encouraged to participate in whatever capacity they are able. Olson would love to see John serve at that Mass with the aid of his older brother.

The sensory-friendly Mass, Father Horning stated, “answers the need for people who otherwise might not feel welcome.” And between the numbers of children diagnosed with autism every year, rising cases of mental illness and other special needs, the Church has found ways of becoming more inclusive to people that might otherwise have felt neglected.

Since St. Vincent began hosting the sensory-friendly Masses, the number of worshippers has grown. Sturm reported around 60 people attended the first two Masses: then it grew to 80, then nearly 100 people, both parishioners of St. Vincent and members of other parishes nearby.

Olson would like to see the idea of offering a sensory-friendly Mass spread to other parishes in the diocese, and she hopes more people from the area will attend the St. Vincent Mass. Whatever happens in the future, she said that “hopefully we brought some families back into the Church, we allowed some other families to feel the love and warm embrace of … just what the community of Christ is, and being surrounded by that love and support.”

Part of the blessing of the sensory-friendly Mass is that it promotes acceptance of those with disabilities within the community.

“In my mind, I’m excited if people show up who don’t have anyone with special needs. If they see families or people at other Masses that they’ve seen at this Mass, maybe they’ll be more accepting and welcoming” to them, Olson commented.