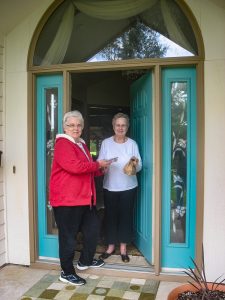 Theresa Gannon delivers a hot lunch to a resident on her and her husband Paul’s Homebound Meals route in Fort Wayne. — Photos by Vince LaBarbera

The words “Neither snow nor rain nor heat nor gloom of night stays these couriers from the swift completion of their appointed rounds” have long been associated with the American mail carrier. But they also could apply to Paul and Theresa Gannon, and many other volunteers whose “mail” is meals to seniors and homebound residents in the Fort Wayne area.

The Gannons have been members of St. Therese Parish for 47 years, and are volunteers by nature. Both are extraordinary ministers of holy Communion: She serves at Mass and he takes Communion to nearby Kingston Residence monthly for those viewing the diocesan Sunday televised Mass. Theresa also volunteers at Kingston, assisting with a monthly birthday party. In addition, Paul serves the St. Vincent de Paul Society at St. Therese.

In addition to all the work they do at their home parish, the Gannons are also volunteers with Homebound Meals Inc., Fort Wayne, delivering hot, nutritional meals weekly to clients who, due to age, illness or disability, cannot provide adequate meals for themselves.

“When I got ready to retire from Parkview IT six years ago, I thought about what I might want to do to avoid becoming a couch potato,” said Paul. After seeing an HBM ad in the newspaper, he called and eventually rode along on a route with another driver to see if he would like it. 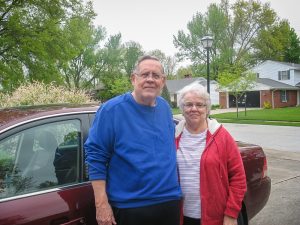 Paul and Theresa Gannon have been delivering hot lunches from Homebound Meals and visiting with clients in the Fort Wayne area for more than six years.

He did enjoy it, so he drove the route by himself for about six months before asking his wife, Theresa, if she would like to accompany him.

Usually, he drives and she takes the meals to each client. The Gannons currently make their deliveries before noon to about 12 individuals — driving nearly 20 miles — and usually briefly visit with each person as well. “Often, we’re the only ones people see each week. Sometimes you get very close to a few individuals,” said Theresa. “They get to know our names and even the names of our family, and we get to know them.” The couple has switched roles on occasion, once when Paul broke his wrist and couldn’t drive. He still goes by himself occasionally, when they’re babysitting a grandchild.

If someone is not home, the resident places a cooler near the door to contain the meal. “If no one answers the door we’re provided with phone numbers for the resident, a relative or neighbor nearby to call — as well as for the Homebound Meals downtown office,” said Paul.

HBM, a member of the Meals on Wheels Association of America, does not receive government funding but depends upon financial and volunteer support.

“The name Meals on Wheels often is used generically to refer to home-delivered meals programs, not all of which are actually named ‘Meals on Wheels,’” explained Theresa.

According to HBM’s website, Meals on Wheels originated in Great Britain during the Blitz in World War II, when many people lost their homes and therefore the ability to cook their own food. The Women’s Volunteer Service for Civil Defense, (WVS, later WRVS), provided food for them. The name “Meals on Wheels” derived from the WVS’s related activity of bringing meals to servicemen. The concept of delivering meals to those unable to prepare their own evolved into the modern programs.

The Gannons explained that drivers pick up two coolers: one with hot food and one with cold. A clipboard is provided, giving directions to clients’ homes. There are no more than 12 clients on each route. Currently, the Gannons are visiting seven residences. The time required to run a route rarely is more than an hour and a half, they said. “If you use the coolers, they have to be returned to the pickup location,” said Paul, “so we use our own.” Volunteers drive their own vehicle, usually just once a week.

“Homebound Meals is a good program, and something worthwhile that can be done by volunteers without spending taxpayer dollars,” said Paul. “But it is a commitment,” he added, “and not something we can shirk on a Thursday because we don’t feel like going.”