The University of Saint Francis, Fort Wayne, will host the seventh annual Cupertino Classic basketball game Monday, Dec. 27. The game comes after the 2020 installment was cancelled due to COVID-19. The priests, who won the 2019 Cupertino Classic at Marian High School, Mishawaka, will attempt to hamper their seminarian competitors and start a winning streak at the matchup this Christmas season.

Seminarian Samuel Martinez said that the key to obstructing the priestly strategy is to “thwart the brothers Coonan,” referring to Father Matthew Coonan and Father Terrence Coonan.

“There’s a lot of different strategies. With the priests winning last year, I think a lot of it comes down to not getting ‘out intensity-ed’ by the Coonan brothers. So that’s definitely No. 1, we’ve got to watch out for those two.”

But besides that,” he continued, “I don’t know. We’ve got our, kind of like ‘star-studded’ roster this year. It will be interesting to see. I think they’ll do fine on their own — a lot of these guys have good basketball experience and good whereabouts in that regard.” 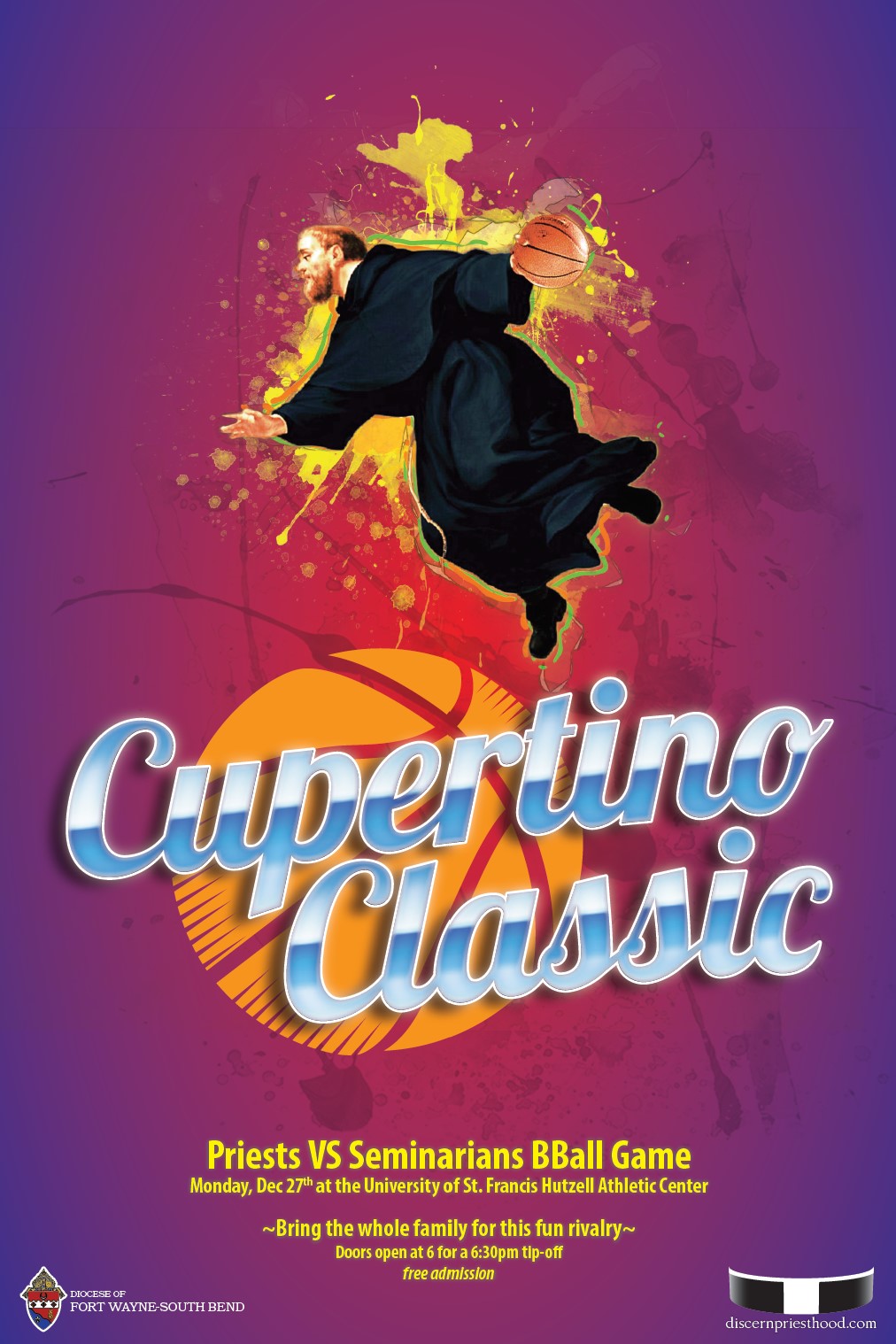 To prepare for the game, the seminarians have been hard at work practicing and narrowing their roster.

“We were trying to figure out the rosters because we actually, just this past week, started our practices. But we’ve brought it down to, I think, seven guys.”

He added that, in the past, the game has brought around 1,200 fans to the stands. The seventh annual Cupertino Classic marks the first time that the University of Saint Francis has hosted the event, and Martinez said he expects around 2,000 spectators to watch the battle.

“We’re hoping to fill all the stands, have all the floor seating taken and everything too. And with, of course, having the Mass ahead of time, the holy hour, and then having all sorts of fun booths and different things like that for the vocations office and stuff, there’s going to be a lot going on.”

Mass will be celebrated in the university chapel at 3:45 p.m. prior to the game. Following the conclusion of Mass, eucharistic adoration will be offered in the chapel until the Hutzell Center doors open at 6 p.m.

Although the basketball game will take center stage that evening, its purpose is to call attention to vocations.

“As usual, Cupertino itself is a game we’re using to raise awareness about vocations. It’s not like it’s a big fundraiser or anything like that, it’s really just to bring the diocese together to see the seminarians and priests competing in a good, competitive event,” said Martinez.

“It’s going to be great, being able to say, ‘hey, come support your vocations but at the same time realize that we’re all here because of Christ,’ and just leading into it with that. That’s going to be cool. I’m excited about that.”

Organizers named the Cupertino Classic for St. Joseph of Cupertino, a 17th-century Franciscan monk who was known to levitate when in prayer, especially when Christmas carols were sung at Mass.

Of course, the choice of St. Joseph of Cupertino as the patron saint of this annual basketball game is particularly fitting, as many Catholics will sing Christmas carols in anticipation and celebration of the coming of the Messiah — and because the players may pray for His intercession to levitate over their opponents.

“Just keep all of us in your prayers. It’s the biggest thing,” said Martinez.

The Cupertino Classic is an event for everyone in the diocese to come together for camaraderie and fellowship, and to rejoice during the Christmas season over their shared Catholic faith.

For more information on the game, find “Cupertino Classic” on Facebook, Twitter and Instagram or visit diocesefwsb.org/cupertino. Entry is free and open to all. The diocese will accept freewill offerings to support the education and formation of its seminarians during the game, or any time online at osvonlinegiving.com/224/DirectDonate/20449.