As the final seconds ticked off the clock and both sides embraced at midcourt, two things were abundantly clear: we are blessed beyond measure to have our parish priests, and the future of religious vocations in the Diocese of Fort Wayne-South Bend is bright.

More photos from the event.

The eighth installment of the Cupertino Classic, which pits our diocesan priests versus seminarians on the basketball court, was held on Dec. 27 at Saint Joseph High School in South Bend. Named after a 17th century friar who was known for levitating during prayer, the game has become an annual tradition and a favorite among both clergy and laity. It’s also a night that puts the spotlight on vocations to the priesthood and religious life, while bringing people together from across the diocese to support those who have said yes to God’s call.

“The Church in the diocese is the people of God, and this game draws us together,” remarked Father Drew Curry after the game. “We get together for a lot of Masses, a lot of school activities, but this is a great way to see the priests just kind of hanging loose and being with each other and trying to show some of their remaining basketball skills.”

The evening began with Mass in the school chapel, followed by adoration up until the 6:30 p.m. tipoff. Family, friends, and parishioners alike began filing into the stands to cheer on their favorite priests and seminarians. Father Andrew Budzinski, Vocations Director for the diocese, led those gathered in an opening prayer. Then Father Brian Isenbarger and Sister Zelie Marie Warrell of the Sisters of St. Francis of Perpetual Adoration, who would both provide comedic commentary over the PA throughout the game, announced the starting lineups for the opening tip. 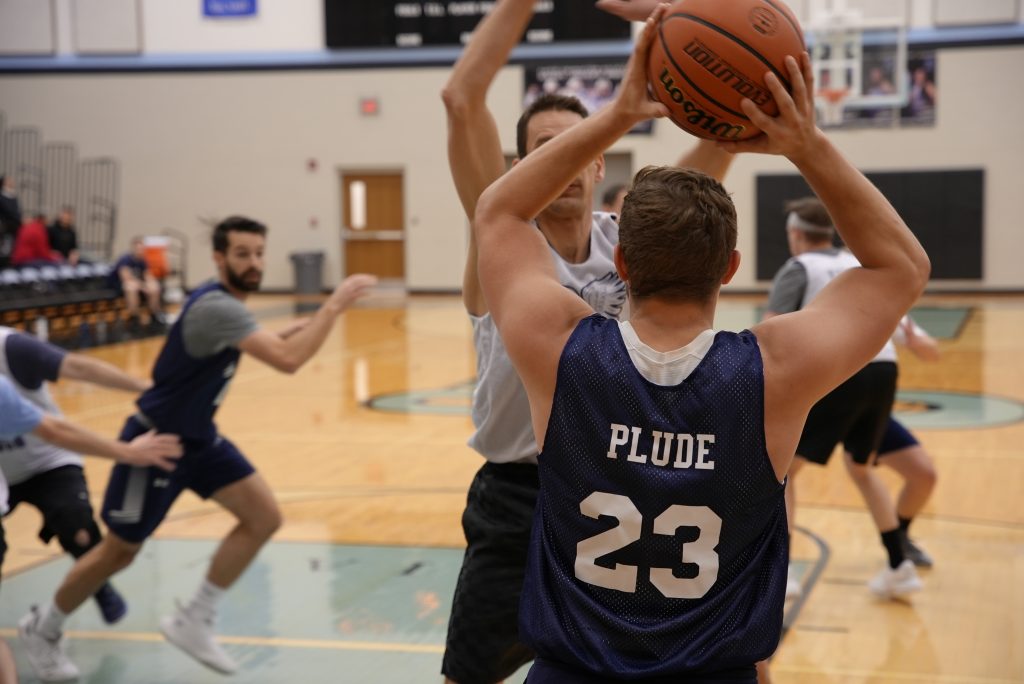 Photos and Video by Eric Peat
Father Matthew Coonan attempts to defend against seminarian Eric Plude as the priests try to gain a lead over the seminarians at the Cupertino Classic in South Bend on Tuesday, Dec. 27.

With both youth and hardcourt experience on their side, the Seminarians established an early edge in the contest and led 10-6 after the first quarter. However, both teams began finding their groove in the second quarter, and the Seminarian lead was just 23-17 at the halftime break, as the priests looked primed to challenge their consecrated comrades down the stretch.

“We knew it was going to be a tough game,” said seminarian Greenan Sullivan. “The Cupertino’s always a tough game — physical, everybody knows each other, everybody knows each other’s moves. So, props to the priests, but I’ve got to give my guys a shout out; they came out ready to play. We had a short game plan assembled together before the game, and we executed fairly well.”

This game plan, according to Sullivan, consisted of outrebounding the priests on both ends of the court and playing a fast brand of basketball. The priests responded with intensity and physicality, diving on the floor for loose balls and not shying away from contact when taking the ball inside the lane. They used this hard-nosed approach to their advantage, tying the game at 25-25 midway through the third quarter on a layup by Father Ben Landrigan.

However, that was as close as the priests would get. The seminarians outscored the priests 21-10 the rest of the way, icing the game with a number of drives to the hoop by Sullivan. Playing on his home floor, the former Saint Joseph standout and collegiate player at Ave Maria University put on a show, finishing with a game-high 21 points on 10-of-18 shooting, while adding 11 rebounds and 3 assists. He got plenty of help from Deacon Brian Florin, who also recorded a double-double with 11 points and a game-high 12 boards. Andy Barnes (8 points), Deacon Jake Schneider (4 points), and Eric Plude (2 points) rounded out the scoring for the seminarians.

Although the seminarians walked away with a 46-35 victory — their fourth win in five tries, knotting the all-time series at 4-4 — Sullivan was quick to commend his opponents and eventual teammates. 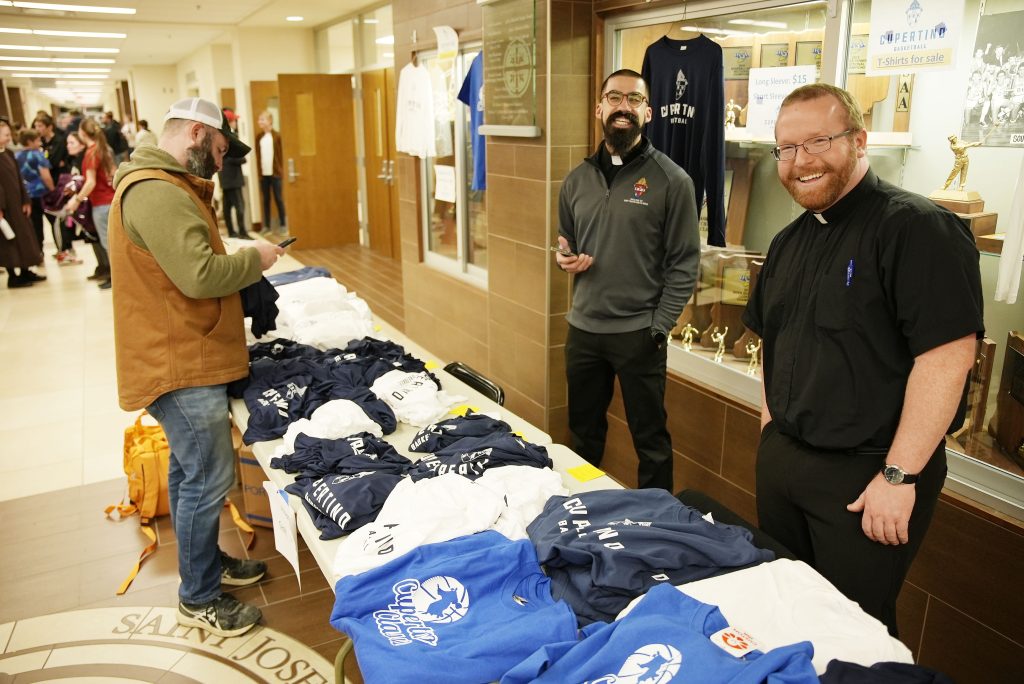 “They’re our brothers in Christ,” said Sullivan. “They’re our fathers spiritually. We look up to them; we’re trying to be them. But on the court, we’re still able to have the friendly intense competition, which I think is good to show the guys — especially the young men in the stands — that we’re still dudes, we can still get up here and play. But at the end of the day, we’re all going to join each other in the pews and hopefully one day in the sacristy.”

For the priests, Father Landrigan led the way with a team-high 12 points, while Father Terry Coonan scored 11 and connected on all four of his free throw attempts. Father Matthew Coonan chipped in 7 points and pulled down a team-high 7 rebounds, and Father Dan Niezer added 2 points and 5 boards. However, the largest cheer of the night came when Father Drew Curry drained a deep three-pointer in the third quarter — his only bucket of the game.

“Yeah, it was really cool,” said Father Curry, giving a nod to some students from St. John Bosco parish who cheered him on with the help of some homemade cardboard cutouts of their pastor. “They’re always fun like that; they’re always bringing the party and the joy, and I appreciate that a lot. At Mass, I think people are rooting for me, but it’s a little more of a formal, liturgical experience.”

At the conclusion of the game, Father Budzinski again addressed the crowd, this time holding up the 2022-23 Diocesan seminarian poster and echoing the question printed across the top.

He then closed the night by leading the entire gymnasium in singing the Salve Regina. Much like the game itself, this song served as a unifying display of the beauty and joy of the priesthood. Sullivan’s advice to those discerning a religious vocation was a simple one: open your heart to the Lord.

“If you’re thinking about it at all, you’ve got to give God a chance. Give God the chance first, and even if you do go to seminary and it doesn’t work out, you’re going to be much better for it. Your prayer life is going to be better; your relationship with God is going to be better. If you’re a young man, that’s the primary attribute you need as a father anyway.”

Those interested in learning more about vocations to the priesthood or religions life can visit diocesefwsb.org/vocations. 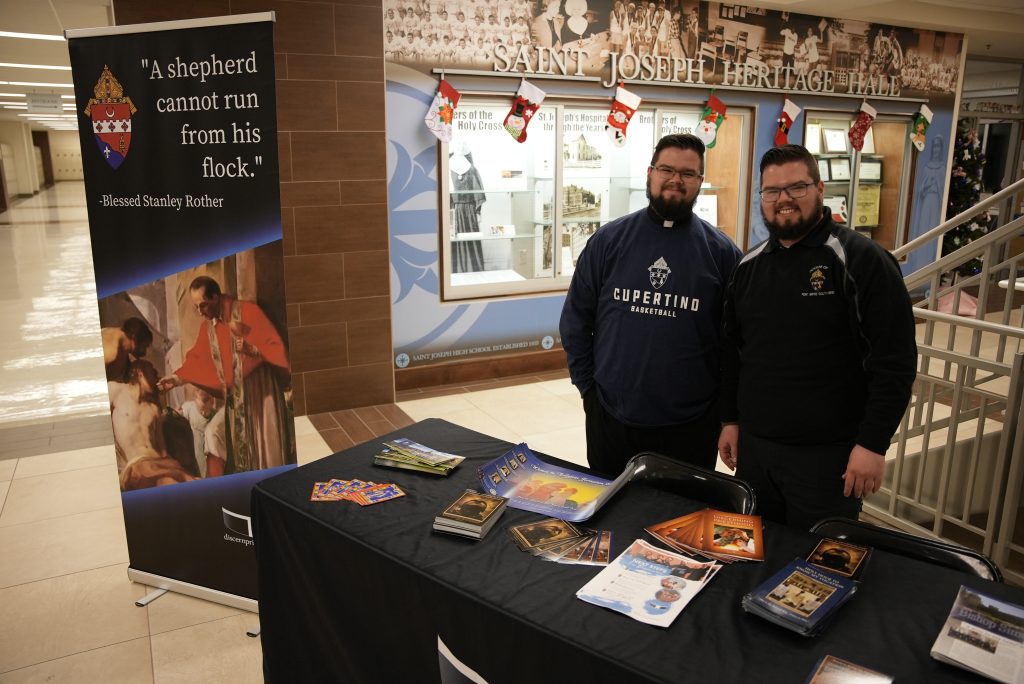