The seminarian team defeated the priests by over 20 points in the annual Cupertino Classic basketball game at the University of Saint Francis Hutzell Center Monday evening, Dec. 27. The loss spoiled chances for the priests to become back-to-back champions after winning the previous matchup in late 2019.

The 2021 installment of the battle marks the return of the tradition after its cancellation in 2020 due to the COVID-19 pandemic.

Fans from across the Diocese of Fort Wayne-South Bend showed up to root for their priests and seminarians, and they nearly filled the university’s gymnasium. Several onlookers held signs to support their favorite players. 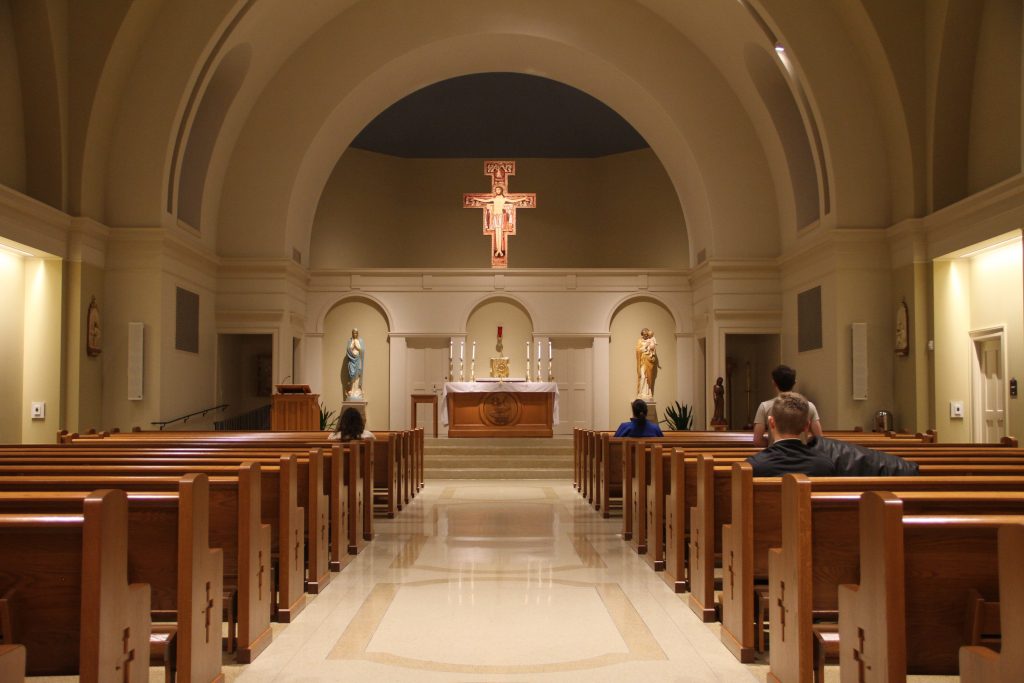 Members of the faith spend time in adoration at the Chapel of St. Francis of Assisi before the annual Cupertino Classic basketball game. — All photos by Joshua Schipper

This year also marked several firsts for the friendly competition. The University of Saint Francis hosted the event for the first time after a five-game run at diocesan high schools. The occasion also offered an opportunity for fans to celebrate Mass and worship in eucharistic adoration at the university’s chapel prior to the 6:30 p.m. tipoff.

After a few minutes of warm up shots by both teams, Father Andrew Budzinski led the pregame prayer.

Then, following the singing of the national anthem, the clash began.

As always, the priests brought several talented players to the court, including Father Terrence Coonan and Father Matthew Coonan, as well as the recently ordained Father Benjamin Landrigan, who had been a dominant player for the seminarians in years past.

The priests’ athleticism, however, was quickly outpaced by a strong showing from the opposing bench. 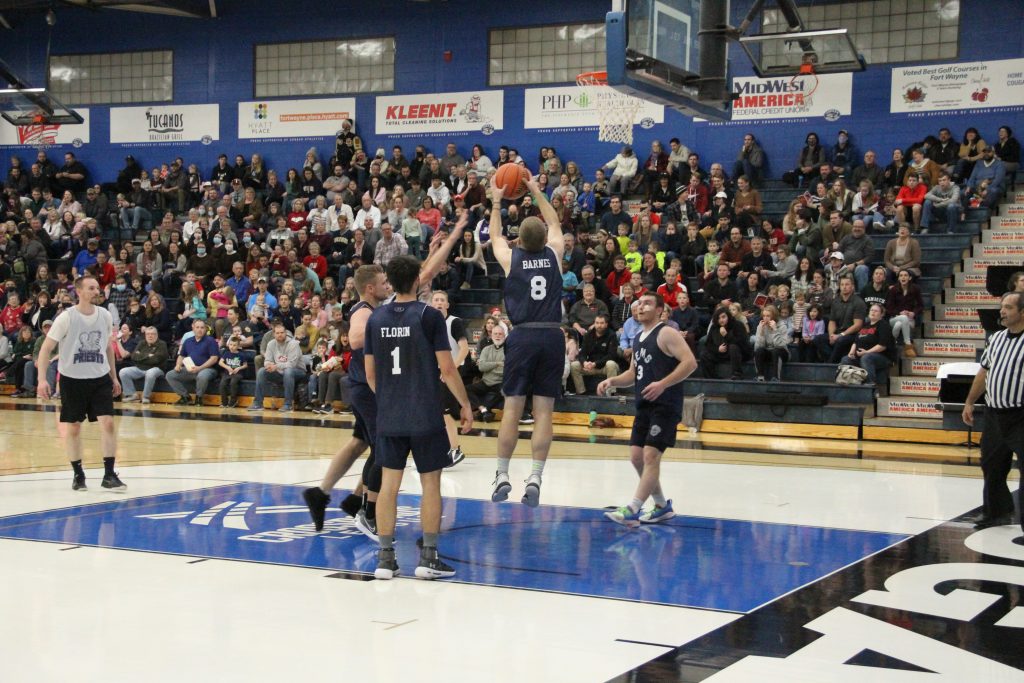 The annual Cupertino Classic basketball game between diocesan priests and seminarians in the University of Saint Francis’ Hutzell Center Dec. 27.

During halftime, several Sisters of St. Francis of Perpetual Adoration who had been cheering in the crowd played a game of knockout, which is a short, basketball-derived game. Halftime also provided the perfect opportunity for Father Stephen Felicichia, one of three commentators at the competition, to interview seminarian David Langford and Father Thomas Zehr for Redeemer Radio, which broadcast the game for those who could not make it in person.

The trend continued through the final quarter of the game as the seminarians ran away with the score.

Between the third and fourth quarters, a section of the crowd performed a rollercoaster wave, which added to the joyous and exciting camaraderie of the evening. 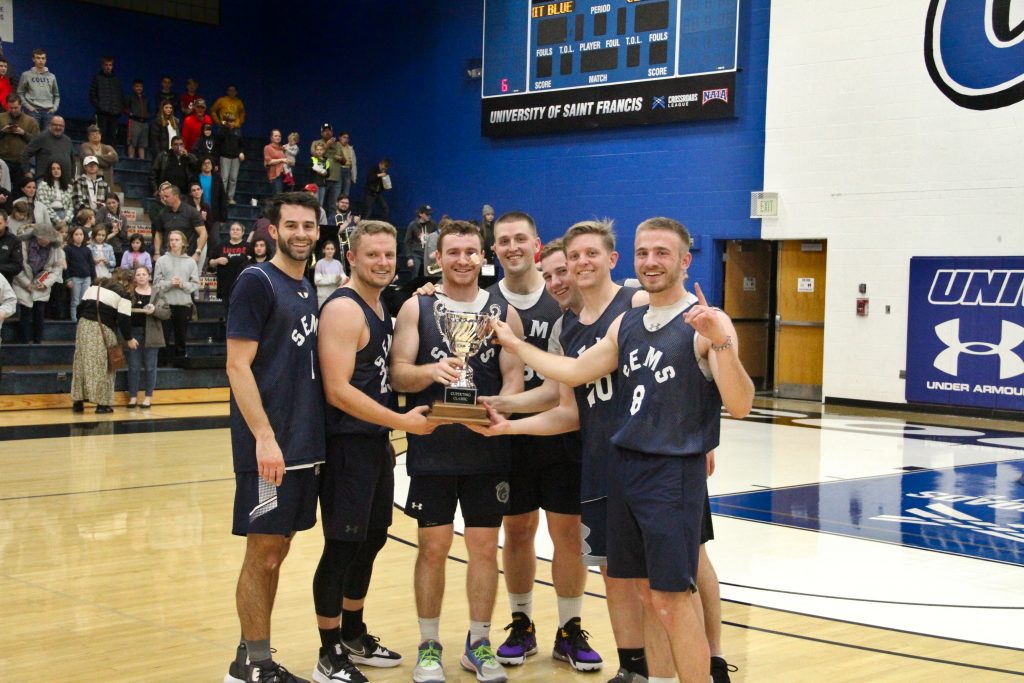 As the final quarter rolled on, the priests’ chances of staging a comeback grew evermore bleak. At the last buzzer, the seminarians had defeated their ordained brothers by a score of 55 to 34.

Before Father Budzinski presented the Cupertino Classic trophy to the seminarians, the players and crowd chanted the Salve Regina while facing an image of Our Lady of Guadalupe. 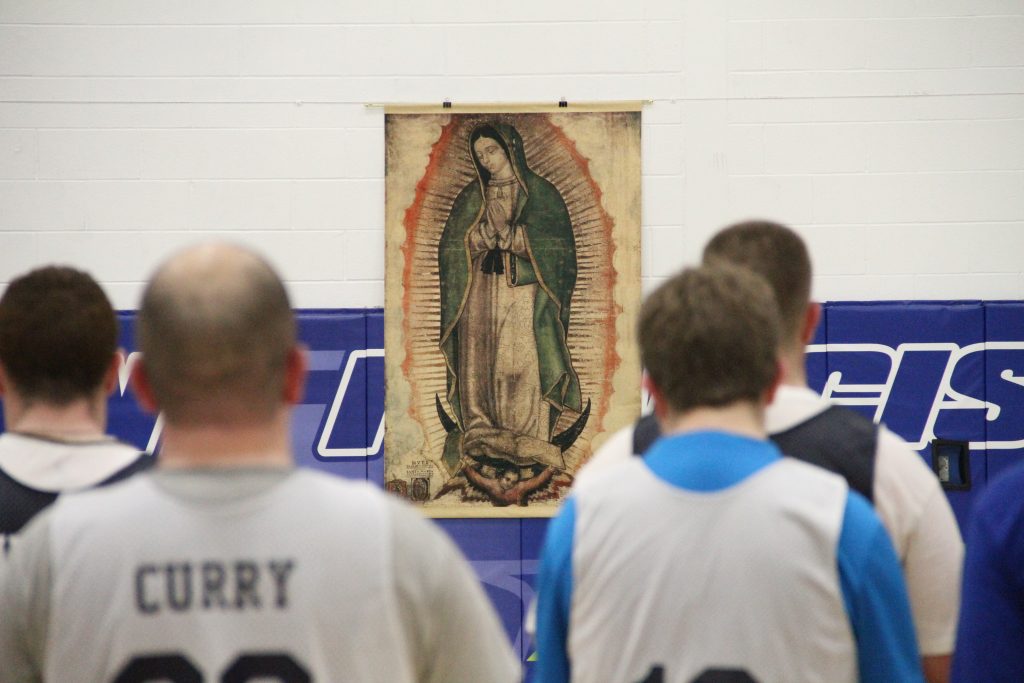 Started in 2014, the Cupertino Classic basketball game is an annual friendly competition between diocesan priests and seminarians that brings awareness to vocations to the priesthood and religious life. The game is named for St. Joseph of Cupertino, a 17th-century Franciscan monk who was known to levitate when in prayer, especially when Christmas carols were sung at Mass.

The monk is a particularly fitting patron of the Cupertino Classic. As Catholics continue to celebrate the Christmas season, they came together in community for an evening of entertainment and prayer.

And, perhaps, St. Joseph of Cupertino interceded for the seminarians Monday evening, allowing them to levitate a little higher for rebounds. 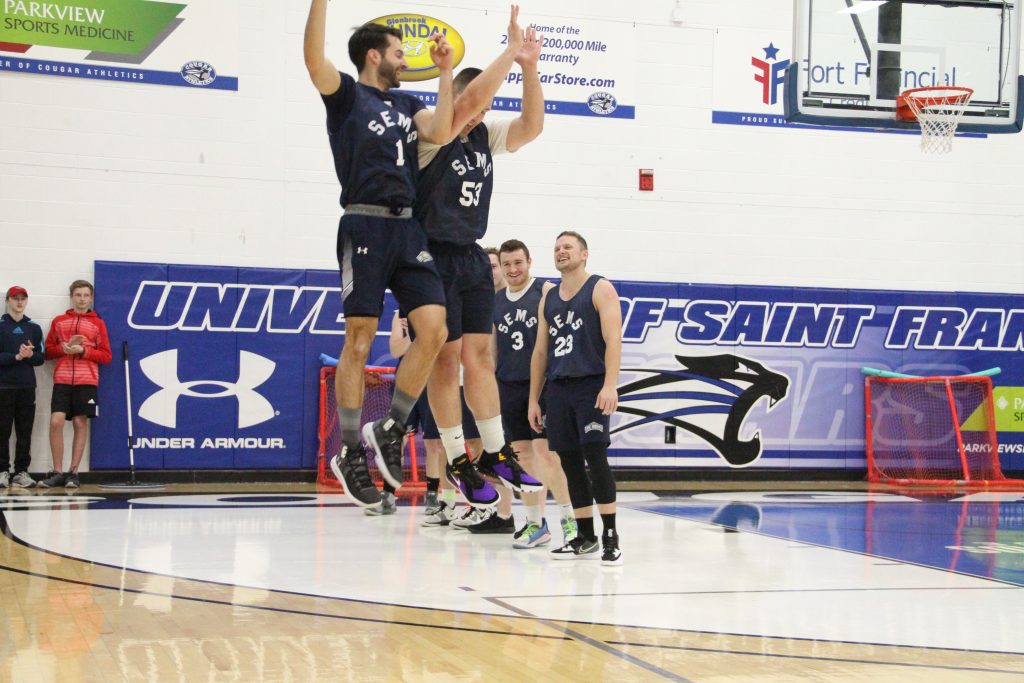 More information for those discerning priesthood or religious life can be found by visiting diocesefwsb.org/vocations.