Christmas caroling is mostly a thing of the past, a nostalgic practice of bygone days when carolers dressed in Victorian costumes and sang songs like “Good King Wenceslas.” But this year the “Christmas Caroling Seminarians,” as they call themselves, are reviving the tradition on the South Bend side of the Diocese of Fort Wayne-South Bend.

Holden Berg and Stephen Horton came up with the idea as a way to show their appreciation for the people who have supported them throughout their discernment process. “The seminarians all care about those within our home parishes and the diocese who have been a bright light in our discernment of the priesthood,” said Berg. 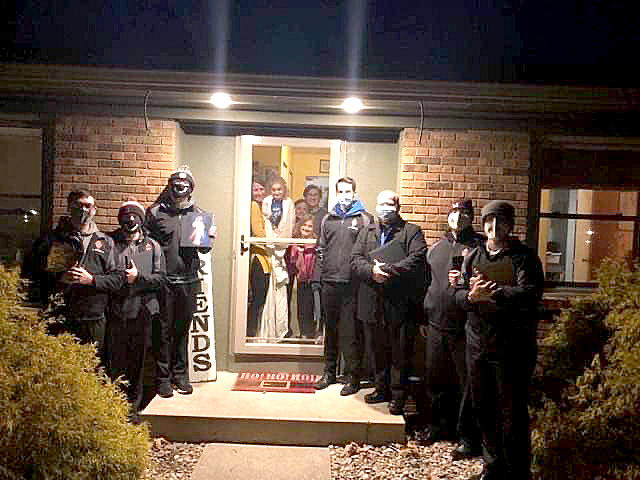 Provided by Stephen Horton
Seven South Bend-area seminarians visit with the Comeau family Dec. 2 after caroling at the family’s home. Seminarians Holden Berg and Stephen Horton came up with an idea to offer Christmas caroling this year to demonstrate their appreciation for the support members of the Catholic community have provided them during their discernment process.

The idea took root separately among the men, yet together. Horton explained: “I was actually thinking about it and told myself ‘I don’t think the guys would be into it’ … and as it was on my mind, Holden said ‘hey, what do you think about this?’”

It felt like more than a coincidence to Horton, who was reassured that the other seminarians would support the effort. “So we just kind of hashed out what it would look like from there.”

Even though they would have to split their time between final exams that took place the week after Thanksgiving and enjoying their holiday break, five other seminarians jumped on board with the plan and were anxious to lift the spirits of those disheartened by the COVID-19 pandemic. “All the seminarians on the South Bend side of the diocese are excited to participate in this Advent cheer,” Berg remarked.

Horton has a background in music, performing in choirs and bands since the third grade. Additionally, at least two of the other members of the Christmas Caroling Seminarians are musically talented. “Nick Monnin can automatically, off the top of his head, harmonize,” Horton said. “Brian Florian sang in the Mount St. Mary’s schola, and I know if I sing an upper harmony that he can just join me as well. So we’re able to add a little bit of musical complexity without necessarily a lot of extra effort.”

Though he typically refrains from singing sacred Christmas music prior to late Advent, which this year begins on Dec. 17, the selections Horton chose include a mix of the well-known secular and sacred Christmas tunes along with traditional Advent hymns. 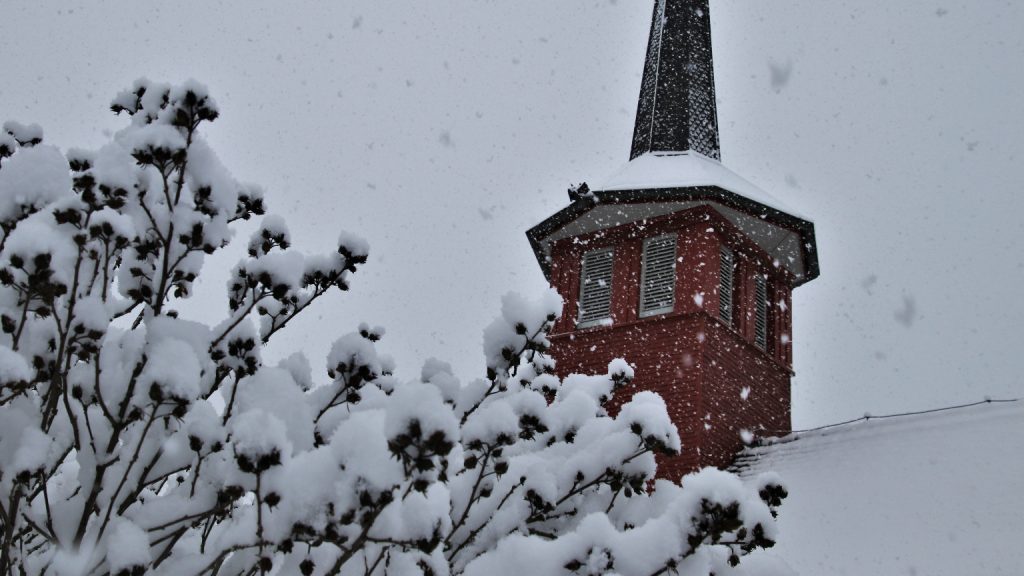 Initially, Horton explained, the group wanted to continue caroling throughout the Christmas season. To ease that time commitment, they decided instead to make their caroling rounds on specific Monday and Wednesday evenings.

“Our marketing campaign consisted of creating a nostalgic and heartwarming flyer that parishes could easily put in their bulletin or on social media,” Berg stated. An advertisement targeted the seminarians’ home parishes of St. Matthew Cathedral, St. Anthony de Padua and St. Jude in South Bend; St. Monica in Mishawaka; and St. Pius X in Granger. Berg is a member of St. Pius X and Horton is from St. Monica, both of which placed the ad in their bulletins asking interested parishioners to call the church office to request a caroling appointment.

St. Monica parish secretary Katie Rohrer reported that parishioners responded well. She scheduled several of the seminarians’ engagements, including their final stop of the first night — pastor Father Jacob Meyer’s residence, where he would provide them with dinner.

One of the first locations set to experience the musical stylings of the Christmas Caroling Seminarians was a local nursing home. The stop was especially meaningful for Horton, who declared he has a deep love for the elderly residents.

Going into the first round of caroling, the organizers had no idea how their audience would react. After the first successful night, Horton was pleased to say that “I could not have planned for it to go so well … People were ecstatic.” He was saddened that some of the nursing home residents for whom they had been scheduled to sing were not at their windows, but the seminarians performed anyway and others came to their windows to watch and listen instead. For him, the highlight of the evening was when they arrived at the home of woman who relies on a wheelchair for mobility and hasn’t been to church in some time, though she said she has been considering returning. A friend had arranged for the caroling. When the woman’s husband opened the door to the surprise, the woman began crying.

Berg also feels strongly about the blessing he is able to give to the people who have given so much to him and whose kindness he feels deeply.

“This is a gift back to the diocese and specifically the people whom we are privileged to love in this life, hopefully — specifically — as priests.”

Another aspect of the initiative that Berg and Horton appreciate has nothing to do with singing, however. It has been the collaboration between the two. Horton credits their “utter complementarity and set of skills” in bringing it all together. While Berg, who is more analytical, handled the organizational and logistical details, Horton brought musical experience to the table.

In a year with little to no singing praise to God in churches, Horton said: “I think everyone right now is thirsting to sing. Everyone just feels singing-deprived.” In the small town he grew up in he went caroling and has also done so a time or two with the St. Monica choir, but this time a little different.

“I think for me as a seminarian, it’s this opportunity to meet the people of God who you know are praying for you, who you’re going to have the delight of getting to know in the future. And even if you’re never assigned to their parish, as we pray for the Church, these are the people who may one day be Catholics in my diocese. My goal will be to serve them with my life.”

In fleshing out their plans, the men are evaluating whether caroling could become a yearly tradition for them and whether it could develop in the Fort Wayne area, too. “Coming away from the first night, it really is a low amount of effort for a high amount of return,” Horton stated. He feels “pretty resolute to continue in the years to come.”

The Christmas Caroling Seminarians have several more evenings of caroling scheduled, making the old custom new again and spreading Christmas joy to those they love.