Bishop Dwenger High School, Fort Wayne, hosted the fifth annual Cupertino Classic basketball game Thursday, Dec. 27. Since the inception of the game, the priests first held a record of 3-0 — but were upset by the seminarians in South Bend last December. This year the seminarians, coached by Samuel Anderson, attempted to secure back-to-back wins, while the priests, coached by Father Jacob Runyon, sought to reassert their dominance on the hardwood.

Over 2,000 spectators, a record for the event, filed into the school’s gymnasium as the priests and seminarians made some warm-up shots. After a prayer and the national anthem, the game began. Throughout it, the priests trailed the seminarians by a small margin. Father Matthew Coonan exerted his authority on the court, scoring a number of points for the priests, but seminarian captain Benjamin Landrigan repeatedly drove the ball up the court to provide opportunity and a slim lead for his team. 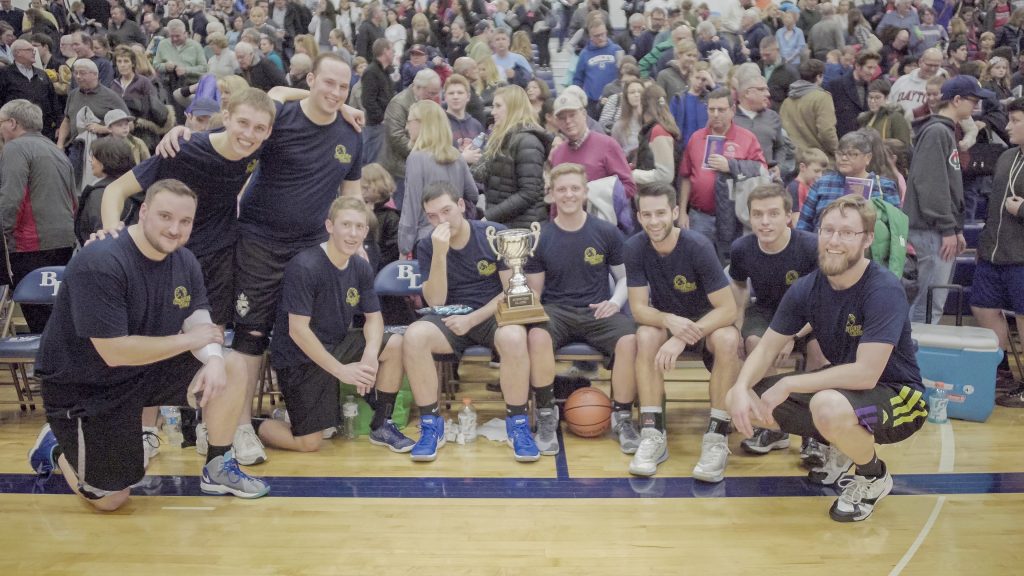 The two-time reigning champions of the Cupertino Classic, the seminarians of the Diocese of Fort Wayne-South Bend, pose with their trophy following the Dec. 27 basketball game at Bishop Dwenger High School in Fort Wayne. — Nate Proulx

Between plays, emcees Bobby Krisch and Father David Huneck offered comedic commentary, the latter often making groan-worthy puns. The game brought priests and fans from parishes across the diocese, and as players passed the ball to their teammates, the crowd waved creative homemade signs to cheer on their parish priests and seminarians; though, according to Father Huneck, it seemed Father Mark Gurtner had a monopoly in terms of fans.

The seminarians retreated to their locker room at halftime, which found them leading by four points. After the players left the court, the Father Solanus Casey Vocation Society presented diocesan vocation director Father Andrew Budzinski with a $2,500 check for the seminarian education fund, which helps the diocese offset the cost of the education of its future priests.

After Father Budzinski accepted the gift, students from Bishop Dwenger led a half-time mini-game, with help from the black-eyed Bishop Dwenger mascot, Tuffy. Kids from the crowd were welcomed to the center circle to candy canes from one cup to another, with a catch; they had to move the candy canes only by using a candy cane that they held in their mouths. After discovering a successful strategy of hooking multiple candy canes at a time, eighth-grade student Peter Litchfield walked from the circle victorious, clutching a candy trophy.

The dynamic of the second half reflected that of the first. Father Matthew Coonan would drive down the court, then Landrigan would rebound to turn possession over to the seminarians.

While the game remained competitive, the players made sure to have some fun. After one particular play, Father Matthew Coonan showed off some dribbling tricks, which resulted in accidentally hitting a referee with the ball.

The priests still tightly trailed the seminarians near the end of the game. With four seconds left, the priests fouled. Landrigan stood on the free throw line to seal the game: He made his first shot, then his second. The priests drove the ball down the court, but the final buzzer sounded. The seminarians were triumphant, winning the match 51 to 47.

Although they suffered their second consecutive loss, the priests congratulated their future brother priests with handshakes and hugs.

As the celebrations drew to a close, Father Muhlenkamp led the gymnasium in a sung Salve Regina prayer to end the exciting night.