Christmas traditions, no matter how small, impact individuals, families, and societies in major ways. Whether it is something as widely practiced as decorating a pine tree, or as specific as the particular order and placement of stockings on the mantle, these traditions play a significant role in carrying families, cultures, and the Catholic faith to future generations.

Secular Christmas traditions have the power to unite communities of different faiths and backgrounds. Some writers have argued that President Ulysses S. Grant established Christmas as a federal holiday to unite the ideologically opposed North and South in the aftermath of the American Civil War. This presidential action, perhaps, opened the door for Christmas celebrations to propagate among Americans in the generations to follow.

Still today, secular Christmas traditions connect ideologically opposed Americans to one another through common songs, celebrations, and foods. Recently, thousands in Fort Wayne gathered to watch the illumination of the giant Santa Claus display downtown. Surely, these festive residents do not share common stances on political or religious issues, but they all united to participate in their common and long-standing Christmas tradition. 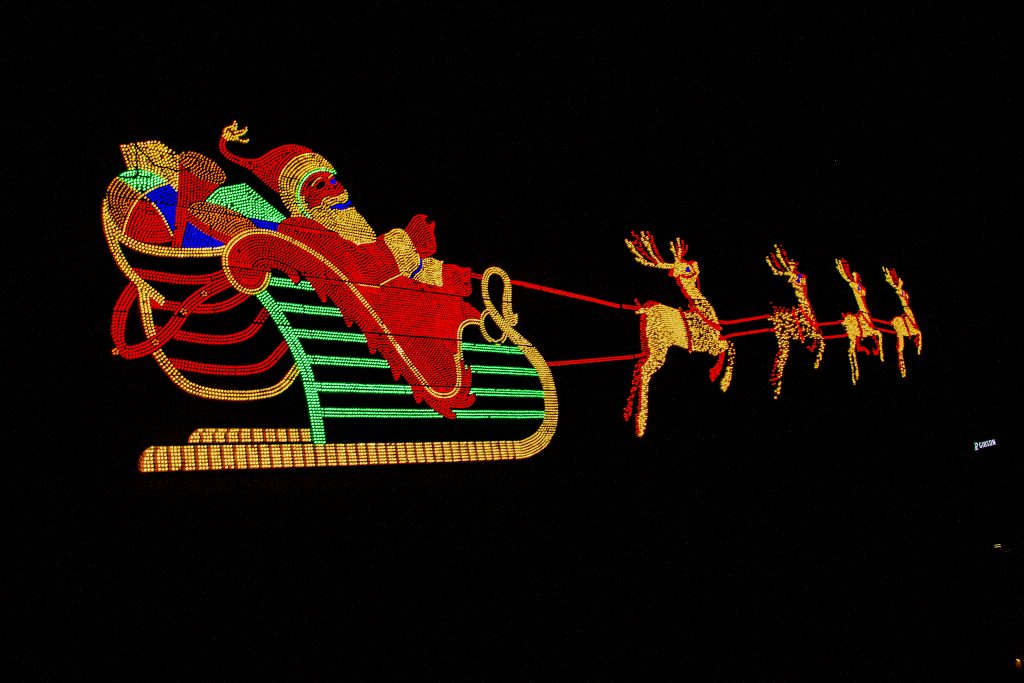 Joshua Schipper
The iconic Santa Claus and his reindeer light up the side of the PNC building on Main Street in downtown Fort Wayne. The lighting during Fort Wayne’s Night of Lights every year on Thanksgiving Eve is a tradition for many around the area.

Family-specific traditions, too, become especially prevalent during the Christmas season, and they can range from totally unplanned to fully intentional. For example, a recently married couple decorating their new home together may haphazardly place the gaudy nutcracker that they received as a wedding present on an inconspicuous shelf in their living room. After a few years, they will notice that they put the nutcracker back in the same place every Christmas. Thus, the initial inadvertent placement of this decoration has become an irreplaceable and necessary Christmas tradition within their young family. Other family traditions receive more attention in their conception. Maybe the head of the household chose to cook an annual Christmas turkey — a delicious tradition that his family now looks forward to every year.

Unlike family and secular Christmas traditions, Catholic traditions extend far into the depths of recorded history, and more recent religious traditions date back even farther than many secular American traditions. The liturgical season of Advent, itself, dates back to the 5th and 6th centuries. Items like Advent wreaths, while more recent, are traditions that have been included in the Catholic cultural canon in relatively recent centuries. Smithsonian Magazine suggests that the first “Nativity scene” was created in the year 1223, a feat often credited to St. Francis of Assisi.

Many of these traditions, whether secular, familial, or Catholic, represent something greater and invisible. The annual lighting of the Fort Wayne Santa Claus display is an outward and visible sign of an underlying start to the secular holiday season. Familial traditions, like decorating a Christmas tree in the same style or manner every year, may be an outward sign of the invisible reality of the continuity of family from year to year, and from generation to generation.

In order for these traditions to last, societies, families, and religious institutions must pass the tradition on to the next generation. Just as the family patriarch passes his intricate turkey basting techniques on to his children, the Church, too, hands its traditions and sacraments to new generations with the hope that these practices will continue to unite and strengthen it until the end of time.