The Year of St. Joseph, a religious initiative declared by Pope Francis, lasted from Dec. 8, 2020, until Dec. 8, 2021, to remember “the 150th anniversary of the declaration of Saint Joseph as Patron of the Universal Church,” as Vatican News put it. This great saint surely stood out as an intercessor for many of last year’s prayers.

Just because it is now five months into 2022, doesn’t mean honoring St. Joseph has ended. On April 30, the day before the Feast of St. Joseph the Worker, all are invited to take part in the Diocese of Fort Wayne-South Bend’s The Way of St. Joseph Pilgrimage.

Beginning at St. Joseph Church in Mishawaka and ending at St. Joseph Church in South Bend, the journey will be a total of five miles. The day will begin with 7 a.m. Mass and adoration at the Mishawaka parish, followed by the church’s pastor, Father Chris Lapp, saying a prayer at 9 a.m. before beginning the pilgrimage. The trek will follow the St. Joseph River along the East Bank Trail. Upon completion, a prayer service will be offered at noon in the church, where intentions held during the pilgrimage can be offered up. 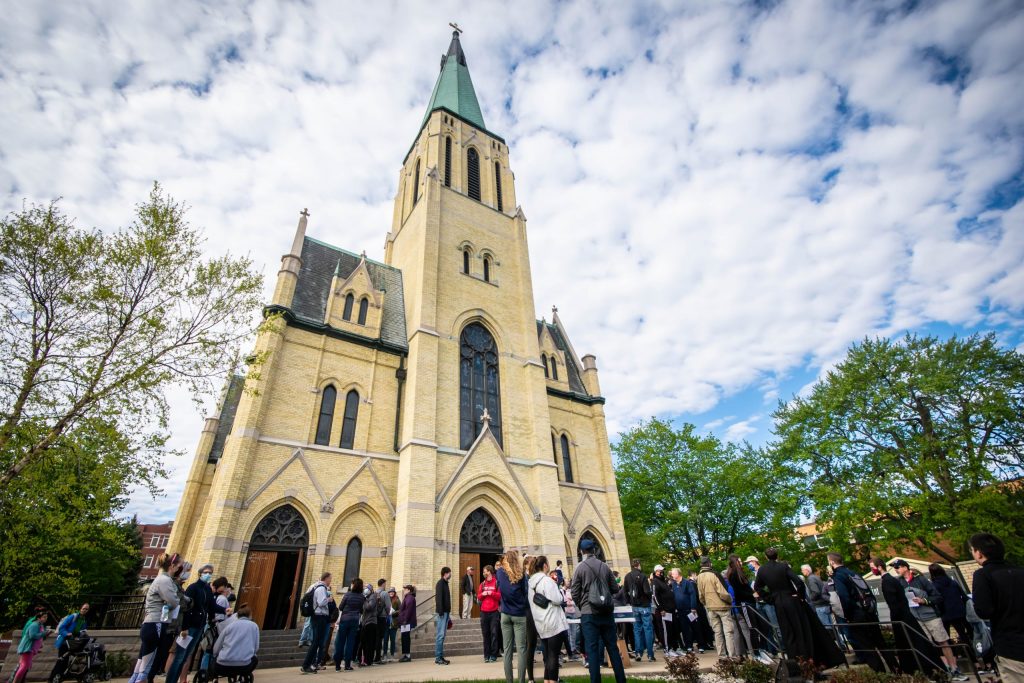 Photos by Molly Gettinger
Pilgrims gather outside St. Joseph Parish, Mishawaka, in 2021 for the start of the inaugural Way of St. Joseph pilgrimage. Participants were greeted with refreshments, rosaries, pilgrimage wristbands and booklets, which were stamped at each of the locations where pilgrims paused for prayer.

All are encouraged to attend, but for those physically unable to participate for the whole journey, several designated posts have been laid out for attendees to join along the way. Two miles from the pilgrimage’s end lies a parking lot by Veteran’s Memorial Park. Here, travelers can unite with those already on the trek at approximately 10:30 a.m. A half hour later, at around 11 a.m., people can also join the pilgrims at Joe Kernan Park, which is a mile from the finish. About fifteen minutes later and with less than half a mile to go, people can join in at Howard Park.

Will Peterson, President of Modern Catholic Pilgrim and co-coordinator of the pilgrimage said it is at this final entry spot where a reflection on St. Joseph’s life will be offered in both English and Spanish. Lunch will be available for purchase after the walk and prayer service, and a free shuttle will take participants back to their cars.

Peterson described the main reason behind the pilgrimage’s conception. “The Way of St. Joseph was created to provide the people of the Diocese of Fort Wayne-South Bend with an opportunity to practice one of the oldest traditions of the Catholic faith – the walked pilgrimage – to celebrate the Year of St. Joseph.”

Last year, an anticipated 100 people were expected to come to the pilgrimage, said Sean Driscoll, Director of Religious Education for St. Joseph Parish in South Bend, but it was a pleasant surprise when roughly 400 pilgrims completed all or part of the journey. As a way to safely engage the community during the pandemic-stricken Year of St. Joseph, this activity was a successful approach in honoring the saint outdoors and in great weather, continued Driscoll.

He also stated that because the first walk channeled such positive spirit, it would be “imprudent to not continue in years to come.”

Driscoll himself was present during the second half of last year’s pilgrimage and said that it was a great sight to see both those whom he recognized as well as those whom he didn’t. He called it a “wonderful display of the breath of the Body of Christ,” and was especially excited to witness the great reverence shown toward St. Joseph.

Peterson shared that, for him, “the most rewarding experience at last year’s pilgrimage was seeing all the children taking part and watching them bring up their written intentions to St. Joseph during our closing prayer service at St. Joseph South Bend. I’ll never forget seeing a toddler girl being led by her older brother to drop their drawings of St. Joseph in the basket at the statue’s feet.”

Echoing the purpose of the pilgrimage, Peterson concluded: “It may no longer be the Year of St. Joseph, but we still have so much to learn from the head of the Holy Family, and we have the great fortune to bring our prayers and intentions to him for his intercession while deepening our faith and building community from across the diocese.”

For more information about the pilgrimage, visit diocesefwsb.org/event-promotional-resources/#Pilgrimage. Registration is greatly encouraged.