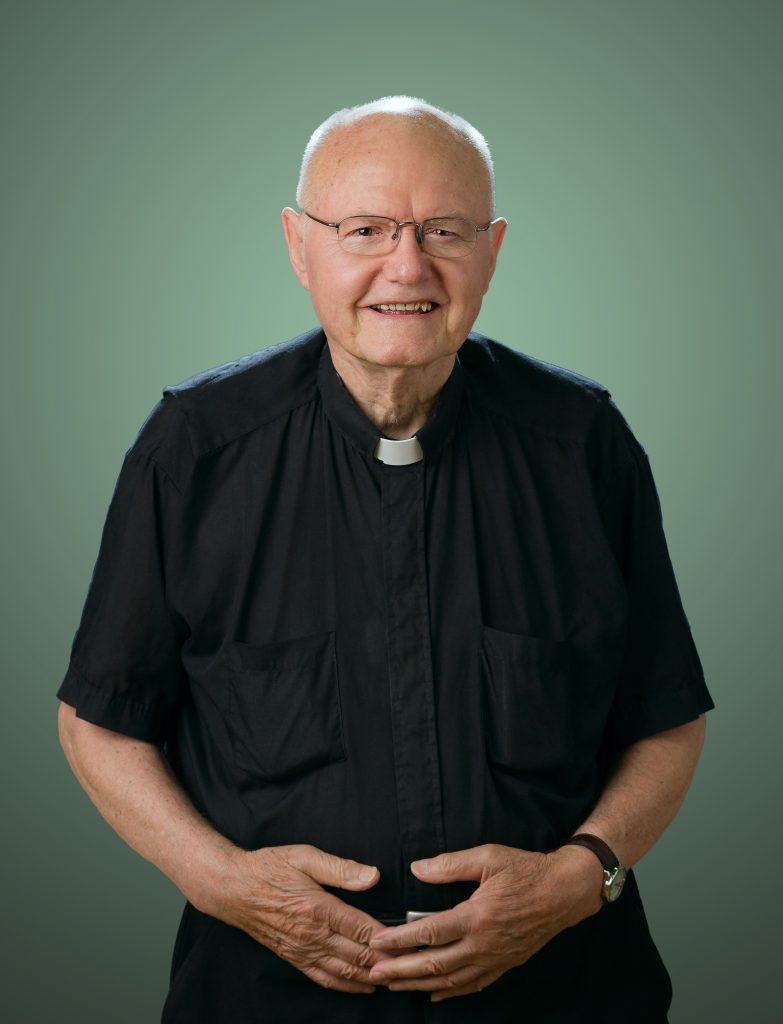 Father Jacob Gall believes people need to base their life on the rock of Jesus Christ. He has relied on that rock during a long and full life.

Father Gall, 95, now of Elkhart, marked his 60th anniversary as a priest in May. It has been a rewarding vocation he didn’t begin until well into adulthood.

Born June 21, 1927, he started life on his family’s large farm near Milford, north of Warsaw. His parents lost that farm during the Great Depression, but bought 40 acres southwest of Warsaw where they raised corn, cattle, hogs and chickens. The family later added a second farm between Culver and Plymouth, where they grew cucumbers to sell for pickling.

Father Gall grew up with a strong faith life, but not Catholic. His father was a part-time Church of God pastor, and the family attended a Church of God congregation near their farm. The future Father Gall began pondering faith from an early age.

As a boy, he remembers asking his mother about the meaning of eternity. He will always remember her answering him by sharing a story from her family’s Dutch heritage: God made a little bird that never dies. The bird has the job of picking up one grain of sand at a time from the Earth’s oceans, rivers and lakes and taking each grain to the top of a mountain. When the bird has moved all of the grains of sand to the mountaintop, that is just the beginning of forever and eternity, his mother said.

As a youth, Father Gall also spent hours thinking about spiritual life while directing a two-horse team plowing his family’s farm fields with a single-blade plow.

“I was always impressed by Jesus’ words, ‘I am the way, the truth and the life,’” he said.

At age 17, he asked his father to sign for him to enlist in the U.S. Navy before turning 18. His father did.

“We believed in God, we believed in family and we believed in country, and we would give our lives for any of them,” Father Gall recalled. One of his two brothers served with the U.S. Army in Europe during World War II. He also had four sisters, though one was stillborn.

Father Gall’s seven years of Navy service took him to Guam, the Aleutian Islands, Italy and United Nations duty from December 1948 to January 1949 to maintain peace near Jerusalem after creation of the nation of Israel. Father Gall finished his Navy career as a corpsman at a U.S. military hospital in Yokosuka, Japan, which treated U.S. Marines wounded during the Korean War.

During his final year of service in Japan, he joined about 10 other hospital corpsmen in a Bible study. He also read the book “Faith of Our Fathers,” which shared the history of the Catholic Church and the Protestant Reformation. The book inspired him to take catechism classes with a Catholic chaplain.

“I was always interested as a Christian in going back to the time of Jesus,” he said, noting how other Christian faiths began after the Reformation.

Father Gall was baptized a Catholic in April of 1952 by a base chaplain and was confirmed in May by a Japanese Catholic bishop. After baptism, he felt a strong call to explore a vocation to the priesthood. He pursued that call after returning home in June of 1952.

Then age 25, he completed high school at Plymouth High School and attended three years at Our Lady of the Lake Seminary on Lake Wawasee near Syracuse. He continued with six years of study at St. Meinrad Seminary in southwest Indiana. He was ordained on May 26, 1962, a few weeks prior to his 35th birthday.

He began his ministry as Associate Pastor at St. John the Baptist Parish in New Haven. He then served for a few years each at Sacred Heart Parish in Fort Wayne, St. Mary of the Assumption Parish in Decatur and St. Thomas the Apostle Parish in Elkhart.

He moved on to spend nearly 14 years as pastor at St. Peter Parish in Fort Wayne. One highlight included leading the parish in preparing its old school building for use by Montessori and Head Start preschool programs.

In his next assignment, Father Gall served more than 16 years at Immaculate Conception Parish in Kendallville before retiring at age 77 in August of 2004. However, he continued helping out at parishes on weekends and during priests’ vacations.

In 2010, at age 84, he took on the responsibility of celebrating Mass on Saturday evenings and Sunday mornings at St. Mary of the Angels Oratory at Big Long Lake in LaGrange County. He retired from making that 100-mile round trip in June of 2017.

Father Gall believes one of priesthood’s greatest gifts is being able to consecrate bread and wine to transform them into the body and blood of Jesus Christ, just as the Lord instructed His apostles to do.

Father Gall has always turned to the Scriptures for guidance in his life and ministry.

He finds great encouragement in the story of Jesus washing the feet of His disciples. By speaking of washing others’ feet, Jesus urges us to help others with their needs, Father Gall explained. By helping others, we also are helping the whole Church.

He also draws strength from St. Paul’s Letter to the Galatians, especially chapters 5 and 6. The passages speak of God’s gift of the Holy Spirit and how to live a good and holy life.

“Without the Spirit,” Father Gall said, “we can’t please God and we can’t receive all of the gifts He wants to give us.”

Though he has had some heart and lung problems, Father Gall doesn’t worry about the future.

“Whenever the Lord wants me, that will be the best,” he said. “I don’t know what is the best. Only God knows what He wants me to do. I accept His yoke.”

Citing the Gospel verses of Matthew 11:28-30, Father Gall notes that Jesus said, “‘Come to me, all you that are weary and are carrying heavy burdens, and I will give you rest. Take my yoke upon you, and learn from me; for I am gentle and humble in heart, and you will find rest for your souls. For my yoke is easy, and my burden is light.’”

“Jesus invites us all,” Father Gall added, “and if we don’t take it up, that’s our problem.”