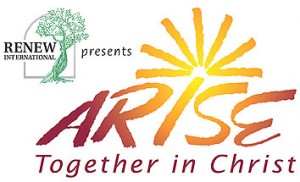 SOUTH BEND — Renowned speaker and bestselling author Dr. Scott Hahn and his wife Kimberly will present talks at the 2012 Diocese of Fort Wayne-South Bend Women’s ARISE Conference on Sept. 15 at the Century Center in South Bend. The conference theme is “Chosen” and will begin at 9 a.m. with registration followed by a 9:30 a.m. Mass celebrated by Bishop Kevin C. Rhoades.

In a Sept. 20, 2009 Today’s Catholic article on Dr. Scott Hahn’s appearance at St. Jude Church in South Bend, he detailed his early faith journey beginning as a teenager in trouble with the law. After several appearances in the juvenile court system, Hahn explained that he went on a retreat so he could get to know a girl he admired. At the retreat he recalled a speaker who kept pointing to the cross and saying Christ paid a debt He didn’t owe.

“So by the end of the weekend I decided to open my heart and make Christ my personal Savior and to give my life to Him, as Christ had for me,” Hahn said.

Hahn received a bachelor’s degree with a triple major in theology, philosophy and economics at Grove City College, Pennsylvania. While attending Grove City College, Hahn met his future wife Kimberly, who he referred to as “the most beautiful girl on campus.”

They later married and moved to Boston where Hahn earned a master’s degree in theology at Gordon-Conwell Theological Seminary. When he finished seminary, he and his wife moved to Fairfax, Va., and Hahn began his first job as a Presbyterian minister.

It was while studying for his doctorate in Biblical Theology at Marquette University in Wisconsin that Hahn attended a Catholic Mass and was struck by how saturated the liturgy was with Scripture. When the priest announced the words of consecration Hahn whispered under his breath, “My Lord and my God, I know that is you.” Hahn earned his doctorate from Marquette in 1995.

At the Easter Vigil of 1986, he entered the Catholic Church. Hahn recalled, “my wife Kimberly, who had originally objected to the idea of his Catholic conversion, loved how the Old Testament Scriptures read during the Vigil, connected to the new covenant in Christ’s Resurrection in the New Testament.”

It wasn’t until a Bible study led by Hahn in their home that Kimberly finally understood why the Catholic students in attendance picked up on the Scriptures more easily than she did. “We’ve studied the menu for years; they are enjoying the meal.”

Kimberly “came home” to the Catholic Church at the Easter Vigil in 1990.

She received her bachelor’s degree in communication arts from Grove City College in 1979 and a master’s degree in theology from Gordon-Conwell Theological Seminary in May 1982.  Kimberly has collaborated with her husband on a book entitled “Rome Sweet Home: Our Journey in Catholicism,” which details the couple’s journey to the Catholic faith.

Dr. Hahn will present two talks at the ARISE conference in September. His morning presentation is titled “Hail Holy Queen” during which he will explain why Mary is rooted in what Catholics know and believe about her Son. Hahn will also explain from Scripture why Mary, the Queen Mother, is an integral part of Christ’s Kingdom.

Following lunch, Kimberly will deliver her presentation on “Women’s Roles in the Church.” She will address understanding God’s gift to women and their ministry roles, and the reasons for an all male clergy within the Catholic Church.

The conference will conclude with Dr. Hahn’s talk on “The Bible, the Eucharist and the New Evangelization.” Among the subjects of this presentation are Blessed John Paul II’s emphasis that Catholic evangelization is Eucharist based, and ways Catholics can share their faith with family members, friends and coworkers.

The Sacrament of Reconciliation will be available at the conference with confessions being heard in the Discovery ballroom of the Century Center from 11:30 a.m. to 3:30 p.m.

The $35 registration fee includes lunch, and forms may be found at www.diocesefwsb.org/arise. There is a $5 parking fee at the Century Center. The registration deadline is Sept. 7.