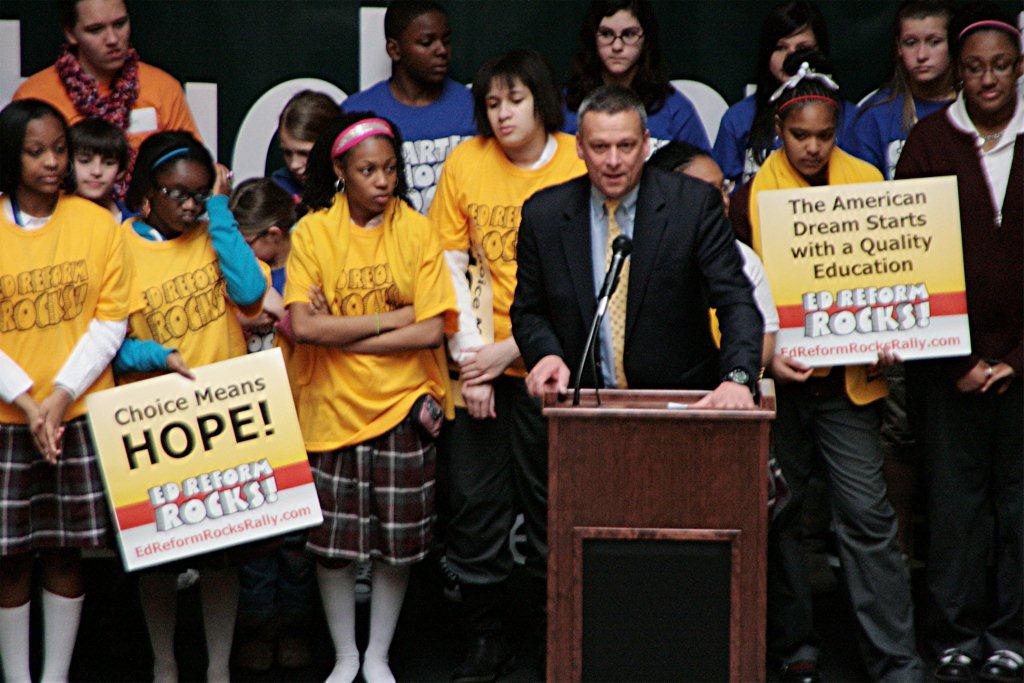 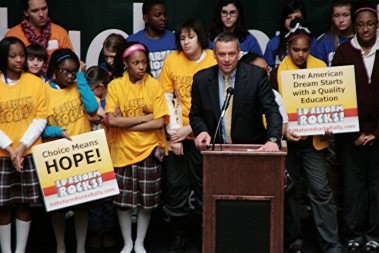 Dr. Tony Bennett, Indiana superintendent of Public Instruction, discussed the merits of the education reform legislation during a March 30 school choice rally at the statehouse. Dr. Bennett is surrounded by charter school students from across the state.

This chant, which echoed repeatedly throughout the statehouse, was generated by a crowd estimated at 800, some of whom were school children, during a March 30 rally at the statehouse.

Following the rally, House lawmakers passed the school scholarship bill HB 1003, 56-42, which allows eligible families to use public dollars to attend a private school of their choice. The Indiana Catholic Conference supports the bill.

Superintendent of Public Instruction Dr. Tony Bennett, addressing rally participants, said, “In all the time I spent coaching basketball, I have never enjoyed this time of year as much as I am enjoying this year, when we turn around education.

Speaker of the House Brian Bosma, R-Indianapolis said, “This is about our constitutional obligation to give every student the most educational opportunities that they can receive. This legislation is about options. We are going to see it though until the job is done.”

Sen. Earline Rodgers, D-Gary, said, “As a former teacher, I can never get away from asking a question. What takes time, pressure and heat?” The answer from the crowd was “a diamond.”

Former chancellor of Washington, D.C. Public Schools, Michelle Rhee, and founder and CEO of Students First, an education reform advocacy group said, “We have the opportunity in Indiana today for this state to be leading the charge for education reform. We can not make this issue about partisan politics. We have a Republican governor and a Democrat President who support school choice. I’m a Democrat.”

Rhee said she was not a supporter of school choice until she was responsible for 25,000 students in the Washington, D.C., school system.

Rhee said she had mothers coming to her every day asking for a choice. “I was sending my own children to a private school because I could,” said Rhee. But for those who could not afford it, Rhee said, “Who am I, as chancellor of public schools, to deny these children a $7,500 voucher so they could go to the school of their choice. I could not look these mothers and their children in the eye and tell them, ‘give it five years for the school to improve.’

“Children can’t vote or contribute to campaigns, so they are voiceless,” said Rhee. She said that when these courageous Hoosier lawmakers take heat back in their districts for going against the status quo of the education establishment, they should remember they are representing “the next generation of constituents and voters.”

Gov. Mitch Daniels addressed the crowd on a big screen television. “We have a tremendous opportunity to move public education forward. We want to ensure a top quality teacher in every classroom. We want to increase the number of charter schools that are bringing great innovations to the classroom. We want to move in and turn around schools that are the worst performing,” he said. “I want to thank you so profoundly for coming to show your support, for our kids and their futures. The special interest groups who oppose any change of any kind do not represent, thank goodness, the majority of Hoosiers and they certainly do not represent the interests of children.”

Sen. President Pro Tempore, David C. Long (R-Fort Wayne) noted the striking difference between this rally and previous rallies this year. “It’s so nice to see a crowd ‘for something’ rather than ‘against everything.’”

House Bill 1003 now moves to the Senate for further consideration.