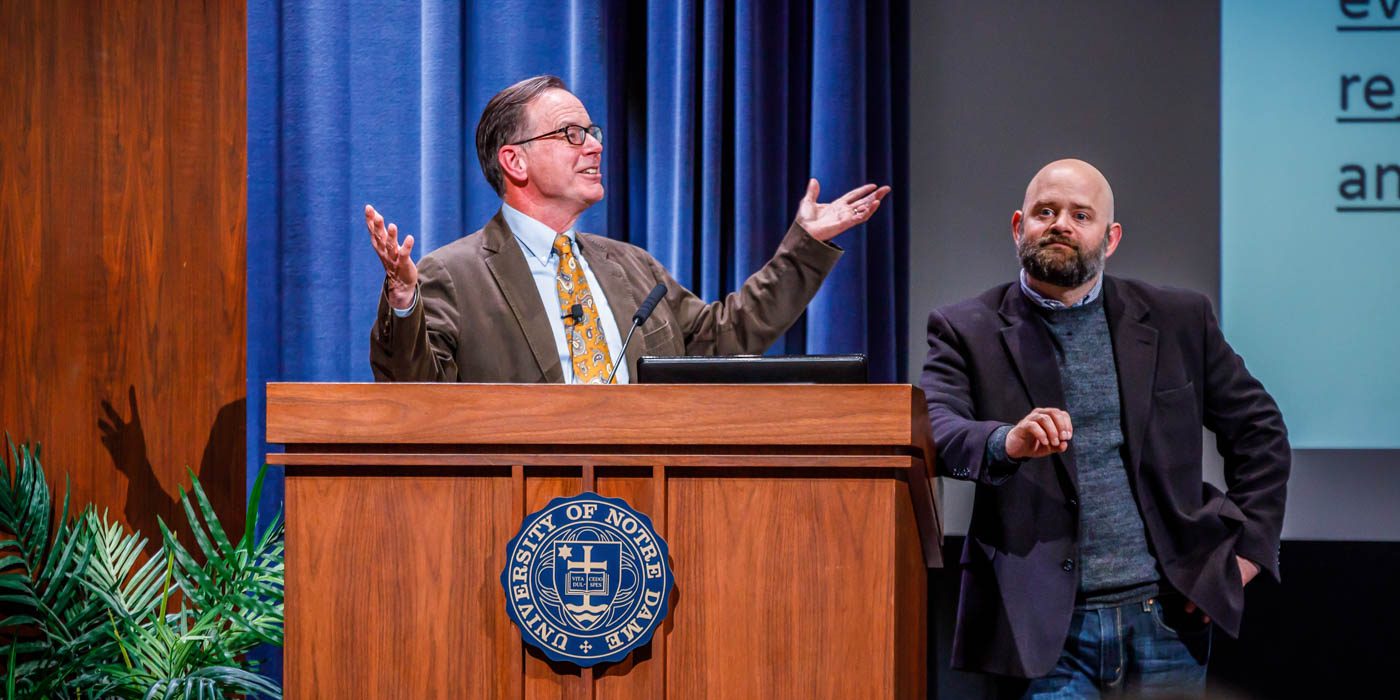 Deep explorations of good and evil, as they operate in individuals, society and today’s ethical dilemmas, prompted diverse cultural references — including the television show “Breaking Bad” and the Disney movie “Frozen” — at a recent University of Notre Dame conference. 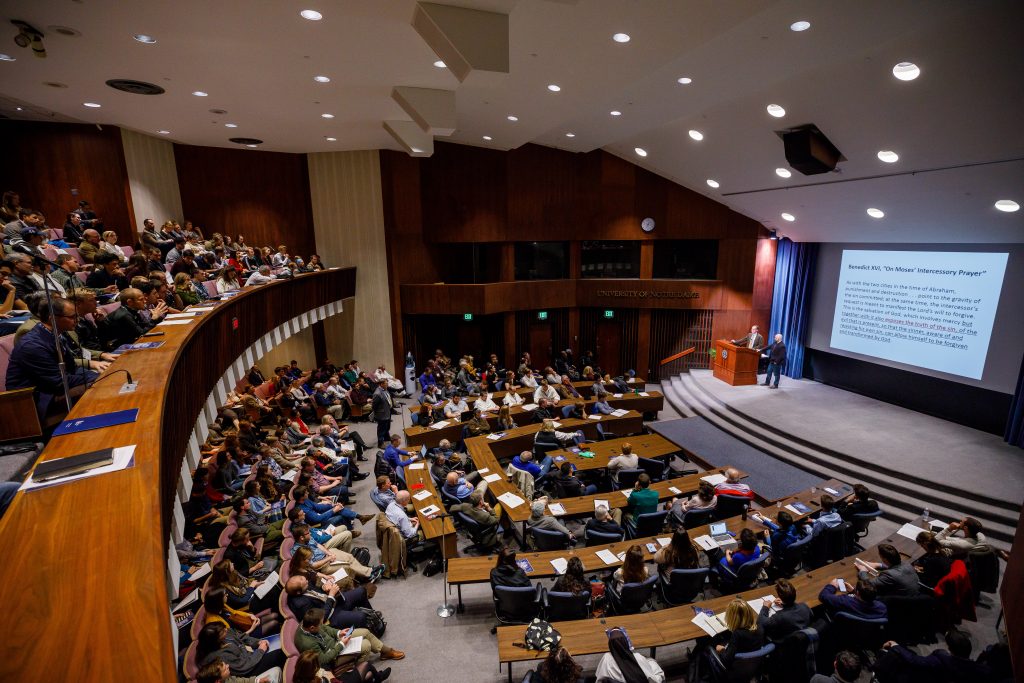 The university’s Center for Ethics and Culture convened more than 100 speakers and about 800 attendees for the fall conference Nov. 9-11. This interdisciplinary and international gathering, which annually showcases the Catholic moral and intellectual tradition, marked its 18th year with the title, “Through Every Human Heart.”

Center director Carter Snead, a professor of law and political science, told those attending that the title is taken from “The Gulag Archipelago” by Nobel Prize-winner Aleksandr Solzhenitsyn. The Russian historian wrote of learning that “the line separating good and evil passes not through states, nor between classes, nor between political parties either, but right through every human heart.” 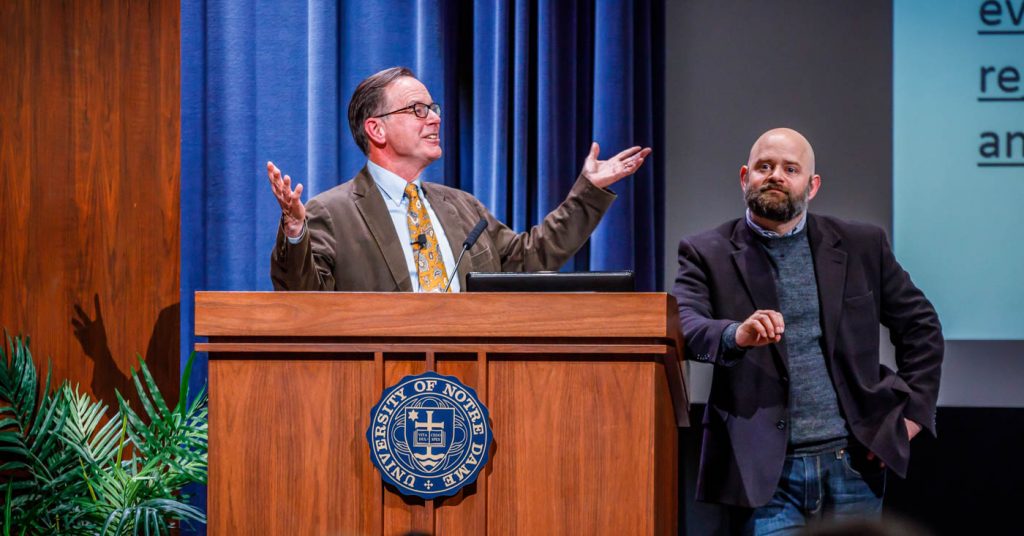 Guests at the three-day meeting included students as well as thought leaders from numerous schools and organizations, such as Bishop Godfrey Onah from the Diocese of Nsukka, Nigeria; Gary Anderson, a Notre Dame theologian; and Richard Doerflinger, a commentator and former associate director for pro-life activities for the U.S. Conference of Catholic Bishops.

Anderson, who is the university’s Hesburgh Professor of Catholic Theology, used a clip from the television series “Breaking Bad” as an illustration during his Josef Pieper Keynote Lecture titled “Is the God of the Old Testament Evil?”

Assuring the audience that his summary answer to that question was “No,” Anderson showed a scene portraying a killer’s instinctive desire for people to recognize the evil nature of his actions. Anderson then discussed scriptural scenes in which God expressed His just motive for punishment alongside a merciful responsiveness, when His people recognize their sinfulness and intercede for each other.

Evil cannot be ignored, Anderson said, pointing to Old Testament events such as Moses’ dialogue with God when the Israelites began idolizing a golden calf. Moses, as a representative before God, asked Him to forego punishing His people, and God relented.

Anderson quoted an analysis by Pope Emeritus Benedict XVI regarding God’s desire for human participation in acknowledging sin and fulfilling His desire to forgive: “Intercessory prayer makes divine mercy so active within the corrupted reality of the sinful man that it finds a voice in the supplication of one who prays and, through him, becomes present where salvation is needed.”

In a separate panel presentation, discussing sacrificial love as a response to a broken world, Doerflinger spoke on “Warming the Frozen Heart: Self-Deception and Self-Sacrifice in Disney’s ‘Frozen.’”

Referring to the 2013 animated musical loosely based on Hans Christian Anderson’s “The Snow Queen,” Doerflinger said interpretations of the popular, cheerful songs don’t coincide with the actual story being told, which sees characters struggling to rise above painful circumstances. The story is ultimately about “the education of [Princess] Anna in what love is,” as Doerflinger described it.

Several characters in the film place themselves in danger to help Anna as she tries to save the snowbound kingdom of Arendelle, Doerflinger pointed out. Anna, although stricken with a frozen heart by her snow-queen sister Princess Elsa, climactically (and climatically) surrenders her own life to save Elsa. This deed of familial love brings healing and happiness to both sisters and to the kingdom. As Olaf the talking snowman comments, “An act of true love can thaw a frozen heart!”

Doerflinger concluded: “In its treatment of the complexity of good and evil and its message about the power of self-sacrificing love, ‘Frozen’ may be the best popular Catholic movie in recent years.”

The film includes several subtle Catholic references, but there is no proof the script intentionally affirms a Christian message, Doerflinger said. “I think the reality is that this message of ‘you save yourself by giving yourself to others’ is something embedded deep in our souls. It is the answer to life’s problems, and every once in a while, somebody stumbles onto that.”

The conference included other notable presenters and attendees as well. Bishop Onah asked in his talk, “When is Poverty a Virtue and Wealth a Vice?” Harvard professor Jacqueline Rivers placed academia under the microscope with a speech titled, “Social Scientists and Values: Scholarly Objectivity or Passionate Advocacy?” The center’s distinguished research fellow Alasdair MacIntyre, reflected on such terms as “bad” and “evil” in his talk, “From Grammar to Metaphysics, from Adjectives to Evils.”

A number of initiatives at the Center for Ethics and Culture focus on the Catholic intellectual heritage through teaching, research and engagements on- and off-campus. The center’s website is ethicscenter.nd.edu.