By Jill A. Boughton 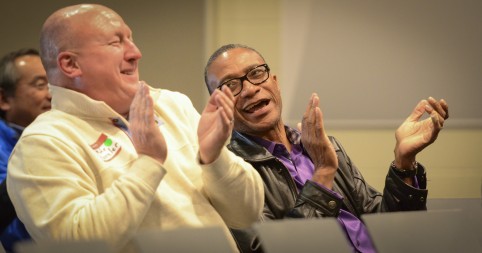 A diverse group of the faithful from around the greater South Bend area gathered at Saint Joseph High School Saturday, Nov. 12, for the annual black Catholic Sankofa conference. In addition to Mass and music, participants shared personal stories of faith and race and discussed both topics through the lens of current events.

Visit the photo gallery for more photos from this event.

Asked how she was doing, an elderly African-American church member replied, “I’m somewhere between ‘Lord, have mercy!’ and ‘Thank you, Jesus!’” Deacon Mel Tardy told this story to explain the title of his keynote address at the annual Sankofa gathering held Saturday, Nov. 12, in South Bend.

“Sankofa” is a West African term meaning “go back and fetch.” It signifies taking hold of the past in order to move confidently into the future. A group of Catholics, diverse in age and ethnicity, kicked off Black Catholic History Month by coming together at Saint Joseph High School to share what they have experienced on their individual and collective journeys to overcome racism. Called to order by drumming, participants were welcomed by Brother Roy Smith, who introduced Tardy.

One theme that emerged repeatedly during the day was the importance of listening attentively and nonjudgmentally to each other’s stories, so Deacon Tardy began by telling his own. Raised in New Orleans, he didn’t discover until he matriculated at Notre Dame that most people feel a mismatch between “black” and “Catholic.” Campus security stopped him several times for “walking or biking while black,” he said, and he felt too black for his white friends and too white for his black friends. Not until he read W.E.B. Du Bois did he find a description of the “double consciousness” he was experiencing by trying to hold together being black and being American.

Deacon Tardy used photos ranging from a lynching right here in Indiana to Martin Luther King’s early arrest for a traffic infraction to sketch the history of African-Americans in this country, pointing out that Christians were only able to justify owning slaves by regarding them as less than human. When we lump together all whites or all policemen, we make the same mistake, he pointed out. “If you stoop to their level, it’s like bowing to them.”

In their pastoral letter, the U.S. Bishops stated: “We live in a racist society,” where even the Church has been guilty of the sin of racism. The remedy is to privilege voices that have been marginalized. The result will be much more than a different style of music in our worship, the bishops said. It will lead to rethinking the Gospel and discovering anew the God who hangs out with the poor.

After the keynote address, participants broke into discussion groups to share their own experiences. During a series of workshops, the Gbologan family presented “A Taste of Africa: Stories from Togo;” representatives of the Office of Hispanic Ministry of the diocese talked about “Cultural Competencies in Shared Parishes;” Maria Stancati, Dismas House, explained “The Collateral Consequence of Having a Felony Record;” Sally Thompson, Urban Life Matters in Indianapolis, told her story of abortion, healing and forgiveness; and Cheryl Ashe addressed how the African-American marriage decline affects everyone. Participants also had the option of seeing a film about Venerable Sister Henriette DeLille, founder of a black religious congregation. 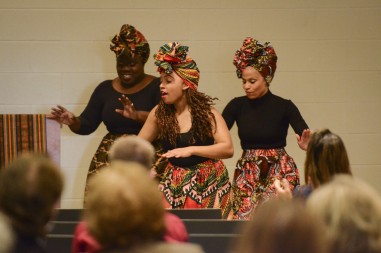 After lunch, they sang, clapped and celebrated with the West African dance company from IUSB. Then everyone formed a large circle for “Harambee,” or “Let’s pull together,” to share what they had heard and try to generate action steps for the future. Besides general principles like listening and sharing stories, study circles were recommended.

Sixty parishioners of St. Pius X have done such circles, using “Created in God’s Image: Sin and Racism and the Call to Conversion” based on a pastoral letter and workbook created by the Gary diocese. Other resources include books like Rev. Bryan N. Massingale’s Racial Justice and the Catholic Church and DVDs about several African-Americans being considered for canonization. Cheryl Ashe offered to show those films to parish groups or discuss how to help ex-offenders re-enter society.

The day concluded with Mass, led by Father Jerome Robinson from St. Rita in Indianapolis and Notre Dame’s Voices of Faith Gospel Choir.

The fifth annual Sankofa event was planned by the diocesan Black Catholic Advisory Board. Bishop Kevin C. Rhoades called those leaders together in 2012 to help the diocese more effectively meet the pastoral needs of Catholics of African descent, including evangelistic outreach, pride and unity.